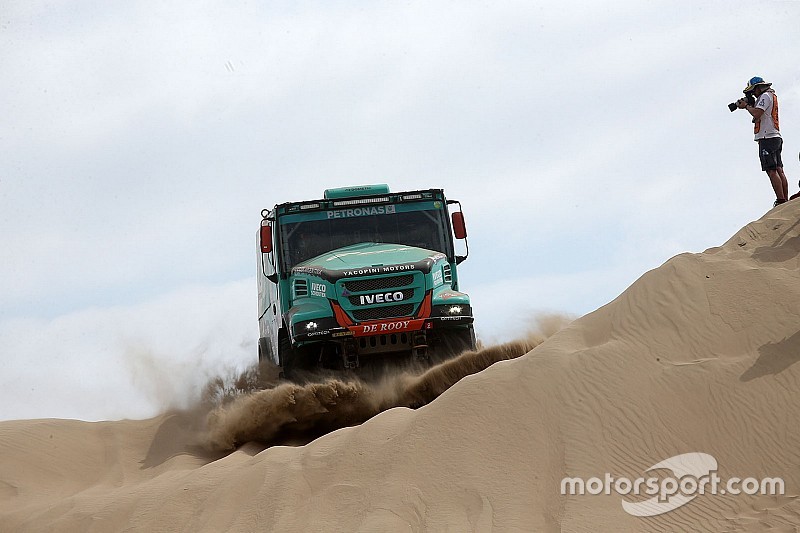 The Dakar Rally is a team effort. The Petronas De Rooy Iveco team knows it all too well, and has tripled its efforts for 2019 - with four crews, 32 staff members, all working towards one goal.

The team spirit is part of the DNA of the Dakar and is vital to the success of a professional team. There are no more watercarriers now but there is usually a member of the race team that is designated to support others if something happens during the stage.

At the De Rooy Iveco team, this role is covered by newcomer Maurik van den Heuvel. His support was crucial on stage 3, an extremely tough day for the Dutch outfit.

Among the four crews, only Federico Villagra managed to complete the 331km between San Juan de Marcona and Arequipa unscathed, finishing fourth on the stage and third overall.

One mistake in the dunes cos Gerard De Rooy an hour and a half, as he remained stuck in the dunes with one wheel suspended in air and the steering wheel broken.

He could continue after taking van den Heuvel's steering wheel, the latter instead waiting for the arrival of the service truck.

Despite the difficulties, the team remains very motivated. Nothing is over till the end, and with so many sandy stages everything is still possible.

1 goal
2 spare wheels per race truck
2 shock absorbers per wheel
3 people per race truck (driver -mechanic- navigator)
4 race trucks
8 service trucks
10 stages of the 2019 Dakar
32 team members in the De Rooy crew
100 tyres used during the Dakar
300 litres of Petronas oil (not used for the engine as it doesn’t need to be changed during the race)
800-litre fuel tank of the Iveco Powerstar truck
2,959 timed kilometres to be covered by trucks
5,000 horsepower of the Cursor 13L engine developed by FPT
5,000 newton-metres of torque
5,603 kilometres overall
8,400 kilos of weight of a single truck
20,000 spare parts carried by the service trucks on the Dakar
50,000 litres of fuel used for the race and the service trucks on the Dakar