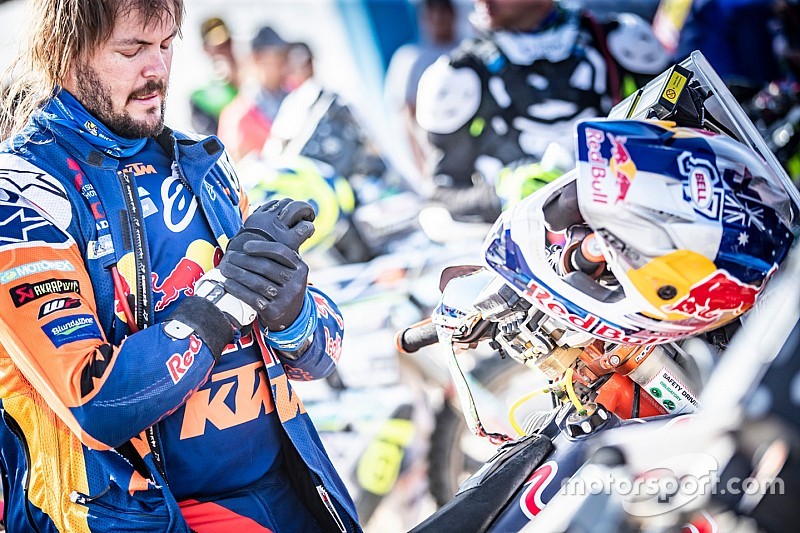 Reigning Dakar Rally bikes winner Toby Price is hoping to have 80 to 90 percent movement back in his injured wrist before the 2020 event kicks off next January.

The Aussie withstood intense pain en route to victory earlier this year, carrying a broken right scaphoid that had been freshly operated on throughout the gruelling trek across the Peruvian dunes.

Price even had to resort to using a makeshift device that held his KTM's throttle open on transport stages to get to the end.

Upon returning to Australia late January Price went straight back under the knife, a screw implanted during pre-Dakar surgery moving like a windscreen wiper and causing a fresh cavity in the scaphoid.

More than five months on, Price reckons he's now back to around 50-60 percent movement in the wrist. And if all goes well, he's targeting around 80-90 percent usage by the time the 2020 edition of the Dakar kicks off next January.

"It's all going really well," he told Motorsport.com. "The doctor we had work on it at Brisbane Private Hospital, Doctor Steve Andrews, says it has healed really well.

"At the moment I haven't got full movement, that's a little bit annoying. There is a lot of physio work, we need to work on it and keep at it. If it gets back to 80, 90 percent I'll be stoked. But at the moment we're probably running about the 50, 60 percent mark.

"We've got to be a little bit smart to try and be ready or Dakar again in January."

While an almost complete recovery for January is the primary target, Price admits that he's not sure if the wrist will ever fully recover to 100 percent movement.

"That's what I'd like to have to be able to do the everyday job of riding a motorcycle. Sure I want it to be back at 100 percent, but we're not quite sure," he said.

"At the moment I just haven't quite got the movement back that I need. In saying that, what I have at the moment is doable, I can still ride a motorcycle. There are no issues and problems.

"We're just trying to give ourselves a little more time to make sure it's right. I'm trying to give myself a bit more longevity in the sport, so my career doesn't come to a screaming halt very soon."

As part of his recovery Price has opted to skip the bike class at this week's Finke Desert Race in central Australia, instead focussing his efforts on the truck category.

"Finke is a good race for me to get some training and time on the bike, but it's also a big risk," he said.

"Nine times out 10 if you crash at Finke, you're going to have an injury that'll last at least six months. I love racing Finke, but if something goes wrong it puts Dakar in jeopardy.

"Dakar is my main bread and butter, it doesn't matter if you've got half your leg cut off or you've got a tiny cut on your finger, you need to make sure you're ready to go."

Dakar hopes to expand beyond Saudi Arabia in 2021