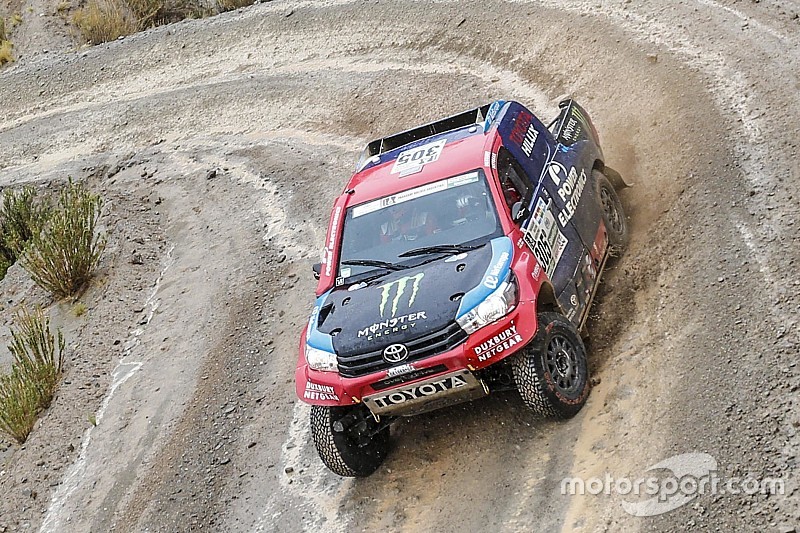 Nani Roma has conceded his Toyota Hilux would not be able to run with the Peugeot 3008DKR on pure pace in the remaining altitude stages of the 2017 Dakar Rally.

Fourth in the standings as the top non-Peugeot driver, Roma currently seems the driver by far likeliest to challenge the French marque.

The 2014 champion is sat five minutes off leader Stephane Peterhansel, and more than 30 minutes up on fifth-placed Mikko Hirvonen (X-Raid Mini).

Asked whether he could beat the Peugeots on pure pace in the remainder of the rally, Roma told Motorsport.com: “No. I realised it was impossible [to beat them] on speed, as Stephane passed me in a flat area.

"In high altitude, on speed [alone], it's impossible. At sea level, we're competing – but in this place, [it's] impossible.

The 2017 Dakar will remain at high altitude until the end of the Bolivian leg of the rally on Tuesday, with two more stages taking place in the country following the cancellation of Saturday's test.

Asked whether the plan was to try and stick with the Peugeots until more favourable altitudes, Roma added: “Yeah, this is for sure, but the problem is that we have [two] more days at high altitude. But we try to manage.

"The race is not finished, it's a long way to Buenos Aires. We saw these five days what happened to everybody - and we continue.”