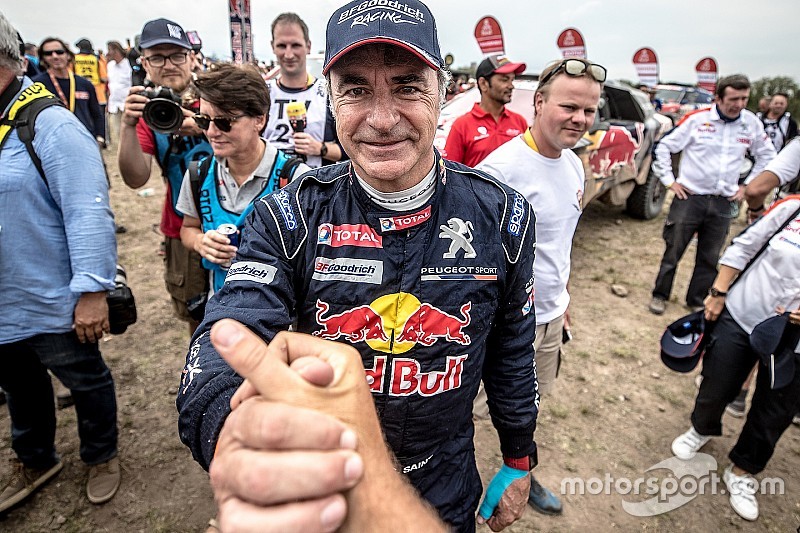 Dakar winner Carlos Sainz believes his son Carlos Jr took “revenge” on him this month for all the advice he has given him during his single-seater career.

Sainz Sr has been a regular fixture at his son’s side during his rise from karting to F1, and he still attends grands prix with the Renault driver.

However, speaking after taking his second Dakar victory this weekend, Sainz said their roles were reversed during the two-week rally.

“I talked to him every day before and after each stage and I think he has taken revenge on all the advice I have given him during all this time, because he has done the same during these last two weeks,” said Sainz Sr.

“[We talked about] the tactics of each day, he asked and commented that it was worse or better in each moment.”

Moments after his father won the event, Sainz Jr tweeted his congratulations.

Sainz Sr, who said the difficulty of this year’s event compared to the two editions of the rally he contested in Africa, added it was challenging to maintain the big advantage he had once teammate Stephane Peterhansel fell out of victory contention, due to the nature of the stages and the mental difficulties of trying to protect a lead in such a gruelling event.

“We have seen in this race that every day things happened and it was very hard,” he added. “Every day there will be a surprise, with traps. You have to be lucky. I have never run a race like this.

“It is difficult to win a race that lasts two weeks. When you win with this advantage [44 minutes], you have done the job well.

“My life has been the WRC and where I feel really comfortable and I enjoy it is in a [traditional rally] stage.

“We have seen it all in this rally, with a lot of [the route] outside [normal stages], which is the part where I feel less comfortable. It’s not easy when you have so much advantage to keep the rhythm.

“Sometimes when you go more slowly you can make mistakes and it’s harder to stay focused because you’re not used to being so careful.”

With Peugeot ending its Dakar programme Sainz’s future in the event is in doubt, but after his victory he said: “There’ll be time to think about it. Peugeot retires and we’ll see what we do.”

Walkner: "Luck was on my side" in Dakar triumph