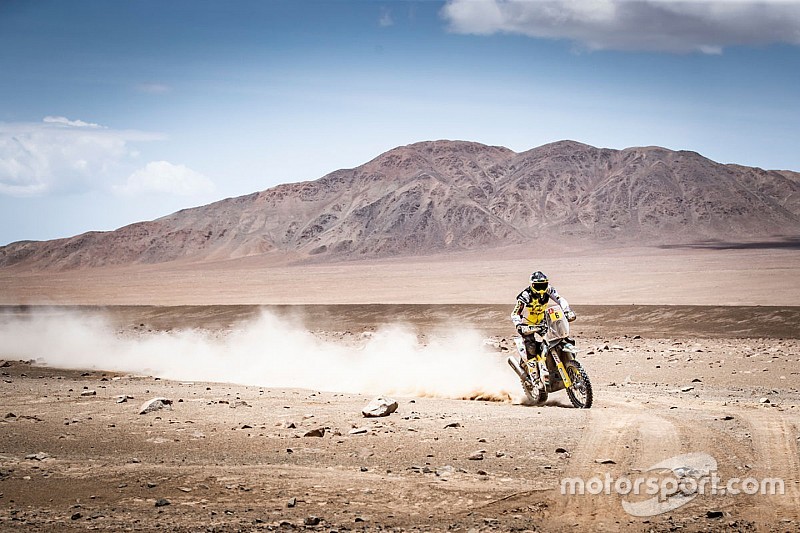 Pablo Quintanilla won a close fight against Kevin Benavides to top Stage 6 of the bike class in the 2019 Dakar Rally, and take the overall lead from Ricky Brabec.

The 336km stage, which was run between Arequipa and San Juan de Marcona, was dominated by Quintanilla and Benavides, the duo trading the lead multiple times.

Benavides had the upper hand early on, setting the pace in the first 84 kilometres, which was followed by a short neutralisation zone and then the rest of the stage.

Quintanilla soon stole the lead but the gap between them was less than a minute until the sixth waypoint, where the Husqvarna rider started to inch away.

He ended up with a 1m52s lead over Benavides, with KTM duo Matthias Walkner and Toby Price taking third and fourth, both over four minutes behind.

Brabec was fifth, seven and a half minutes slower than Quintanilla, the American losing his overall lead to the Chilean as a result, 4m38s down.

Besides Brabec, Price and Benavides are the only other riders within 10 minutes of overall leader Quintanilla.

Walkner rounds out a close top five with a big gap developing between him and Yamaha's van Beveren and the struggling Sam Sunderland.

The Briton lost 22m59s during the stage and dropped from second to seventh, 21m06s off the lead.

UPDATE: Van Beveren was awarded around 11 minutes by the organisers for stopping to help the stricken Santolino. That promotes the Yamaha man to fifth overall, 9m32s down on Quintanilla.

Cavigliasso extends lead to over an hour

Nicolas Cavigliasso won his fifth stage out of six, his gap of 17m19s his biggest winning margin yet.

Behind Cavigliasso, Jeremias Gonzalez took second for the third time in a row, but now sits 1h06m49s adrift.