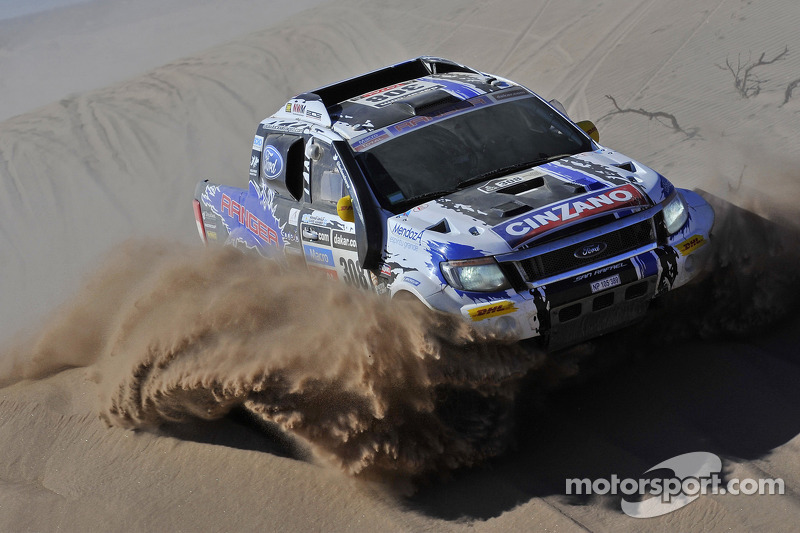 Alvarez and Ranger storm the sand.

ANTOFAGASTA, CHILE, 15 January 2014 – Lucio Alvarez and Ronnie Graue powered their Ford Ranger to ninth place in today’s 10th stage of the Dakar Rally from Iquique to Antofagasta in Chile.

The Team Ford Racing duo were as high as fifth this morning as the test twisted and turned through their favoured sand dunes near the Pacific Ocean coastline. It provided the perfect antidote to yesterday’s frustrations when they became bogged down in thick sand for 40 minutes just 20km from the finish.

That time loss meant Alvarez started well down the running order from Iquique this morning. However, the Argentine swiftly passed a string of stranded cars and trucks during 75km of sand, from which he emerged fifth fastest. 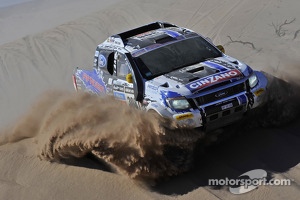 He completed the opening 231km section of the two-part stage in eighth and lost just one place in the following 215km section, which ended with a dramatic downhill sweep from more dunes into the finish at Antofagasta.

They were 43min 01sec behind stage winners Nasser Al-Attiyah and Lucas Cruz and climbed from 35th to 28th in the overall standings. Alvarez suffered an intermittent electrical issue related to the throttle which forced him to briefly turn the engine on and off several times during the stage. However, the time loss was minimal and did not affect his position.

Lucio Alvarez (308):
“It was a difficult beginning to the stage through the sand dunes but we handled it well and did a good job. We made good driving lines through the sand and found all the navigation points without any problems.

“We passed a lot of cars who started ahead of us but it wasn’t hard getting by because they were all stuck. I don’t think I passed a moving car all day, but I went by many drivers who were trying to dig their cars out of the sand. I only had to pass motorcycles and quads and that’s easier than trying to overtake cars.

“Tomorrow is a massive test. I believe we can stay inside the top 10 again and that would be ideal. One advantage we have is our start position of ninth, which is the reward of a good stage today. In the dunes the early starters follow a straighter and more direct line and it’s possible to go faster by following the same line.”

Scott Abraham (Team Manager – South Racing):
“Lucio made a great start to the day, especially considering he was 31st on the road and behind seven trucks. He’s strong in the dunes and he had a good run through the sand this morning. He was fifth after that section and eighth at the end of the opening part of the stage.

“He pretty much held position throughout the second part and brought the Ranger home in good condition, which was important with tomorrow in mind.

“He will start ninth on the road for 622km of non-stop rallying and that will help him. It will be a big test and could have a nasty sting in the tail. There are 130km of dunes in the middle and they are virgin dunes for everybody, so there could be big changes and reshuffles throughout the field.”

Tomorrow’s action:
The toughest stage of the rally awaits competitors on Thursday. After restarting from Antofagasta, drivers cover a 144km liaison before plunging into a 605km marathon competitive section through the heart of the Atacama Desert to finish at the El Salvador bivouac. It begins with 350km of mine tracks and river crossings, before diving into the famous dunes of Copiapo. The survivors will emerge 120km later for the final 130km of dirt roads into El Salvador.