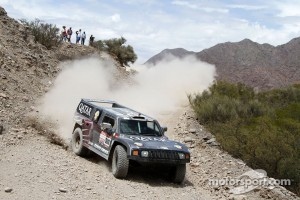 Copiapo, Chile (January 7, 2012)- Another history making day for Team SPEED and the Robby Gordon Motorsports HUMMERs as Nasser Al-Attiyah wins Stage 7, his 2nd in the 2012 Rally, and teammate Robby Gordon coming in 2nd place, 7 minutes and 30 seconds behind. It's the first time RGM built cars finish 1st and 2nd on the podium during a Dakar Rally.

Robby Gordon struggled early in the stage with a flat tire that cost him 5 minutes off the start. "Driver error got us off course a little and we hit a rock." Gordon commented about his slow start. "We had a really strong run after the change and pushed to the end. It's a really good feeling having Nasser win again in our car; it shows that we have cars that can compete. I never had a doubt in my mind about our team, it's just a matter of good luck vs. bad luck." With Gordon coming in 2nd he feels he needs to push a little more heading into the second half of the Rally after rest day. "Being 13 minutes behind the overall leader is a bit more than where we want to be at this point in the rally. My guys will go to work on rest day and rebuild the car giving it a new transmission, cv's, hubs and rotors; basically full service from front to rear. We're ready to gain even more time and with Nasser catching up each day it's going to be a good race." Gordon now sits in 3rd place - 13 minutes and 9 seconds behind the leader Peterhansel.

Al-Attiyah's day got better as he went further into the 477km stage in the dunes of Copiapo. As usual he came on strong and pushed really hard at the end to gain a huge time advantage on the field. "It is my job as a driver to do the best I can and Lucas and I will do our very best from here to the end to finish strong." says the Qatari driver who still sits in 6th place over all, nearly 43 minutes behind.

It's been an eventful Rally thus far for the Team SPEED HUMMERs. Robby Gordon has been quite consistent, finishing in the top 5 - 5 out of the 6 stages that have been completed. Consistency is what wins the Dakar Rally. As the team prepares the cars for the journey into the Atacama Desert of Chile, then on to the new territory of Peru, they will rest their heads with one thing on their mind - an overall win on January 15th.

Reflection of the first part of the Dakar 2012 event