Looking back at a particularly gruelling 2018 edition of the Dakar Rally, we narrow down our list of standout competitors across the marathon's various classes to a top 10.

For the first time in some years, Yamaha was a proper threat to established super-teams of Honda and KTM, and much of that was down to the prowess of van Beveren.

In only his third Dakar appearance, the 27-year-old Frenchman – a serial champion in the Le Touquet enduro – spearheaded the Yamaha charge, grabbing the outright lead on Stage 4 and remaining in command into the second week.

It was a cruel twist of fate that the stage that sealed Walkner’s triumph, the Salta-Belen test, was the one where van Beveren came unstuck, as he broke his collarbone and a rib in a crash that forced him out of the running.

If he comes back in years to come, he’s a surefire contender to stand on the top step of the podium. 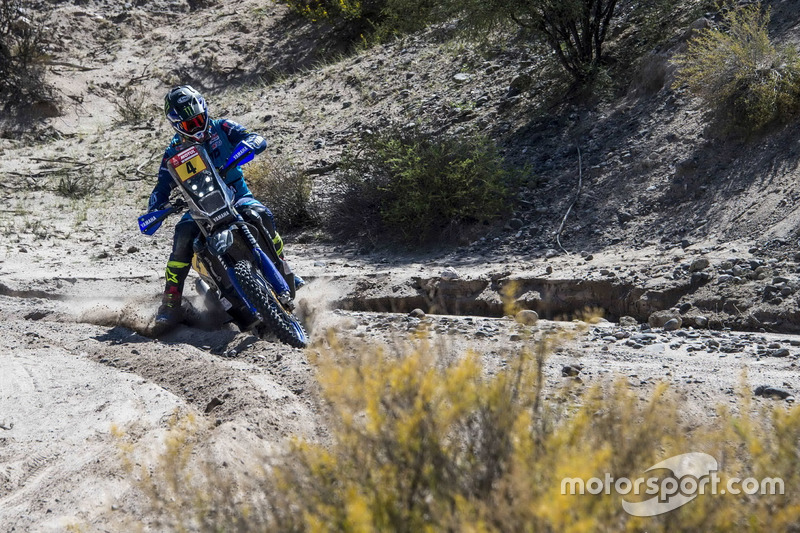 Brought into the factory Toyota Gazoo Racing team and paired with experienced co-driver Michel Perin (who prior worked with Mikko Hirvonen at X-raid Mini), ten Brinke stepped up his game accordingly and performed at a thoroughly high level in the 2018 Dakar.

A driver with a best Dakar finish of seventh, he appeared on the whole no less rapid than his more heralded teammates Nasser Al-Attiyah and Giniel de Villiers, and grew into a genuine frontrunner towards the end.

He topped his first proper-length Dakar stage – having previously won the 11km opener in 2016 – and was on course for an overall podium before a penultimate day engine failure.

It was a cruel end to an impressive showing that should mark ten Brinke as Dakar's likeliest next first-time winner. 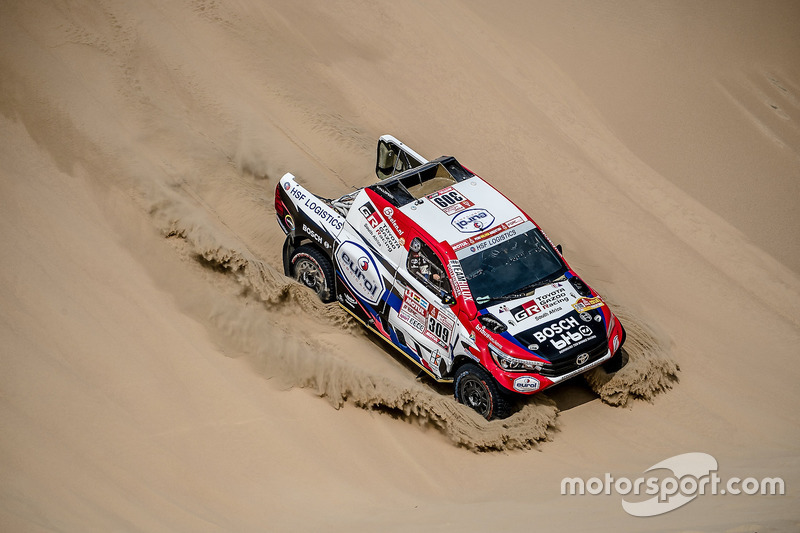 Should the 2018 race prove not only Peugeot's Dakar swansong but also Peterhansel's, it would not be a terribly appropriate end to the 13-time champion's cross-country career.

In a marathon of fewer pitfalls and accidents, you would've probably bet on Peterhansel to get the job done and wrap up a third straight win. And initially it seemed like the sheer challenge of the 2018 route was only playing into his hands.

He looked to have one hand on the trophy after Peru, but tore up his Peugeot's suspension right after the rest day – and then damaged the steering in a shunt on the penultimate stage to drop outside of the top three.

Uncharacteristic incidents aside, he's still obviously quick enough to consistently run at the sharp end and to score a 14th win down the line - provided he can find the motivation to search for another, almost certainly less prestigious programme post-Peugeot. 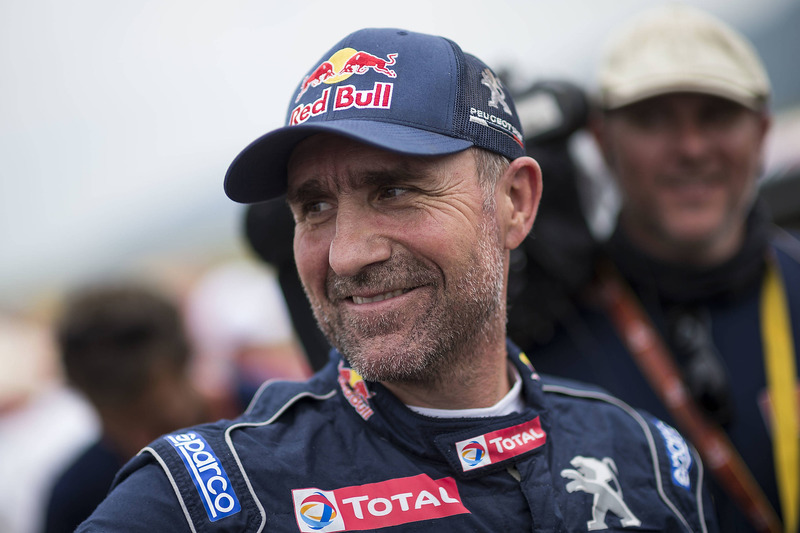 The truck class contest within the 2018 Dakar was very nearly, to borrow a football cliché, a game of two halves.

Defending champion Nikolaev was super rapid out of the blocks, eking out his lead with every day through the Peruvian dunes, as almost all other favourites – including all his Kamaz teammates – suffered.

But Iveco's Villagra at least kept the gap respectable, and when various parts on Nikolaev's truck began to fail in the stages after the rest day, the Argentine was there to capitalise and make it a proper fight.

Split by a single second with two stages left to run, either would've been a deserving winner – but a gearbox failure for Villagra made for a galling anticlimax. 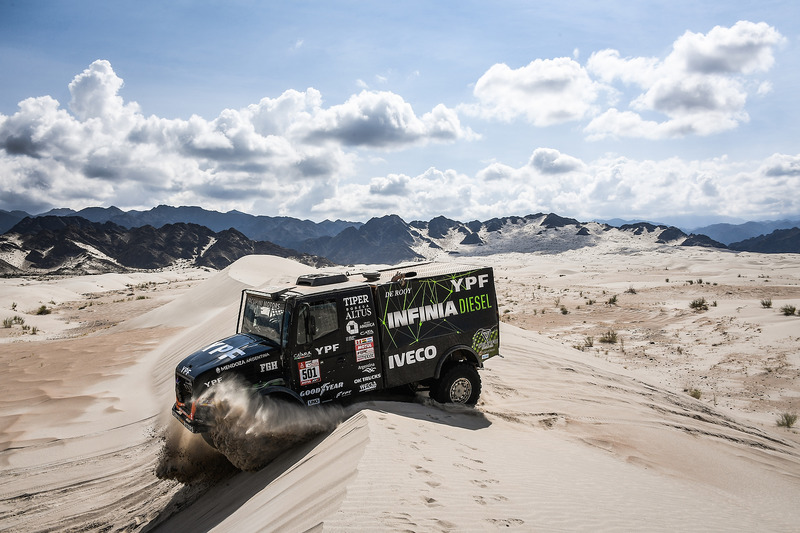 High-altitude running was Toyota's Achilles' heel in the previous duels with Peugeot, but in 2018 it was Peru's sea-level dunes that hobbled the team's challenge instead – with Al-Attiyah in particular feeling hard done by by a rule that barred his 4x4 car from having an on-board tyre inflation system.

Time lost to tyre punctures and getting stuck in the sand in the opening week proved insurmountable for the Qatari, but the rest of the marathon was largely positive – and Al-Attiyah wound up closer behind Sainz in the end than he had been at rest day.

So that should be encouraging, and ditto for the class-high five stage wins. The Qatari won't get the satisfaction of toppling the high-spending dominant rival team after all – but in the post-Peugeot era, it's hard to look past him as far as the likely new benchmark is concerned. 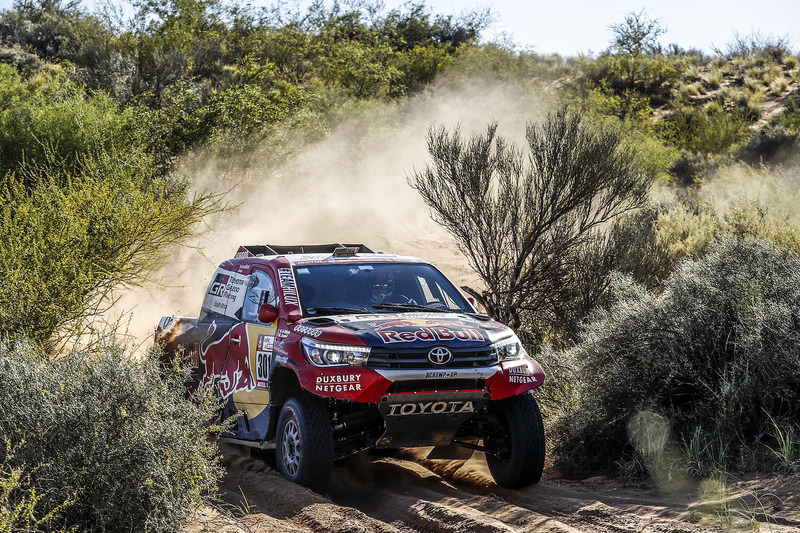 An early injury for main rival Sergey Karyakin robbed the quad category of what could've been a scintillating two-week-long duel, but should not detract from Casale's imperious performance.

The only competitor across all categories to lead from start to finish, Casale broke away early on with three consecutive stage wins - and continued to keep up headline pace even when it became obvious nobody else in the pack could seriously threaten his lead.

Of the 12 competitive stages held in the quad class, he topped five and placed in the top three in six more.

Karyakin's initial challenge and the performance of star rookie runner-up Nicolas Cavigliasso suggests he probably won't have it this easy in future editions, but Casale should have a strong chance of establishing himself as the most successful rider ever in what is still a relatively new Dakar category. 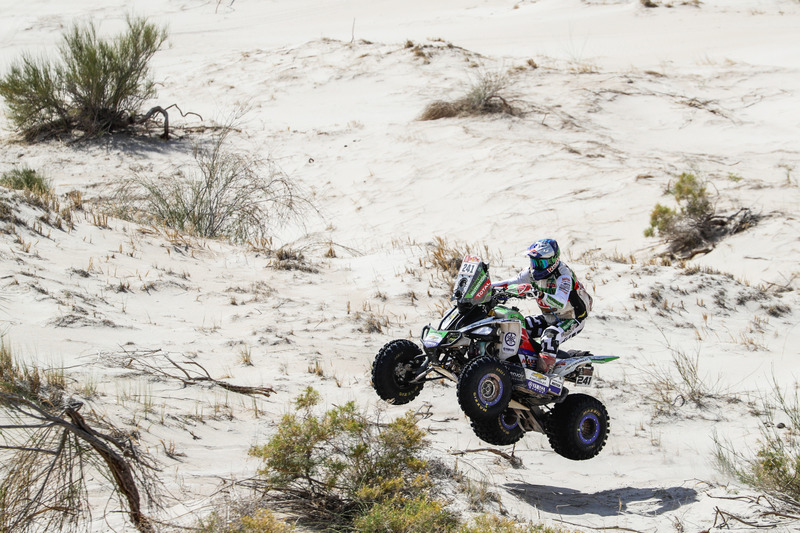 It’s astonishing to think that Barreda has 21 stage wins in the Dakar to his name – only three shy of Marc Coma – and yet he has not been on the outright podium.

This time, it wasn’t a navigational error or a mechanical problem that put paid to the Spaniard’s chances, but instead a crash on Stage 7 that left him with pain in his knee.

He soldiered on for another three stages, but it was clear his pace was not what it was before the accident. And after dropping 39 minutes to Walkner on the decisive 10th stage, it made sense for him to call time on his ambitions for another year. 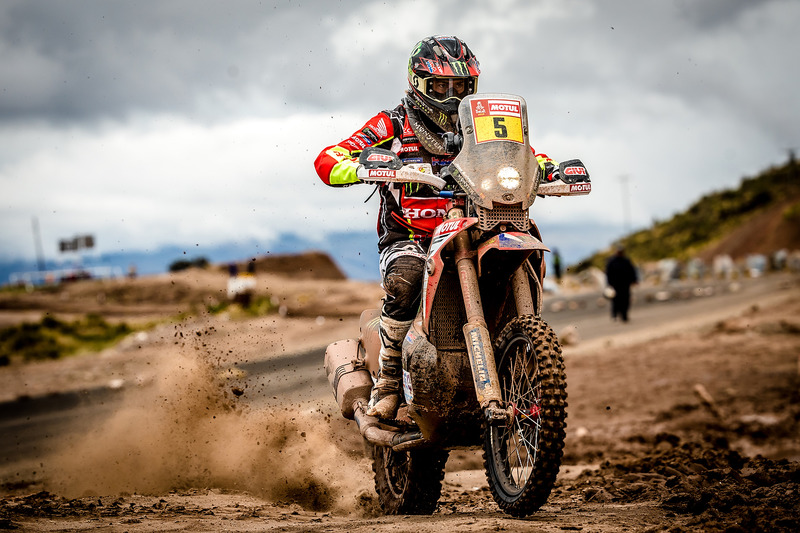 Walkner may only have won just the one stage, but it was the one that really mattered. After the end of the Salta-Belen test, it was clear that the rally was his to lose.

From there, the Austrian nursed his 39-minute advantage to the finish, duly securing an incredible 17th consecutive bikes class victory for KTM.

It certainly wasn’t a triumph built on sheer speed. Besides Stage 10, where Walkner was one of only two frontrunners to avoid getting lost, his best stage finish was (a distant) second on Stage 5 and two third places.

But he was there at the end when it really mattered – at the finish line. And nobody would really argue his success wasn’t thoroughly deserved for one of the Dakar’s top two-wheeled performers of the last four years. 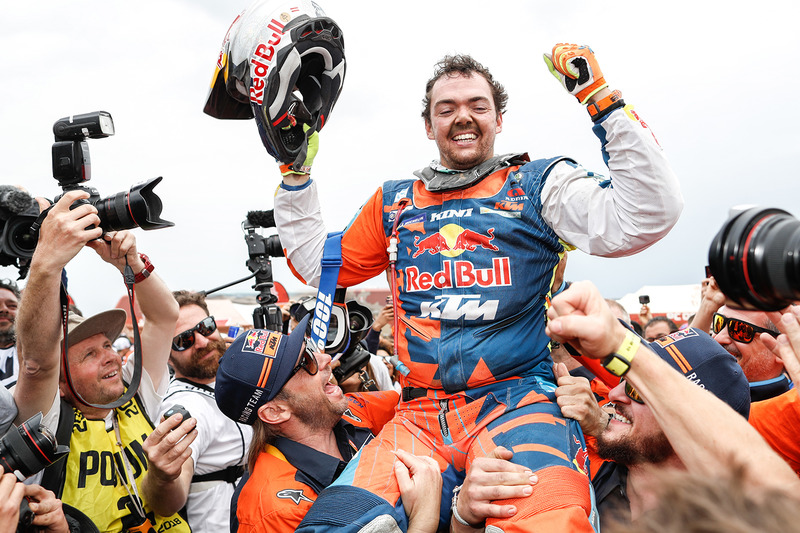 Sainz very aptly described the 2018 Dakar as a race of “survival” - and it was the fact he proved considerably better at survival than every single one of his rivals that made his win possible.

The Spaniard was on five consecutive retirements heading into this year's marathon, and his most recent exit in 2017 will have been particularly bruising. He was out early then, in a seriously frightening accident, while his Peugeot teammates went on to lock out the podium.

This time, the other Peugeots had all won a stage before he did. Yet so tough was the 2018 route – especially the opening stages in Peru - that the race was never going to be decided by time gained, but rather by time lost.

And Sainz? He lost precious little of it, turning the final few stages into a borderline procession as a consequence. 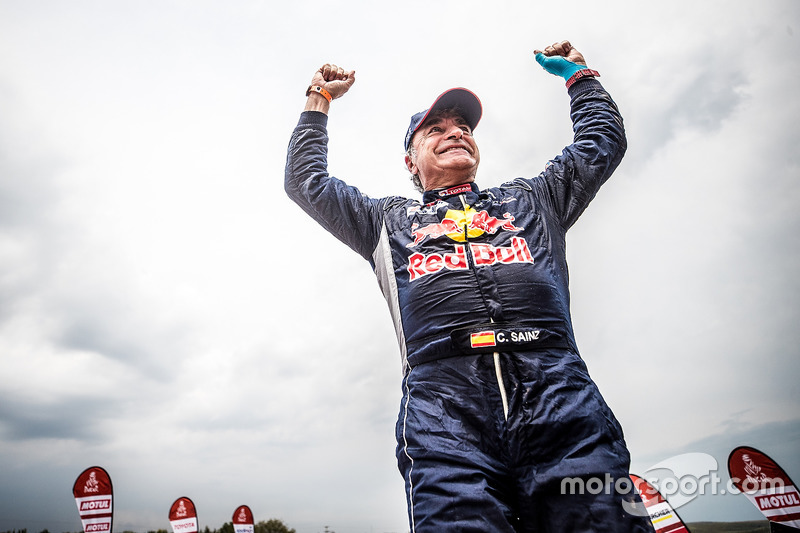 Although Barreda was by far Honda’s most experienced and decorated works rider for this Dakar following the last-minute withdrawal of Paulo Goncalves, it was clear from the outset the lesser-heralded Benavides was going to be an equally potent threat.

Having been forced to skip last year’s rally due to injury, Benavides was tackling the Dakar for only the second time – but you wouldn’t have known it from the way the Argentine set about the task in the opening week.

He took the overall lead on Stage 6, albeit losing it to van Beveren next time out, and took more top-two stage finishes (five) than any other rider – even team leader Barreda.

Only one of those top-two finishes was a stage win, which came on the very last day of the rally as he sealed the runner-up spot, just 16 minutes behind Walkner. Had he not given away 45 minutes on Stage 10, he’d have been ahead by a distance. 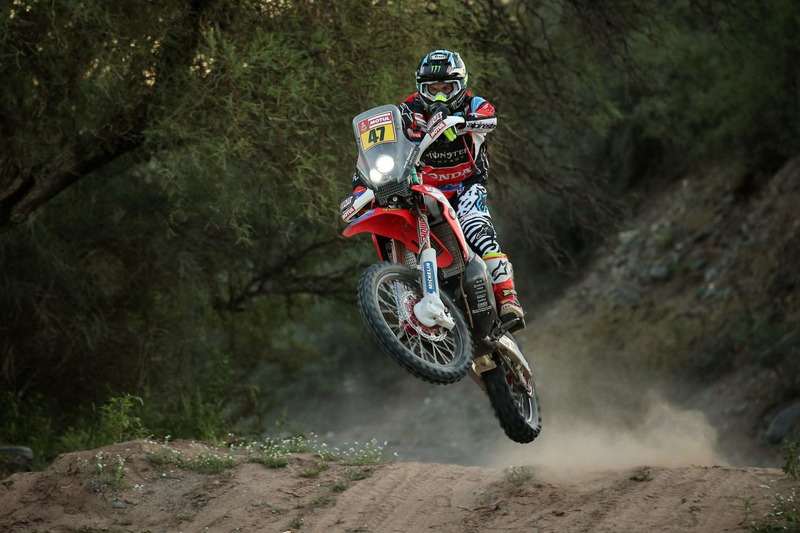