Giniel has effortless run to finish 4th In the day's standings 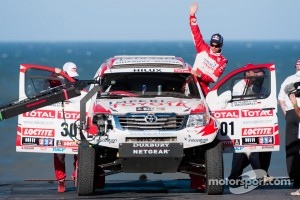 The punishment and achievements of day one on the 2012 Dakar is overshadowed by the death of motorcyclist number 175, who fell 55km into the first short stage. Medical officials, who got to the scene of the accident within five minutes, were unable to resuscitate the Argentine national.

As for the Imperial Toyota team, Giniel had a effortless run to finish in fourth place, just six seconds behind Stephan Peter Hansel, the pre-race favourite. Duncan took it easy, cautiously finding his feet in the dunes and finished in 19th place. The Overdrive cars of Alvarez and Terranova finished 9th and 11th respectively. Two SA Toyota Hiluxes in the top ten and four in the top twenty is a encouraging outcome for the team.

Tomorrow's stage is fast on hard ground and almost 300kms long, which will provide a tougher challenge for the team.

None of the cars experienced any serious problems and Glyn Hall, Hallspeed team principal, is very happy with the team's progress at this early stage.

It is early days and the only thing that can be said with any certainty is that the Imperial Toyotas are capable of running with the leaders and ran without any problems.

Tomorrow, the picture will, yet again, become a bit clearer.

Formula 3 to be celebrated at Cadwell Park