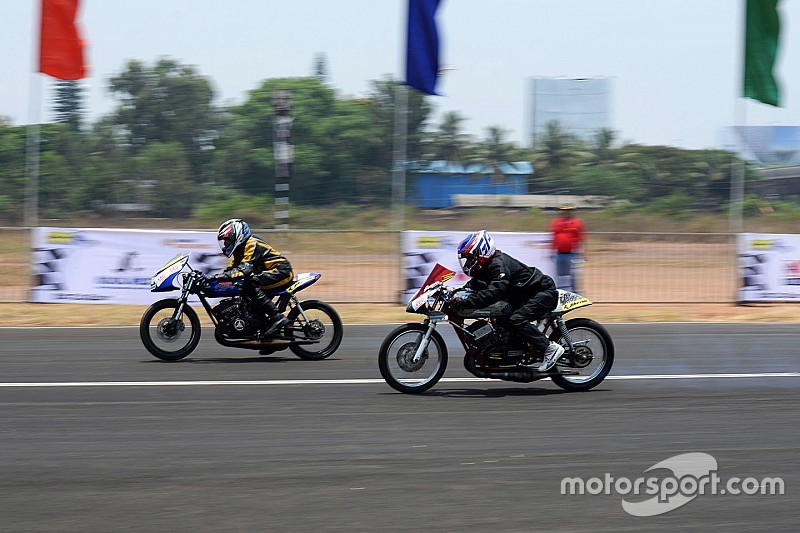 Mohammed Riyaz and Joel Joseph emerged as winners in the Super Bikes and Super Cars categories respectively in the 2017 JK Tyre Vroom.

In the Super Bikes category, Hyderabad’s Riyaz clinched the top spot with a time of 9.897s in his Yamaha RD7. His reaction time was a mere 0.507s, giving him the edge over his rivals.

“I have come straight from a good stint in Hosur and was feeling good,” Riyaz said. “I was confident of a good outing and right from the start of the race, I knew that I was on a roll.

“I know my bike very well and I had full faith in myself. I really enjoyed myself,” he added.

Riyaz, however, came short of a win in the 851-1051cc class, where seasoned racer Rizwan Khan emerged triumphant, completing the quarter-mile straight in 9.677s.

Meanwhile, Joseph won the the Four-wheel Unrestricted class with a time of 12.763s. The home favourite, who was driving a heavily modified Honda City, also reigned supreme in the Indian Open class, lowering his time to 12.673s.

“I am very satisfied with both my runs today. Coming to the event as a defending champion gave me that confidence and I always knew I had a great chance,” he said.

“During the scrutiny, I was asked to change my gear, he said. “So, I wasn’t really comfortable and things didn’t go as expected. I managed good timings despite that and won a few events.”

To encourage female participation, there was a separate class for ladies, won by Goa’s Neha Masurkar.