Tony Schumacher wants to win at Atlanta in the worst way 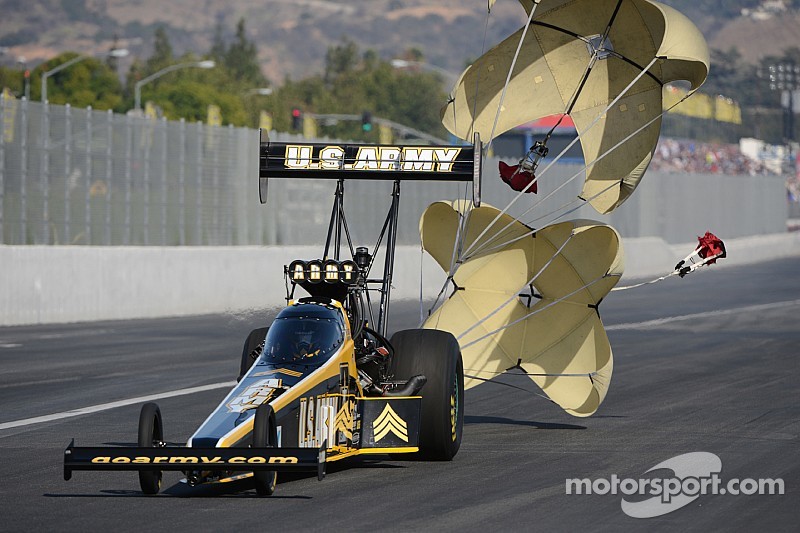 Last track needed to win on to complete his resume.

COMMERCE, Ga. — With an incredible resume that includes 78 Top Fuel wins and a class-best eight world championships, Tony Schumacher knows he doesn’t need to change anything about his approach heading to Atlanta Dragway.

That championship pedigree, which includes the 2014 Top Fuel series crown, has led to victories at every NHRA Mello Yello Drag Racing Series track on the circuit except for one: Atlanta Dragway.

But Schumacher insists nothing in his approach will change heading to this weekend’s 35th annual Summit Racing Equipment NHRA Southern Nationals. With his 10,000-horsepower U.S. Army dragster running as well as it ever has, that may be Schumacher’s best bet for getting into the win column for the first time at Georgia’s House of Speed.

“We’ve got a great car, best car we’ve had for Atlanta,” Schumacher said. “We’ve been in the finals there before and just haven’t won. In all reality, we’ve got a great racecar and a great race team. We’ll just go out and do our job. When I’m strapped into the U.S. Army car and the light comes on, the only thing I’m going to be worried about is hitting the gas and getting down the racetrack.”

Spencer Massey (Top Fuel), Robert Hight (Funny Car), Jeg Coughlin (Pro Stock) and Eddie Krawiec (Pro Stock Motorcycle) were last year’s winners of the event that will once again be televised on ESPN2. The Summit Racing Equipment NHRA Southern Nationals marks the seventh of 24 events during the 2015 season and it’s already been a banner year for Schumacher, who appears even more motivated following his latest championship.

He posted a victory in Phoenix and has advanced to three final rounds, putting him in a familiar position as the series points leader. To his credit, Schumacher has also never let the lack of success at Atlanta affect his mindset, which is why he’ll be confident and prepared once again heading to the event this year.

“I don’t go up there and say, ‘Why don’t we win here?’ just like I don’t go to Indy and say how come we always win here,” said Schumacher, who has four runner-up finishes in Atlanta. “I’m not surprised, but I continue to be blown away by the fact that we’ve won 78 races. For whatever it’s worth, we tested a brand new car last week. After winning championships and getting off the start we have, we’re not settling. We’re bringing out a brand new car for Atlanta. The guys love it and (crew chief) Mike Green loves it.”

A new car and a forward-thinking mindset have always kept Green, Schumacher and the rest of the U.S. Army team at the front of the pack in the loaded Top Fuel class. That approach is needed more than ever in a class that is as diverse as it has ever been.

Six different drivers have won through the first six events in 2015, a sign of just how deep and talented the class continues to get. Massey claimed his first victory at Atlanta Dragway last season when he defeated Doug Kalitta, in the final round. Both have wins this year, as does Richie Crampton, Antron Brown, who has three Atlanta wins, and 2013 world champion Shawn Langdon.

“It’s a great class this year,” Schumacher said. “It’s a strong state of affairs to see where Top Fuel is right now. The cars are battling each and every session. If I was paying money to see what’s going on, that’s certainly what I would want to see.”

But if Schumacher continues to perform on his championship level everyone will continue to chase him. That bull’s-eye has grown bigger and bigger through the years, but Schumacher welcomes that challenge more than ever. He has been impressed with how the season has started and with the potential of the new dragster, the best may be yet to come, which also bodes well for a breakthrough in Atlanta.

“I think they are coming together better than we expected,” Schumacher said. “Our car is stronger and quicker than in years past. The light at the end of the tunnel looks really good for us. The guys know we have started out strong. We’re just going to show up at the starting line each time and continue to look for moments of greatness.

“We’ve got a great running car but when people line up against us they do better than they do against anybody else. It’s a form of respect, I guess. They know they have to run well to beat us and we typically see everyone’s best shot. That’s been no different this year and it’s not changed one bit whether we’re defending champs or not.”

In Pro Stock, Greg Anderson, who posted a win in Gainesville this year, leads all active drivers with five victories at Atlanta Dragway, falling to Jeg Coughlin in the final a year ago. He will face off against a host of challengers, including Allen Johnson and Larry Morgan, who are the two active Pro Stock drivers other than Anderson to win at Atlanta Dragway, defending world champ Erica Enders, who has won two national events in a row, Drew Skillman, Shane Gray, Jonathan Gray, Vincent Nobile and V Gaines.

As always, fans will have the opportunity to interact with their favorite drivers as they’re granted an exclusive pit pass to the most powerful and sensory-filled motorsports attraction on the planet. This unique opportunity in motorsports gives fans direct access to the teams, allowing them to see firsthand the highly-skilled mechanics service their hot rods between rounds, and enjoy some cherished face time and get autographs from their favorite NHRA drivers.

To purchase general-admission or reserved seats, log on to www.NHRA.com/tickets or call (800) 884-NHRA (6472). Children 12 and younger are free. For more information about the NHRA visit www.NHRA.com.

L.A.-area street-legal drag racing may not die with Irwindale track