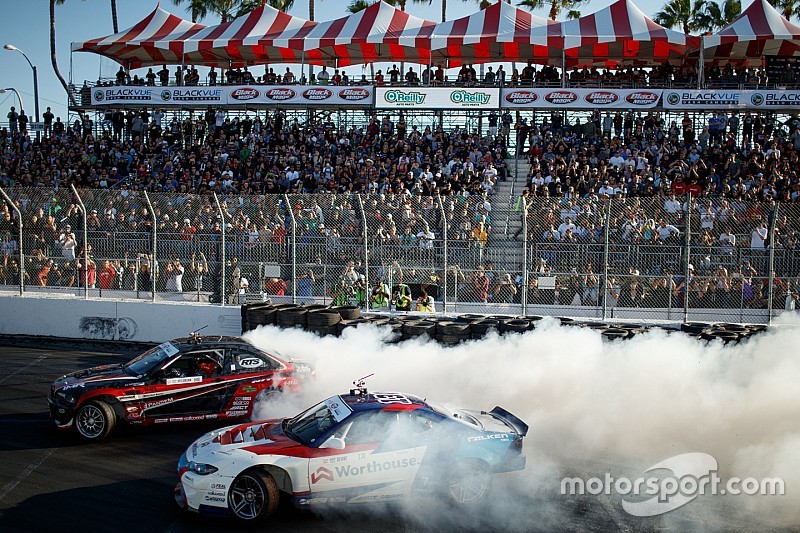 Formula DRIFT's season-opener at Long Beach saw James Deane once more become the yardstick by which all FD competitors are judged. Anne Proffit was there.

The Formula DRIFT community knew he was coming back. And they knew he was good. You don’t win six drift championships being mediocre. What they didn’t know was that James Deane would begin his return to the series with a second-place seed and a win. You just don’t walk in and do stuff like that, particularly in the very challenging Streets of Long Beach season opener.

After all, there were reigning and returning champions to be defeated, former race winners to be vanquished and stalwart contenders to be contained on a warm, sunny day in Long Beach with crowded stands eager and ready for the start of Formula DRIFT’s 14th season.

Drifting isn’t a traditional race; rather, it’s a judged competition where two drivers use their massively powered cars to drift through turns in an acknowledged cadence. They’re judged on their efforts at attempting to harness horsepower –normally between 800 and 1000hp, thanks to boosting – to control their cars. The result is plenty of noise, the smell and sight of burning rubber and two cars trying to lead or chase one another through a sequence of turns. Tire company partnerships are a necessity for anyone competing in this sport.

At Long Beach, Formula DRIFT uses turns 9-11 of the Toyota Grand Prix of Long Beach circuit for competition and the Verizon IndyCar Series paddock for preparation and entertainment. Three judges examine the cars’ progress from atop the Turn 10 grandstand and, if there’s no consensus, the drivers go again for “one more time.”

During Friday qualifying, 2010 champion Vaughn Gittin Jr set the bar with his 97-point score, following two single-car runs by all competitors through the course; he would hold sway over one side of the 32-car ladder in his Ford Mustang. The other side of the ladder belonged to Ireland’s Deane, driving a Nissan S15 (similar to our 240SX). Deane, 25, who entered three races seven years ago, is making a full-season return to the sport, among other drift endeavors. He was one of five unseeded drivers in the field.

Because the traditional field of 32 wasn’t full – there were some no-shows and some DNS – Gittin, Deane, Fredric Aasbo, Alex Heilbronn and Ryan Tuerck all had bye runs in the first round and advanced to the round of 16. Of the bye group, only Gittin would fail to make it past the second round when he overdrove his Mustang, falling to the Viper of Dean Kearney, who spent much of the weekend re-attaching the rear bodywork of his car.

With his exceptionally consistent driving, Deane made easy work of 2013 champ Mike Essa’s BMW M3, then took on reigning and three-time champ Chris Forsberg’s Nissan 370Z. In the semifinals, it was Deane against the Toyota 86 of Ryan Tuerck and finally, the Irishman beat Alex Heilbrunn’s BMW M3. To reach the finals, Peru’s Heilbrunn used his bye to ready for Juha Rintanen’s Nissan S15, then Aasbo’s new Toyota Corolla iM with a “one more time” match-up against Aurimas “Odi” Bakchis’ Nissan 240SX. Bakchis made an error that allowed Heilbrunn, Formula DRIFT’s Pro 2 2015 champ, to advance to the finals.

Some of the more familiar names were missing well before the semifinals. Dai Yoshihara had a difficult time with his Subaru BRZ all weekend and didn’t make it past the round of 32. Local favorite Kyle Mohan’s clutch problems didn’t allow him to race at all. Last year’s winner, Chelsea DeNofa was out after the round of 32; he’s partnered with Gittin Jr. for the season, driving a Ford Mustang. The wheelies he made into T10 were plenty dramatic. Ken Gushi (Toyota 86) and Matt Field (Nissan 240SX), both fan favorites were out early, taking 11th and 12th place respectively.

The race meeting belonged to the exceptionally tall Deane, who showed that his return to US competition would definitely shake up the field. “Each win that I got was mind-blowing,” Deane stated after the podium ceremony. “I had to push hard on every run.” And indeed he did, practicing as hard as he raced in the competition.

In their final round and second pass for the win, Heilbrunn had a smash-up in the final turn. “I made a mistake and came up shallow,” he confessed. “I just messed up.”

“Man, what a way to start back in Formula DRIFT after missing out on the last seven years,” Deane exulted. “I owe a lot to my good friend and teammate Piotr Wiecek, who came up with this whole idea to come back to the series as a two-car team.”

The Worthouse team will keep its US-spec cars in the Huntington Beach area between events. The next Formula DRIFT event, called “Uncharted Territory” takes place at Orlando Speedway April 28-29.