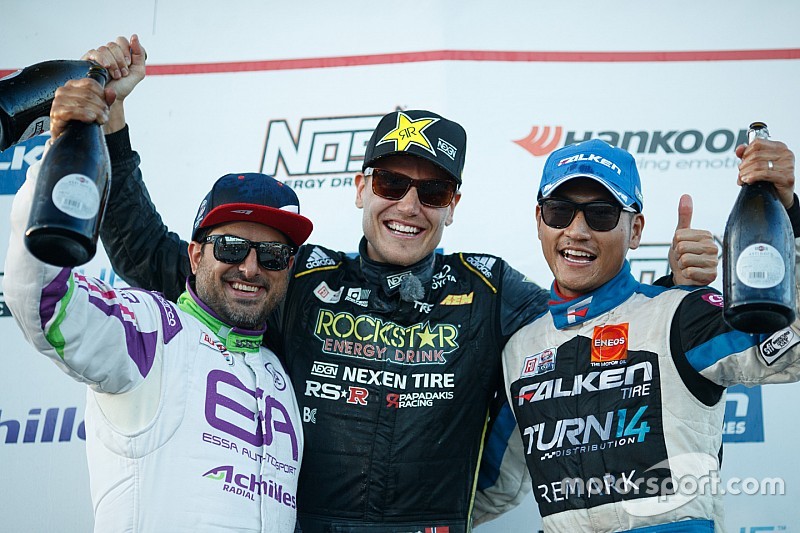 “This season is shaping up to be very entertaining and competitive one,” said Jim Liaw, president and co-founder of Formula DRIFT. “The standings were shaken up after the last round with only 55 points separating the Top 7 drivers.”

Round 2: Unchartered Territory at the Orlando Speed World was an action packed event from start to finish. An estimated 1 million viewers tuned into the Livestream and were treated to a highly competitive event.

The semi-finals became a battle of champions with four past champions competing for the top spot. 2011 Formula DRIFT champion and number one qualifier, Dai Yoshihara in the Falken Tire / Turn 14 Distribution Subaru BRZ faced off against 2013 champion, Michael Essa, in the Achilles Tire / Essa Autosport BMW M3. In a very tight battle, Essa edged Yoshihara to advance to the finals. 2010 champion, Vaughn Gittin, in the Monster Energy / Nitto Tire Ford Mustang RTR went up against 2015 champion, Fredric Aasbo. A very close and technical chase run by Aasbo sealed the win to advance into the finals. In the finals, Aasbo found his groove and managed to take advantage of a small mistake by Essa to secure the victory and move into the top of the 2017 Pro Championship standings.

“What an incredible win! We only built this car over the off season and to get this first win after only the second time out is amazing.” said Fredric Aasbo, winner of Round 2: Unchartered Territory. “Today it all came together especially in that Top 4 battle with Vaughn Gittin Jr. and that was my highlight of the day showing that I can chase really close and getting this first win in the Rockstar Energy Drink / Nexen Tire Toyota Corolla iM is huge.”

The action continues to Round 3: Road to the Championship at Road Atlanta on May 12-13.