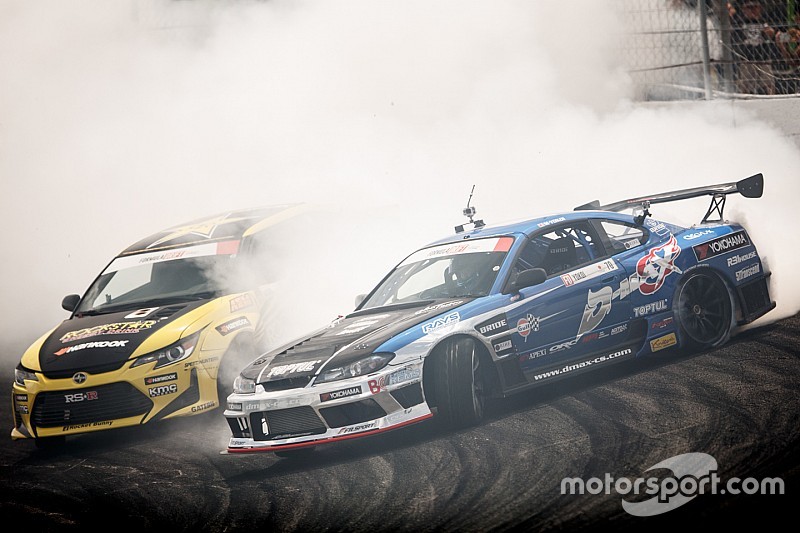 Long Beach, Calif. – Formula DRIFT presented by GoPro returned to Texas Motor Speedway for Round 6: Showdown. Japanese rookie Masashi Yokoi in the D-MAX Nissan S15 earns his first Formula DRIFT victory. The championship will be determined at the Series finale on October 10.

Round 6: Showdown was an action packed event weekend. The new course configuration at Texas Motor Speedway proved to be challenging and highly competitive for the drivers. With only one event remaining in the 2015 season a champion will be crowned at the season finale at Irwindale Speedway.

I wanted to come out and show the Japanese style of driving and really worked hard in the tandem battles,

“Texas has some of the most diehard fans as they braved the heat to see the action through the weekend and were rewarded with intense drifting action,” said Jim Liaw, President of Formula DRIFT. “With only one event remaining, the season will come to climatic conclusion to end a remarkable year.”

Points leader and number one qualifier, Fredric Aasbo lost in the Great 8 opening the chase for the championship up to the rest of the field. Aasbo will head into the championship with a considerable lead of 80 points. The semi-finals had Daigo Saito in the Achilles Radial Nissan GT-R face against his close friend Ken Gushi in the GReddy Performance / Hankook Tire Scion FR-S. Gushi was able to outdrive his opponent on his way to his second podium of the season. Yokoi battled Chris Forsberg in the NOS Energy Drink / Hankook Tire Nissan 370Z. Yokoi beat the former champion to head into the Finals. The Finals were close with the rookie Yokoi being awarded the win by the judges for his first podium and victory in Formula DRIFT. Gushi’s second place finish moves him into second place overall.

“I wanted to come out and show the Japanese style of driving and really worked hard in the tandem battles,” said Masashi Yokoi, winner of Round 6: Showdown. “In the end I wasn’t able to show everything that I wanted, but I’m really happy to get the victory.”

The 2015 Formula DRIFT Pro Championship season will conclude at Round 7: Final Fight at Irwindale Speedway on October 9-10.

Fredric Aasbo at top of the podium in Canada