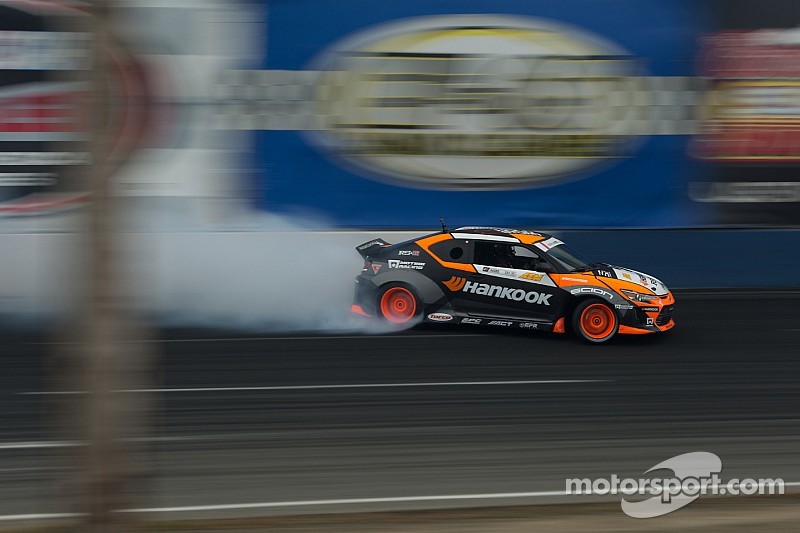 Sets up two-driver battle for championship.

Fredric Aasbo (in photo) in the Hankook Tire / Scion Racing tC took his second victory of the season in Round 6: Showdown held at Texas Motor Speedway , which brought professional drifting to Texas for the second consecutive year. The event featured the Round 2 of the PRO 2 series, Offset Kings car show, and action from the Pro Championship. The weather held up on the main event day providing clear skies and cool temperatures.

“The dramatic finish to this event has set-up a close battle between Fredric Aasbo and Chris Forsberg for the championship as we head into Round 7 at Irwindale Speedway,” says Jim Liaw, President of Formula DRIFT. “The finale has always been an action packed event with drivers leaving it all on the line and we are excited to see how the championship chase unfolds.”

The final four pitted number one qualifier, Forrest Wang in the Get Nuts Lab / Hankook / STR Racing Nissan S14 against Odi Bakchis in the Feal Suspension / Nitto Tire Nissan 240SX. After a One More Time battle, Wang out drove Bakchis to secure his second career podium to finish in third place. Point leader, Chris Forsberg in the Hankook Tire Nissan 370Z faced Hankook Tire teammate, Fredric Aasbo. Forsberg contacted Aasbo on his chase run to give Aasbo the advantage and ultimately the win moving him into the Finals. The Finals pitted Aasbo and Bakchis. In the second run, Bakchis spun out giving Aasbo the event victory. Aasbo closed the point gap heading into the final event of the season with 26 points separating him from Forsberg as they head into the final event of the 2014 season.

“This victory is for my team, for Scion, and for Hankook. This might feel like the weirdest victory ever as people took themselves out, but I’ll take it and will see everyone in Irwindale,” said Fredric Aasbo, winner of Round 6: Showdown. “My Hankook Tire teammate, Chris Forsberg and I have been battling it out all year and we are right where we want to be. We are right behind him and he has all the pressure on him. Irwindale is going to be a killer event.”

The 2014 Formula DRIFT Championship season continues to Round 7: Final Fight at Irwindale Speedway on October 10-11.

Scion closes in on a Formula DRIFT win