Following a year-long hiatus, the FIA Intercontinental Drifting Cup returns this year with the event staged in Europe for the first time in its history and featuring arguably the strongest entry to date. Watch the finals live here.

Thirty-one drivers representing 18 different countries will mark the return of the world’s premier drifting competition, being held for the first time under the stewardship of a new promoter – Russian Drift Series – and taking place at the Bikernieki Sport Complex, also a venue of the FIA World Rallycross Championship, in Riga, Latvia.

The entry is headlined by reigning two-time Cup winner Georgy ‘Gocha’ Chivchyan, who will pilot his familiar Nissan Silvia S15 that took him to his previous two crowns.

As the most decorated driver in FIA IDC history and a three-time RDS GP champion, Gocha will be determined to fend off the challenge of some of the best drivers in the world to retain the cup. However, facing the quality of this year’s entry, the driver from Krasnoyarsk will need to work even harder than in the previous editions to achieve a hattrick of FIA IDC titles.

The list of challengers is headlined by Japanese driver Daigo Saito aboard his Toyota Supra, returning to the cup for the first time since scoring third place in the inaugural competition in Tokyo back in 2017. Making his debut in the competition will be Ireland’s multiple Formula Drift and DriftMasters champion James Deane. Riga is a happy hunting ground for Deane who has won events at the venue multiple times in recent years, including his last year’s DriftMasters triumph.

Other returning FIA IDC competitors include former FIA World Touring Car racer-turned pro drifter, Charles Ng from Hong Kong, along with Russia’s Arkady Tsaregratsev, who finished runner up in 2017. Tsaregratsev should also be a force to be reckoned with, piloting one of the two Chevrolet Corvette-based Flanker F machines, with the second of these cars driven by its creator Sergey Kabargin. 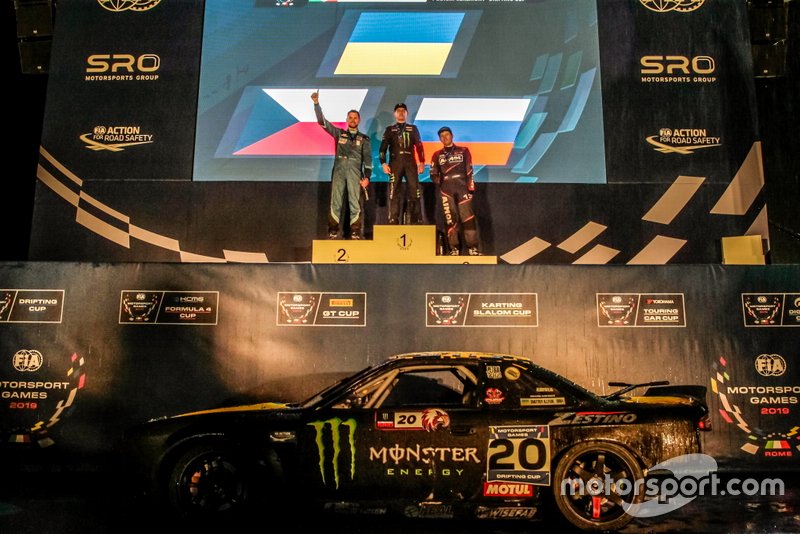 Driving a Nissan 200SX, 2019 FIA Motorsport Games gold medalist Dmitriy Illyuk (above) from Ukraine is another FIA IDC rookie with winning aspirations. FIA Motorsport Games finalist, Michal Reichert from the Czech Republic, is also entered and will be aiming for the top step this time.

New for 2021, a Team Title will also be awarded for the first time, with five teams currently registered to compete. All teams can have squads of either two or three drivers, with just the best two scoring points.

“We are delighted to be able to announce the entry list of this calibre for our first FIA IDC event,” said RDS CEO Dmitry Dobrovolskiy. “It's certainly not an easy task to bring together all these top-quality drivers during this challenging period where travel is restricted and budgets are stretched, and I would like to thank the teams and drivers for the faith they have shown us as we grow this event”.

Launched in 2017, the FIA IDC is the first-ever FIA-regulated drifting competition. The first three editions were held in the spiritual home of the sport – Japan, initially at a non-permanent venue in the Odaiba district of Tokyo, before relocating in 2019 to the renowned Tsukuba Circuit.

The inaugural edition of the FIA IDC was won by Masato Kawabata, with Chivchyan taking back-to-back victories in 2018 and '19.

Following a year-long hiatus, the FIA Intercontinental Drifting Cup returns this year with the event staged in Europe for the first time in its history and featuring arguably the strongest entry to date. Watch the finals live here.