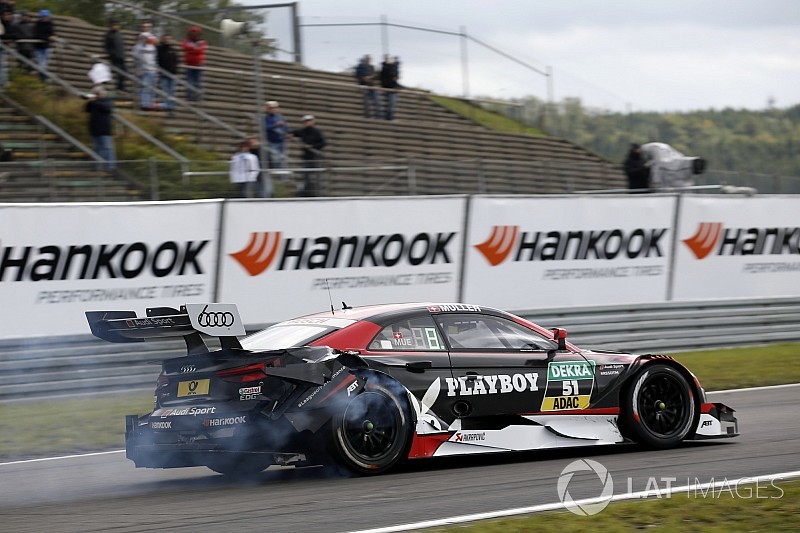 Audi motorsport boss Dieter Gass has shrugged off Timo Glock's claims that it used Nico Muller to block rivals during the Sunday DTM race at the Nurburgring.

Ex-Formula 1 star Glock strongly criticised Audi's tactics following the race, in which the BMW driver crashed into Muller while trying to overtake him.

Glock claimed that Audi keeps "manipulating races" by "sacrificing" some of its drivers to hold up rivals and help the Ingolstadt brand's leading competitors.

However, Gass dismissed the accusations and said Glock should have overtaken Muller "if he was so much faster."

He said: "Muller was in front, Glock crashed into him from behind on a 12-metre wide track. If he was so much faster than him, why not overtake?

"It wasn't Nico's mistake. It was Nico's strategy to stay out long, he drove as fast as he could. I think this is what we could see pretty clearly. Of course, he doesn't want to be overtaken.

"There's not much more to say, really. We fought hard with all cars as tyre wear was heavier than before."

Muller claimed he "braked normally" at the time of the incident, and was confused as to why Glock had hit him.

"I braked normally in order to make the corner," explained Muller. "At the chicane, I closed the door to the inside, I stayed on my line and suddenly we crashed. He crashed into me.

"I don't know what happened, whether he missed his braking point, I don't know.

"I stayed on track for a long time and my tyres were going down. I just wanted to keep my position. It worked pretty well for two, three laps."

BMW motorsport boss Jens Marquardt was clear in blaming Muller for the incident, saying Glock was complaining about him prior to the crash as well.

"Timo complained about the radio that Muller braked extremely early and hard. Manoeuvres like that don't belong here," said Marquardt.

"And at the second time, they crashed. This is something for the stewards to look at, but it wasn't nice."

"Race control issued a lot of reprimands. Maybe it's time to go beyond that and issue a penalty when the stewards deem situations as being too hard.

"Some manoeuvres were not nice and that doesn't need to happen."

Glock believes Audi is under extra pressure as it has had the best car in the past two seasons, but has lost the drivers' title on both occasions.

"This shows how much pressure they have, Dieter Gass has, when he orders such tactics," said Glock.

"They've had the best car for two years but didn't manage to win the title because they made too many mistakes. They have the pressure, it's clear.

"I don't think it makes sense to talk things through with them as they are doing it again and again. The pressure is mounting, as you can see with these tactics.

"It doesn't get more obvious than this. And this is a pity, very much so."

Robert Wickens: “Some teams take their tactics a bit too far”