DTM points leader Mirko Bortolotti says he’s not counting any of the championship leaders out of the title race at the season’s halfway stage ahead of an eight-week summer break.

Grasser Lamborghini driver Bortolotti reclaimed the top spot from Sheldon van der Linde at the Norisring on Sunday after finishing second to Felipe Fraga as his Schubert BMW rival van der Linde finished outside the points in 15th.

Bortolotti now heads the standings by nine points over the South African after notching his fourth podium finish of the season, although he is yet to win a race.

Ahead of the championship’s mid-season hiatus, before action resumes at the Nurburgring on the final weekend of August, Bortolotti explained that he was “really proud we’ve been seven times out of eight races in the points” in a tight season where 13 different drivers have finished on the podium so far.

“It’s such a high level of field that you never know who is going to be the one to beat at the next weekend, which makes GT racing so special,” said the Italian.

“It’s just about maximising what you’ve got day after day, getting the maximum result.

“We worked really well in the first half, but we need to keep this up.

“We have a break now, so we focus on other things and we try to come back strong in the second half of the season.”

Asked by Motorsport.com sister title Motorsport-Total.com who he considered as his closest rival, the Italian responded: “Everybody still.

“It’s half-distance only, so it’s good to have had a good first-half of the season, to be consistent in the points, that pleases me a lot.

“I’m proud of the work we’ve done all together to this point and it’s still half a season to go, so it’s way too early to talk about any congratulations or a championship.” 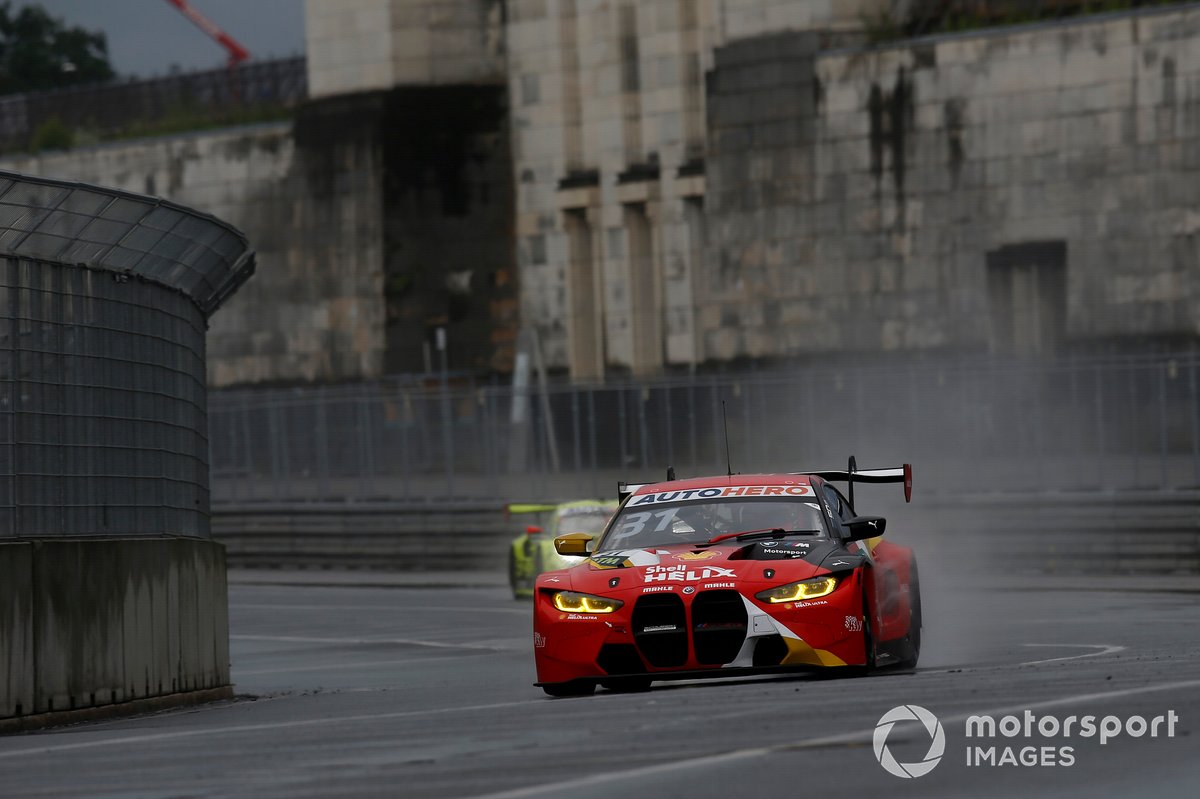 Speaking to Autosport after his second non-score of the weekend, having been eliminated from race one in a pileup at the first corner, van der Linde said that “my expectations were not particularly high for this weekend anyway”.

However, he stressed that “all the cards are still on the table” after the summer break with a run of tracks coming up that he believes will be favourable to the new M4 GT4.

“We’re still second in the championship, we have Spa and Red Bull Ring now which are two really good tracks, so yeah, let’s see,” he said.

First-time DTM winner Fraga said he wasn’t writing off his title chances either, despite a run of five non-finishes “that hurt a lot our championship”.

Stating that he too was “just thinking to go by race-by-race,” the Red Bull Ferrari driver said “I don’t want to even think about the championship” after breaking his win duck.

“I think yeah, there’s always a chance,” the Brazilian replied when asked to assess his title prospects by Motorsport-Total.

“Coming here, I was doing some counts and the leader of the championship was doing an average of 10 points per weekend.

“Basically when Sheldon had a crazy weekend in Lausitzring [winning both races], he was there. It’s not game over, for sure, there’s still a long way to go.

“But I just don’t want to talk too much about it because I started this season strong in terms of pace and I was never even crossing the line.

The GT3-based DTM is a different proposition to the Class 1 era that ended in 2020, but Audi’s top protagonists remain the same. Rivals Rene Rast and Nico Muller have now swapped teams, making their Team Rosberg and Abt engineers uniquely qualified to reveal what makes the pair tick.

David Schumacher says the convivial atmosphere in the DTM has come as a shock this year, having felt he had “no friends” during his time in single-seaters.

Porsche didn’t take long to make its mark on the DTM, with its first victory arriving at the Norisring earlier this month. But few expected that to come courtesy underrated Austrian Thomas Preining and his single-car Bernhard team. Here’s how they did it.

The DTM has turned down calls from drivers to install a set of repeater lights to improve visibility and cut down the chances of startline accidents.