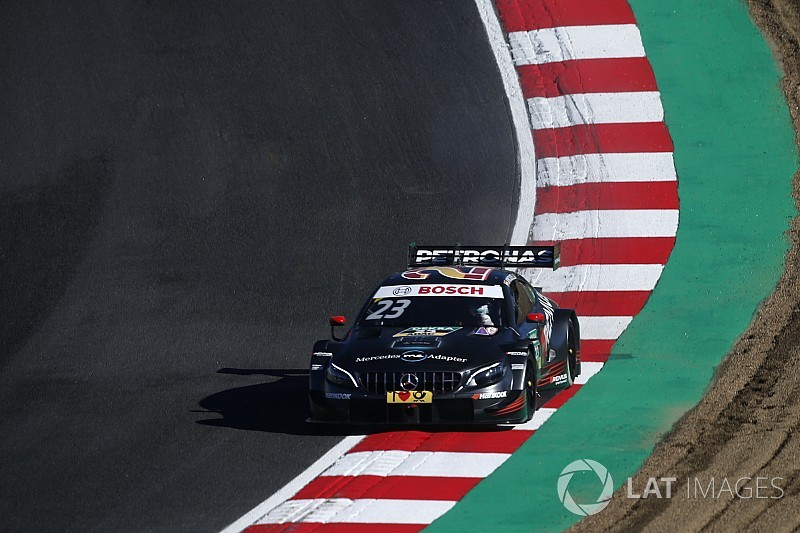 Daniel Juncadella secured pole position for the opening DTM race of the weekend at Brands Hatch, leading an all-Mercedes front row ahead of Lucas Auer.

Juncadella snatched his second pole of the 2018 DTM campaign with a late lap of 1m18.069s around Brands Hatch's Grand Prix layout, enough to edge out stablemate Auer by 0.092s at the end of the 20-minute session.

It had been Auer that held the lead heading into the final five minutes, ahead of BMW's practice pacesetter Augusto Farfus, before Juncadella leapt to the head of the order with less than a minute left on the clock.

Auer improved thereafter but not by enough to beat the Spaniard, while reigning champion Rene Rast's final lap was good enough to put him third, a further tenth behind in the best of the Audis.

Philipp Eng led the BMW charge in fourth, just 0.002s behind Rast, while Farfus slipped to fifth in the closing stages.

Points leader Gary Paffett suffered an off at Paddock Hill in the first part of the session, glancing the barrier, but the Mercedes driver avoided major damage and was able to set the sixth-fastest time when he returned to the track.

Ex-Formula 1 driver Timo Glock spun off at Surtees at the very end of the session, bringing out the yellow flags, but had set a time good enough for seventh.

Rast was the only Audi driver to breach the top 10, with the Ingolstadt marque's next-best placed representative being Robin Frijns in 11th place.

Jamie Green's struggles continued at his home track, the series veteran qualifying on the back row alongside BMW man Bruno Spengler.