Red Bull Formula 1 protege Liam Lawson takes a healthy 14-point lead into the final round at Norisring this weekend, but can he hold off Audi’s Kelvin van der Linde to become the DTM’s first GT3 champion?

When Red Bull announced that it would be returning to the DTM this year, this time with a team of its own, the spotlight was very much on Alex Albon rather than his younger teammate Liam Lawson.

After all, Albon had made a name for himself in F1 over the last two years and his presence was going to boost the stature of a championship that had undergone a major overhaul over the winter.

But while Albon has been impressive in his own right this year, it’s Lawson who has really shone in the other AF Corse Ferrari and is now on the verge of making history in the German championship.

Despite having to adapt to a car unlike anything like he’s driven before, the Kiwi was rapid straight out of the gates in the DTM, becoming the series’ youngest winner when he claimed victory on his debut at Monza.

While Lawson is first to admit that his AF Corse team had a bigger role to play in the success, having delivered a rapid pitstop to allow him to leapfrog his rivals, his pace on the outlap was equally important in completing the undercut.

Over the next seven races, Lawson regularly finished on the podium, but some glaring errors and a fine run of form from Abt Sportsline driver van der Linde meant he wasn’t exactly a title favourite at the middle point of the season.

In fact, after three non scores across the Zolder and the Nurburgring events, Lawson faced a daunting 49-point deficit to van der Linde in the standings as the championship reached its halfway stage.

But then came the turning point of the season, the Red Bull Ring weekend at the beginning of September. On his employer’s home turf, Lawson sensationally won the opening race from pole position, before repeating that result the following day with 25kg of additional weight on his car - a scenario that was deemed impossible when the DTM announced that it would be bringing back success ballast to the series this year. 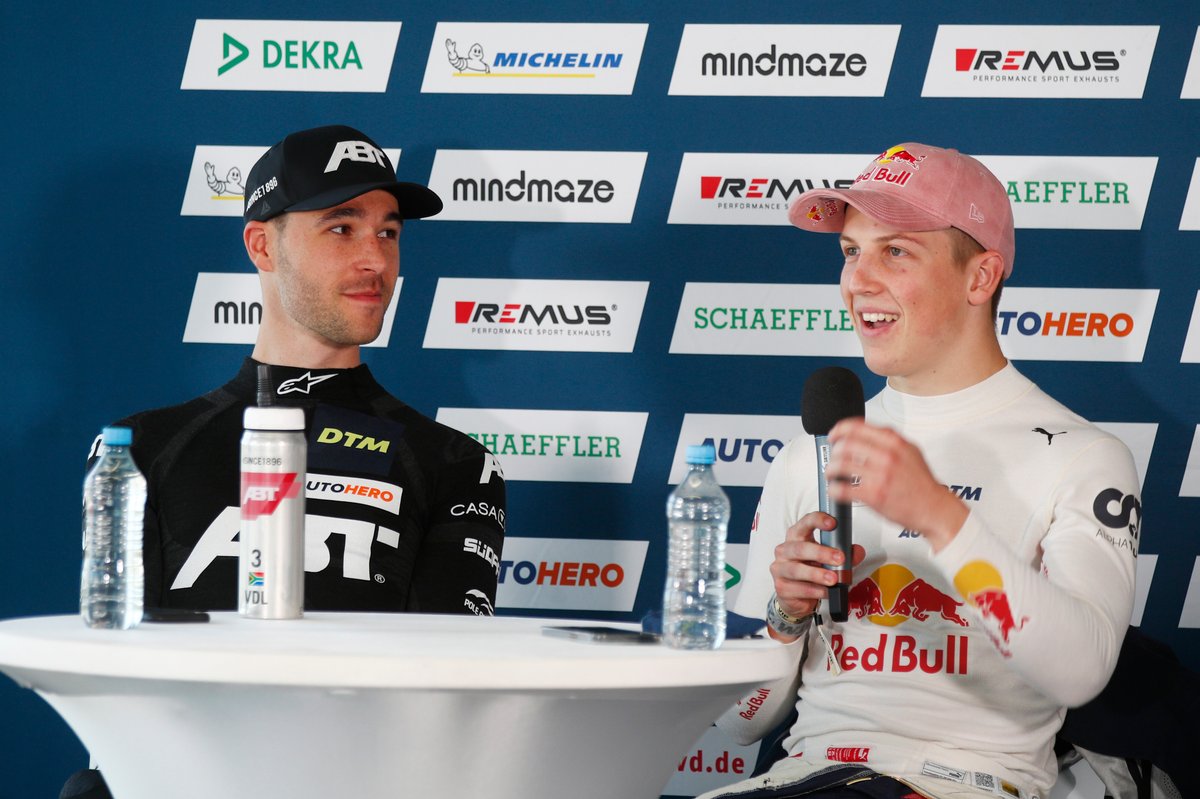 Lawson’s against-the-odds double win coincided with van der Linde enduring his worst weekend of the season, finishing just fifth and sixth across the two races. While the South African had anticipated the Austrian track to be the weakest track of the calendar for Audi, not even he could have imagined a 37-point swing in the championship in a single weekend.

Van der Linde has since bounced back from a difficult run of races and the two drivers are roughly on a more even footing heading into the final round of the season at the Norisring this weekend.

On paper, Lawson does have a substantial 14-point advantage with only 56 points on offer across the two races. However, neither he nor AF Corse has any past experience at the iconic German street circuit, leaving them on the back foot compared to van der Linde and Abt Sportsline.

Of course, it’s not the first time Lawson is having to adapt to a new track, but the bumpy nature of the Norisring provides a unique challenge for both drivers and the teams.

“It's very very short,” he says of the German track. “I've been looking at previous races from the last couple of years, it's really cool. DTM has onboards from Class One cars.

“It looks extremely bumpy, very very tight, obviously. I know the team is working very hard to figure out more or less baseline set-up for a track like this and try and compare it to something they have been on before.

“Obviously simulator work is great but it’s nothing quite compares to the real thing, so it's always going to be a new experience when I get in the car but it looks like a cool track.” 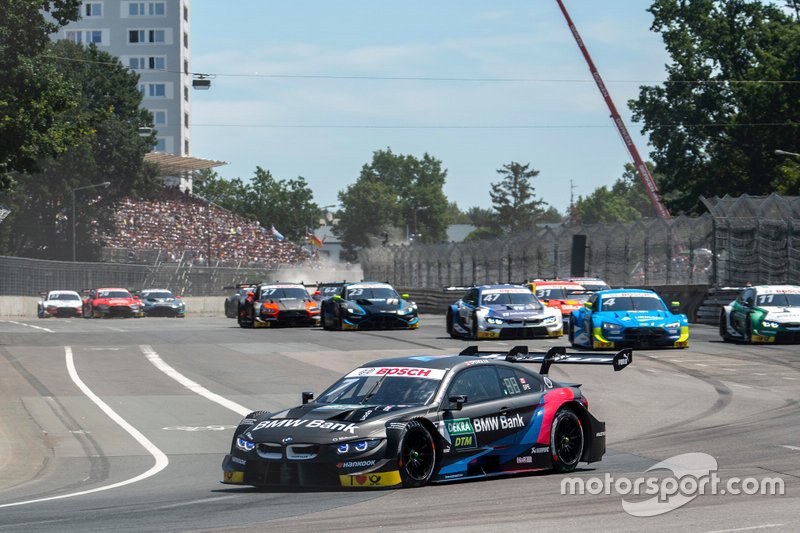 The success ballast, too, could play a role in deciding the outcome of the title, especially as the extra weight hurts acceleration out of slow corners.

Lawson will carry 18kg of additional weight on his Ferrari into the first race of the weekend on Saturday following his second-place finish at Hockenheim last weekend, while van der Linde’s Audi will be completely free of ballast.

This gives the South African a real chance to cut down the gap to his championship rival on Saturday, buoyed by a car he feels will suit the characteristics of the 2.3km circuit.

“Audi is in a fortunate position to have a lot of data from the car [at Norisring],” said van der Linde. “We know how the car reacts to this bumpy style street circuit. We know exactly what we need to do with the set-up. The car suits the track, we are really strong in the brakes, especially in the bumpy braking zones.

“I'm just coming here with an absolutely positive mindset. Absolutely nothing to lose and I think that's the right way to go about it.”

Of course, if van der Linde is able to capitalise on the situation to nab a victory on Saturday, he will have to take a hefty weight penalty going into the final race of the season, turning the tide in favour of Lawson again.

History has shown that the Abt driver hasn’t been able to muster the kind of results his title rival Lawson has managed with extra weight on his car. In fact, van der Linde struggled to even finish on the podium each of the four times he was carrying the full 25kg of ballast on his car.

So unless the factory Audi driver can buck that trend come Sunday, it’s Lawson who is primed to be crowned the first DTM champion in its GT3 era…. 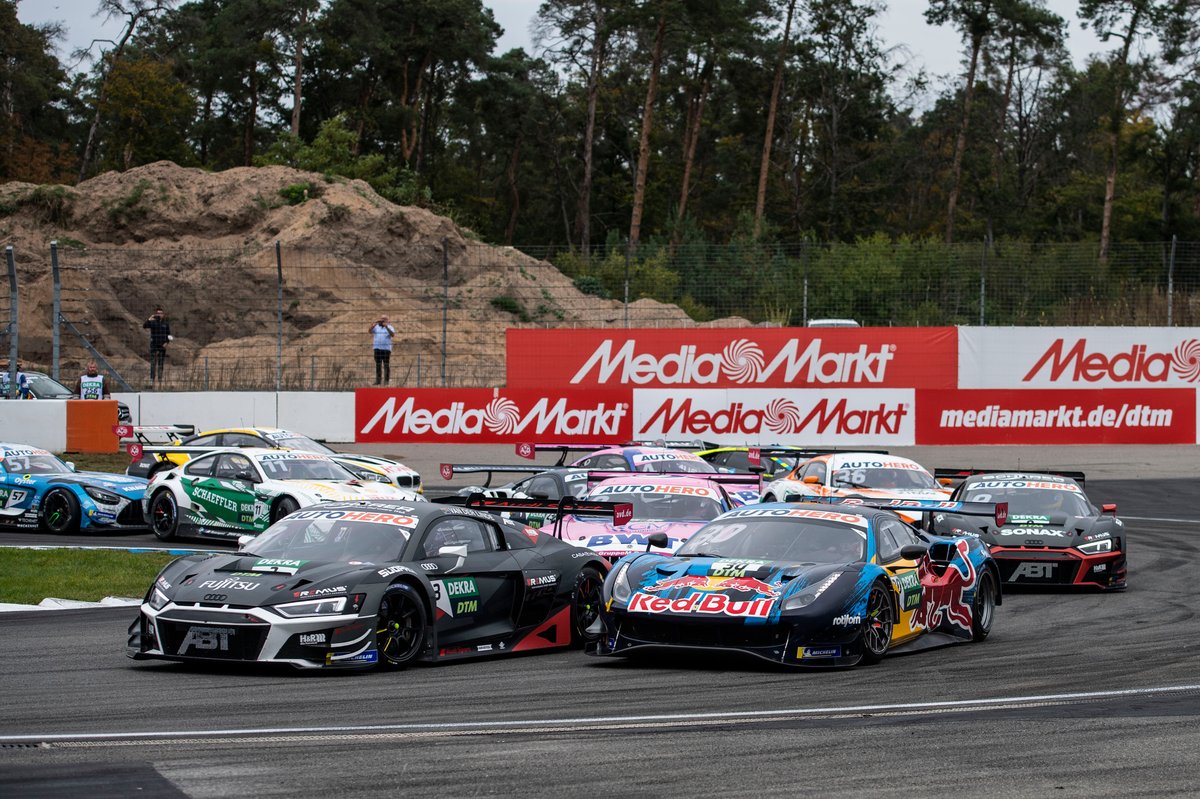 While Lawson and van der Linde are the primary contenders for the title, two other drivers head to Norisring with a mathematical chance of winning the championship.

The first is DTM returnee Maximilian Gotz, who sits 26 points adrift of Lawson in the standings and could very much spring a surprise this weekend. However, having not won a race since the second round at the Lausitzring back in July, the HRT Mercedes driver will need more than just consistency to stage a major upset on his home turf.

Factory BMW driver Marco Wittmann is also in the hunt, but with a 41-point deficit to Lawson his chances of adding a third crown to his CV are rather slim. Had things turned out differently at Hockenheim, where a Balance of Performance change left him struggling down the order, Wittmann might have been in the thick of the title fight heading into this weekend.

Norisring DTM: Start time, how to watch and more