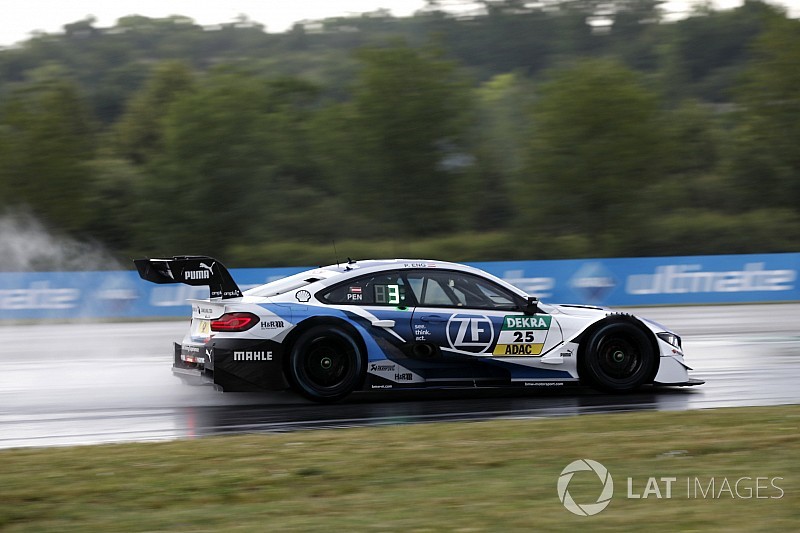 DTM drivers have called for the Hungaroring pitlane to be resurfaced following a chaotic race on Sunday, which featured three separate pitlane incidents.

Drivers had to pit on slick tyres in wet conditions as heavy rain started to fall during the race.

Mercedes driver Lucas Auer was unable to stop at his position and slid into the pit building, before Edoardo Mortara and Bruno Spengler were caught up in similar incidents and the race was subsequently red-flagged.

Seven people, including BMW and Mercedes mechanics, marshals and firemen, were left injured.

Gary Paffett, who described Sunday's affair as "the most embarrassing DTM race I've been in the last 15 years", said the surface of the concrete pitlane should be changed, as it was "impossible to stop" in the wet on slicks.

"It is dangerous like it is. [Replace with] asphalt or something," he said.

"There are other pitlanes that are concrete, like Nurburgring, but in that case it is a different concrete, I don't know. It is not as bad as this, that is for sure.

"Whenever you get water on this surface it is just like ice. It is impossible to stop the car.

Jamie Green, when asked if it should be resurfaced, agreed, telling Motorsport.com: "Yeah. There is definitely the wrong surface on the pitstop area.

"The pitlane is not tarmac, it is concrete, that is the problem.

Paffett said that he had an early warning in the weekend as he pitted in wet conditions in the Saturday morning practice, and was already struggling to stop his car on rain tyres.

"We knew it was slippery because I came in when it was wet yesterday [Saturday] morning and missed.

"So I knew it was very slippery but it just seemed when they were on slicks it was... it is not slippery, it is impossible to stop the car."

Loic Duval echoed Paffett's sentiments, saying it was "the most slippery pitlane I have ever had".

"It was massively slippery to be honest, I think it is the most slippery pitlane I have ever had," he told Motorsport.com.

"For sure the conditions were not nice when you are on slick tyres and it is raining but I had information that some guys were crashing in the pitlane so I had to be really slow.

"I was right behind Rene Rast and I saw him also going wide so I went really slow.

"Even though I was really wide too, I didn't touch anything. I think I was the first one not to touch anything but it was definitely really close.

"I've been racing for many years and I had some in the past when I'm on slick tyres and it is wet, you always have to be a bit more careful, but that much, I never had."

Duval said he was going "massively" slower than the pitlane speed limit and BMW's Philipp Eng, who ended the race on the podium in third, said he was "going in with 20 km/h and still sliding a lot".

"I was going in very slowly and it was very slippery. It was quite dangerous," said Eng to Motorsport.com.

"I think I was going in with 20 km/h and still felt I was sliding a lot so that was not funny."

Glock: Learning from past mistakes key to points lead

Drivers not to blame for Hungary pit chaos, say rivals 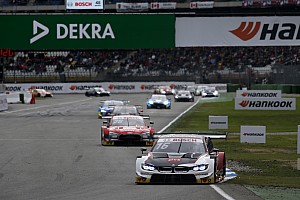