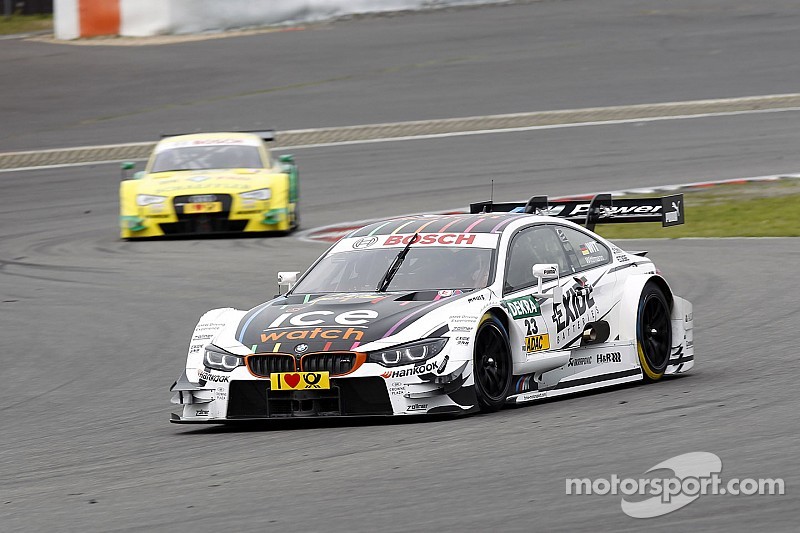 The race at the 3.478-kilometre circuit could actually determine the winner of this year’s Drivers’ Championship.

Munich (DE) -  The 2014 season enters the finishing straight with the eighth round of the year at the Lausitzring (DE) on 14th September. The race at the 3.478-kilometre circuit could actually determine the winner of this year’s Drivers’ Championship: after claiming his fourth win of the season at the latest race at the Nürburgring (DE), Marco Wittmann (DE) of BMW Team RMG now has 120 points to his name – 64 more than Audi drivers Mattias Ekström (SE) and Edoardo Mortara (IT).

Like Wittmann in the Drivers’ Championship, BMW Team RMG also leads the team competition with three races remaining this season. Team Principal Stefan Reinhold’s (DE) outfit tops the standings with 159 points after the home win in the Eifel Mountains. BMW is also sitting pretty at the top of the Manufacturers’ Championship with 302 points.

Last season’s race at the Lausitzring ended in disappointment for BMW Motorsport. BMW Team Schnitzer driver Bruno Spengler (CA) was the only BMW driver to finish in the top ten, coming home seventh. In 2012, the Canadian made history at the Lausitzring: BMW made its first appearance on the top step of the DTM podium after only the second race of its comeback season.

Spengler started from pole position and, after 52 laps of racing, crossed the finish line first at the wheel of the BMW Bank M3 DTM. This success laid the foundations for Spengler’s title win at the season finale in Hockenheim (DE). It was also BMW’s 50th victory in the DTM. Augusto Farfus (BR) finished third to complete a successful weekend for BMW.

The Lausitzring hosts the DTM for the 16th time this season. With ten different layouts, the circuit 130 kilometres south of Berlin (DE) is, along with the “Moscow Raceway”, the track with the most variants on this year’s calendar.

The DTM will race on the 3.478-kilometre layout, which features twelve corners. The circuit has been a permanent fixture on the calendar since 2000. The Lausitzring is driven in an anti-clockwise direction, with the BMW drivers tackling 52 laps before they see the chequered flag.

This season, for the first time, the International German Motorcycle Championship (SUPERBIKE*IDM) lines up on the same bill as the DTM at the Lausitzring. The starting field will feature many BMW riders on BMW S 1000 RR and BMW HP4 bikes, including reigning champion Markus Reiterberger (DE).

ARD will broadcast the DTM qualifying at the Lausitzring at 16:40 on Saturday. Fans watching on TV will be able to follow the race action live from 13:15 on Sunday, when the eight BMW drivers go in search of more points.

Jens Marquardt (BMW Motorsport Director): “The race at the Lausitzring heralds the business end of the 2014 season. It is a special place for us. In 2012, it was here that we claimed our first DTM victory since returning the series. Last year was a different story, when we did not look particularly good from a sporting point of view. Only Bruno Spengler finished in the points back then. With these memories in the back of our mind, we know that it is far from a given that Marco Wittmann will be able to take this opportunity to win the title with races still to come. Let’s wait and see how strong everyone is there this year. It goes without saying that the current situation with the performance weight will not make it easy for our eight drivers.”

Bart Mampaey (Team Principal, BMW Team RBM): “We are determined to make a point or two in the remaining three races, starting at the Lausitzring, all things permitting. Augusto Farfus finished third for us here in 2012 to earn a place on the podium. To be successful again this year, however, we will have to improve in qualifying and need to get through a race without any incidents.”

Charly Lamm (Team Principal, BMW Team Schnitzer): “It is obviously very special for us to race at the Lausitzring. In 2012 we claimed BMW’s first victory since making its comeback here with Bruno Spengler. In contrast, this season has not panned out so well for us so far. At least we have finished in the points at each of the last three races. In total we have scored points at six of the seven rounds. We want to improve this record at the Lausitzring – and, if possible, get back towards the front of the field.”

Ernest Knoors (Team Principal, BMW Team MTEK): “Our goal for the Lausitzring has to be to perform better than recently in qualifying. Our pace is usually good in the race. If we start from further up the grid, it will be easier to avoid the many little battles that take place in the pack. If we get through without any incidents, we are capable of mixing it at the very head of the field.”

Stefan Reinhold (Team Principal, BMW Team RMG): “We are having a truly incredible season. The win at our home race at the Nürburgring was the next big highlight for me and the team, and one of the best moments of my motorsport career so far. However, this success is in the past now. We have used the summer break to prepare meticulously for the final phase of the season. We obviously want to take the final step and defend our position at the top of the Driver and Team standings. We must remain focussed in our work if we are to make this possible.”

Augusto Farfus (car number 3, BMW Team RBM): “The Lausitzring is a special circuit for me. I claimed my first podium in the DTM here. However, last year did not turn out as well as expected for us. I am confident that we can put on a better show this time. I like the track, and the entire facility is excellent.”

Joey Hand (car number 4, BMW Team RBM): “I am pleased to be back racing after the long break. I don’t actually need any holidays, and could drive every weekend. We want to end the DTM season strongly. The Lausitzring is the kind of circuit we would call a ‘roval’ in the USA – a combination of a round circuit and an oval. I have often raced on tracks like this at home, and really enjoy them. Hopefully we can produce a good performance in the Lausitz region.”

Bruno Spengler (car number 9, BMW Team Schnitzer): “The Lausitzring has always been one of my favourite circuits. I obviously have fond memories of 2012: the 50th win for BMW, the first victory for the BMW M3 DTM, and the first success of the comeback season. That was very special. As such, I always really look forward to returning to the Lausitzring. The fans are great, and the atmosphere is electric.”

Martin Tomczyk (car number 10, BMW Team Schnitzer): “I am looking forward to getting going again. It has been a long break. We have tanked up on energy again for the last three races. The Lausitzring is a fascinating track. It is difficult to predict what our performance will be like there. As such, we will just wait and see. We know the circuit well and know that we can be quick there. Now it is just a case of putting everything together.”

Timo Glock (car number 17, BMW Team MTEK): “Last year we had difficulties at the Lausitzring, but some sections of the track have been resurfaced since then. We are intrigued to see what effect that will have on the race weekend. I am looking forward to getting back down to business after the four-week break from racing. It is also great to share the bill with the IDM for the first time. That will be fascinating for the fans.”

António Félix da Costa (car number 18, BMW Team MTEK): “The Lausitzring is probably the circuit on the calendar that I am least familiar with. I have only spent one day testing there with Formula 3 – and that was a few years ago. But that didn’t ought to be a major problem. I will familiarise myself with the track beforehand in the simulator. Furthermore, BMW and the teams can call on the experience gained in recent years.”

Marco Wittmann (car number 23, BMW Team RMG): “There is huge anticipation ahead of the Lausitzring. We have performed superbly in the recent races, especially in Spielberg and at the Nürburgring. As such, I can hardly wait to race at the Lausitzring. Last year we were not particularly strong there. However, I think our current package should allow us to play a major role in the race. The Lausitzring is not necessarily one of my favourite circuits, but I do have a lot of experience of it from my time in Formula BMW, Formula 3 and last year in the DTM. Although I was unfortunate and failed to finish in 2013, and will be carrying an extra ten kilograms of performance weight in the car this year, I remain confident. I will stick to my principles and take each race at a time.”

Maxime Martin (car number 24, BMW Team RMG): “I have raced at the Lausitzring in the ADAC GT Masters, so I already know the circuit. However, driving a DTM car there is completely different. As such I will have to learn the track from scratch again. I am already looking forward to the weekend. The Lausitzring is a great circuit, with a combination of slow and fast corners, as well as long straights. I hope we are competitive and can score a lot of points for BMW.”

DTM at the Lausitzring – venue of the decision?