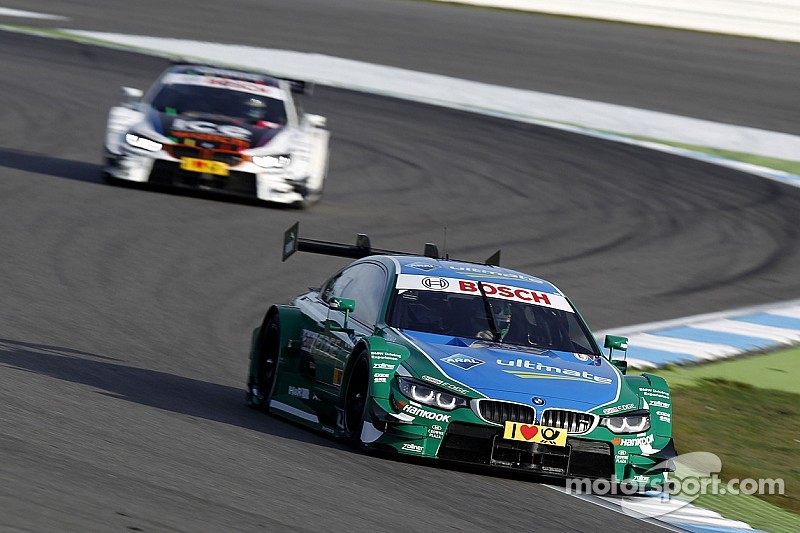 Hockenheim (DE) – Augusto Farfus (BR) from BMW Team RBM was the fastest BMW driver in the final DTM qualifying of the year at the Hockenheimring (DE). The 31-year-old, at the wheel of the Castrol EDGE BMW M4 DTM, clocked the fourth fastest time of 1:33.460 minutes in the third and decisive qualifying session.

This time put Farfus just 0.144 seconds off the pace set by Miguel Molina (ES, Audi), who will start Sunday’s final race of the season from pole position.

Farfus is joined in the top ten by António Félix da Costa (PT) in the Red Bull BMW M4 DTM, who starts from ninth and on row five of the grid. This was the first top-ten qualifying result for the rookie from BMW Team MTEK since the third race weekend of the year in Budapest (HU).

Facing an even bigger mountain as they look to claw their way back into the points over the course of the 42-lap race are Timo Glock (DE, DEUTSCHE POST BMW M4 DTM) in 19th, Martin Tomczyk (DE, BMW M Performance Parts M4 DTM) in 20th and Joey Hand (US, Crowne Plaza Hotels BMW M4 DTM), who will start from 21st.

Jens Marquardt (BMW Motorsport Director): “That was a disappointing qualifying from a BMW point of view. We witnessed a very good qualifying from Augusto Farfus, and António Félix da Costa also made it into the top ten. Across the board, however, the result is unsatisfactory – especially given that we looked really good after the free practices. We will now have to analyse the reasons and learn from this, in order to achieve a better result tomorrow. Congratulations to Audi on its impressive display.”

Augusto Farfus (car number 3, BMW Team RBM, 4th): “Looking at the performance of Audi I think P4 feels like a pole position. Tomorrow a lot can happen in the race. The team did an awesome job between free practice and qualifying. We made a huge change to the car and I have to thank them because they were brave, but in the end it paid off. I think we could have a great race and be on the podium.”

António Félix da Costa (car number 18, BMW Team MTEK, 9th): “It feels great to be back towards the front of the field and be battling for a place in Q3. We could have done just that today. However, my flying lap in Q2 was not quite good enough. That was my fault. Despite this, I am still very happy. After a season of highs and lows, it is nice to be able to go on the attack again at the finale.”

Marco Wittmann (car number 23, BMW Team RMG, 13th): “I am obviously not happy with qualifying – particularly at the end of such a successful season. We have mostly been able to produce superb performances in qualifying at other circuits, but it did not go to plan for us today. It just wasn’t our day. On top of that, I feel that I was blocked on my flying lap. I will find myself in a new situation in tomorrow’s race. I have usually started from one of the front rows on the grid in 2014. This time I will be starting from the middle of the pack. However, that serves as even greater motivation to attack and progress through the field.”

Bruno Spengler (car number 9, BMW Team Schnitzer, 14th): “My qualifying was just like so many other qualifying sessions this year: I was just not happy with the balance of my car and could not push hard enough. That is why I am further down the grid than I want to be. As far as the race for the Manufacturers’ title is concerned, it does not look great for us after qualifying. However, you never know what might happen in the race. I think it will be a real thriller tomorrow.”

Maxime Martin (car number 24, BMW Team RMG, 15th): “It is not the result we were expecting. It looks like we struggled a bit here strangely, but we have to look to tomorrow and try to get a good race. Nothing is finished and, as we saw in Zandvoort, anything can happen. It will be a long race.”

Timo Glock (car number 17, BMW Team MTEK, 19th): “It is hard to understand why qualifying panned out as it did. The pace was certainly there in free practice. Even in Q1 the car actually felt good, and I had no problem putting together a decent lap. On the whole, however, we were too slow. It would appear that the warm temperatures did not really do us any favours today.”

Martin Tomczyk (car number 10, BMW Team Schnitzer, 20th): “I don’t really know why we struggled so much here. But that is the DTM for you – extremely hard fought. I had a great weekend in Zandvoort, finishing third, and now find myself starting from 20th on the grid. That is really difficult to understand.”

Joey Hand (car number 4, BMW Team RBM, 21st): “Unfortunately this qualifying kind of reflects the way our year has been. Qualifying has been something of a lucky dip, and I have never really known where I was going to end up. I felt really good about this last qualifying session of the year, but then we had a problem with the door of my car and I was only able to complete one timed lap. That was obviously not enough, but such is life and such is racing. It is not for lack of effort or preparation from my boys at BMW Team RBM. They have done a great job all year long. I am proud of them.”