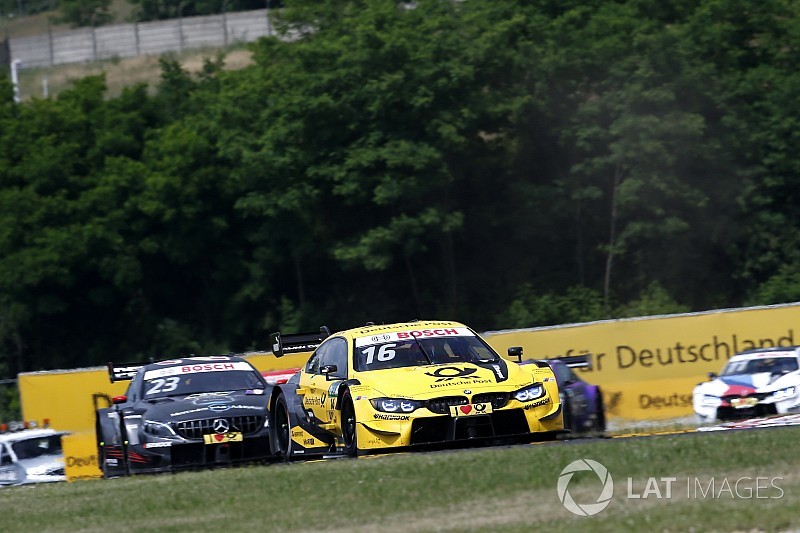 DTM points leader Timo Glock expects Mercedes to continue its strong form and keep an edge over BMW and Audi at the upcoming Norisring round.

With DTM cars losing 30 percent of downforce, making aerodynamics less important this year, Mercedes has enjoyed the strongest start to the season.

Mercedes took three pole positions and won four of the first five races, and was in prime position to dominate the Sunday race at the Hungaroring as well, if not for rain and red flag massively shaking up the order.

Despite that, five of the six Mercedes drivers are in the top eight in the standings with Gary Paffett, Paul di Resta and Lucas Auer in second, third and fourth respectively.

Glock benefitted from the Hungaroring chaos to finish second and currently leads the championship, but he expects Mercedes to still have the edge at the upcoming Norisring round.

"We know the Mercedes engine is very strong so they have the possibility to run maybe slightly more downforce in Norisring," said Glock.

"For sure they can have a bit of an advantage compared to us but we need to see.

"Last year we were strong, Bruno [Spengler] won the race, so it is still possible to be up there but it is gonna be a hard fight as usual."

Although Audi and BMW locked out the two race wins at the track in 2016 and 2017 respectively, Norisring has been traditionally a Mercedes venue as the Silver Arrows went unbeaten there for 13 years between 2003 and 2015.

Di Resta added that Mercedes has a "consistent" car in 2018, which will be a key factor for the team to bow out of the series in style.

Regarding his future, di Resta admitted that he has "no idea" where he will be racing next year but he feels ready to start a new project.

"I have no idea, we'll find out in time where I end up, I have no idea what I'll be racing next year," di Resta told Motorsport.com.

"Looking at the opportunities also, I'm still young enough to try to achieve something, even different.

"I have enjoyed my time in DTM I hope the championship continues.

"It has been part of my life, would be a shame to see it go and we will wait to find out what happens.

"It's always nice to go out on a high and of course we want to try and focus on the best job that we can and sign out on a high after 30 years in the championship."