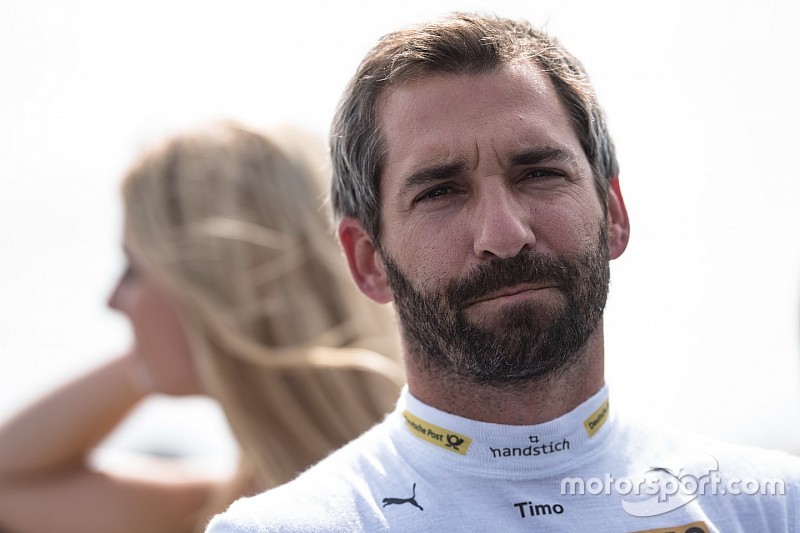 BMW driver Timo Glock has hit out at Audi after his incident with Nico Muller in Sunday's DTM race at the Nurburgring, accusing the Ingolstadt firm of "manipulating races".

Audi has come in for increasing criticism for using drivers to slow down rivals in the past couple of DTM rounds, with Muller in particular embroiled in controversy at both Moscow and Zandvoort.

Muller was accused of holding back a group of drivers that pitted early in the Sunday Moscow race, with rivals suggesting he was intentionally slowing up and helping his fellow Audi drivers, led by Mattias Ekstrom, to catch up.

In Zandvoort, an ailing Ekstrom was criticised by Mercedes driver Gary Paffett for brake-testing when the Swede had Muller acting as a tail gunner to protect his position.

Muller was involved in another incident at the Nurburgring, where another late-pitting strategy left him having to defend from Glock and the pair made contact during braking.

While Glock carried on without any significant damage, he only finished eighth behind the two Audis of Ekstrom and Jamie Green.

After the race, Glock, who received a warning for the incident, accused Audi of "manipulating races" repeatedly during the season, saying that the team "likes to sacrifice its drivers".

"I think it's embarrassing for Audi to manipulate races like that," Glock said. "We know this game from Moscow, from Zandvoort and from other races.

"Audi likes to sacrifice their drivers. Nico is playing it skillfully, no question about that. I'm very, very sorry for Nico that he is playing along here.

"I'm not saying it was his fault [for the crash in the race] but the problem is what Audi is doing to place him there.

"It's a pity for the fans and all others that are playing very fair. In my view, Mercedes and BMW work reasonable and fair.

"We've seen it in the past quite a few times. They [Audi] need to win the championship. This is why they are playing these games. And that's a pity for the sport.

"It's a good show, for sure, it all looks spectacular. But it's manipulating races, plain and simple, but we're familiar with that from the past."

Muller tried to cause safety car after crash

Glock further accused Audi of keeping Muller, whose car was significantly damaged after the incident, out on track in order to bring out a safety car.

"When Muller stays out with a flat tyre for two laps, it's clear what they were trying to achieve," continued the ex-Toyota and Marussia F1 driver.

"They were thinking hard whether this might lead to a safety car and whether they would gain an advantage."

However, Muller, who eventually retired his car, claimed he only stayed out hoping the damaged parts would fall off his car.

"I thought maybe the [damaged] parts would fall off and I would be able to finish the race," said Muller.

When asked if he was trying to bring out the safety car, he added: "Then I would have parked the car somewhere. No."

Sunday Nurburgring winner Robert Wickens joined Glock in criticising Audi's tactics, which he reckons were "over the limit".

"The Audi guys were trying to be clever. It was pretty obvious what they were trying to do," said the Canadian, who is weighing up his career options in the wake of Mercedes' impending DTM exit.

"In the end it's part of the sport, but I thought it was maybe a little bit over the limit because they were clearly brake-testing me at corner apexes and not accelerating out of corners.

"It's not really fair racing, but it is what it is. In the end there was no contact, so you cannot blame anyone."