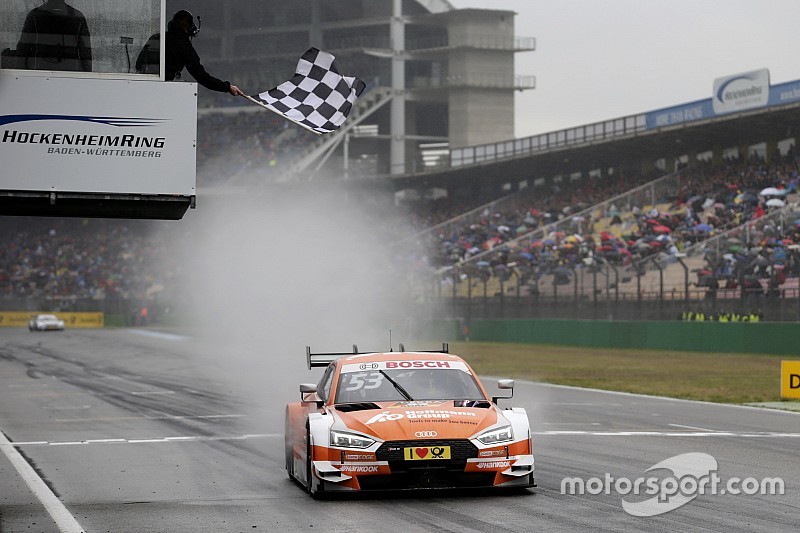 Green grabbed the lead of the race from polesitter Timo Glock on a side-by-side restart following an early safety car period, and though he was adjudged to have jumped early and slapped with a penalty, he built enough of a margin before his pitstop to emerge with a comfortable net lead.

The Audi driver then managed his advantage on the run to the finish, leading home Mercedes driver Gary Paffett in a British one-two.

While those at the front of the grid got away cleanly at the start, the safety car was deployed early on to recover the stricken Mercedes of Robert Wickens.

Canadian Wickens tried to dive up the inside of Nico Muller into Turn 1, but as the pair started to run out wide they collided with Loic Duval as the Frenchman turned in, spitting Wickens into the gravel.

With Wickens’ car recovered, the field bunched for a side-by-side restart with Glock ahead of Green, who had started third but inherited second as Rene Rast bogged down away from the line.

Green then leapt away as Glock was swallowed up on the restart, charging into an early lead ahead of Saturday race winner Lucas Auer.

The Briton was later handed a five-second penalty to be served before his pitstop for bolting too early, but continued to build his advantage as rain began to arrive before the shower increased in intensity.

Green served his stop a lap later than most of those who had waited for the rain, but despite a sluggish getaway from the penalty box he still had plenty in hand to regain the lead when Auer visited the pits two laps later.

The Brit duly managed his lead from there to secure his first win since the series’ visit to Zandvoort last year.

Paffett was part of the pack that waited until the rain arrived to pit and secured second with a pass on BMW driver Marco Wittmann at the hairpin, the pair having both got by Auer when he ran wide at the same spot on his out-lap.

Auer did however follow up his victory a day earlier with fourth, while Nico Muller kept Paul di Resta at bay in a late squabble for fifth.

Mike Rockenfeller finished best of those who pitted early for slicks before later having to swap to wets ahead of polesitter Glock, who produced a late charge to claim eighth.