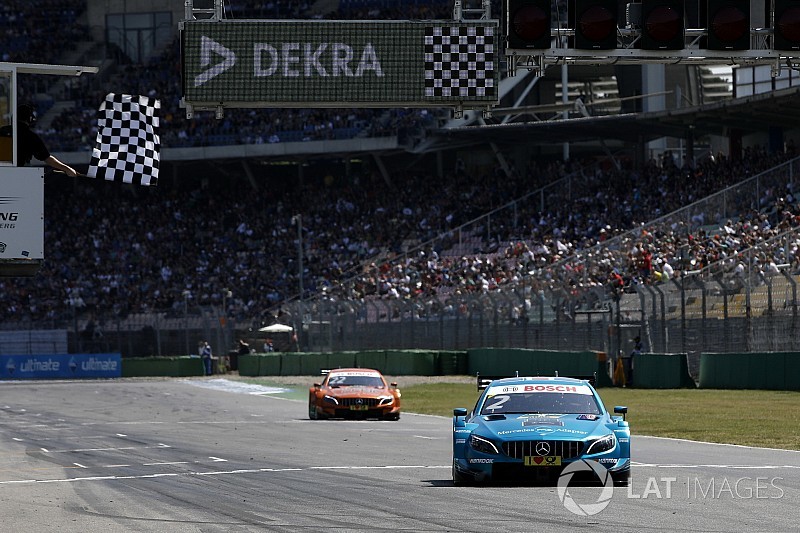 Mercedes' Gary Paffett converted pole position into victory in the opening race of the 2018 DTM season at Hockenheim.

Paffett was required to make a deft move through the high-speed Turn 5 on Mercedes stablemate Lucas Auer after the Austrian reacted to the early race leader's mandatory stop on lap 15 of 36 by pitting one tour later.

Auer had lifted himself into contention after a rapid start in which he deposed BMW pairing Marco Wittmann and Timo Glock in the opening two laps.

Following the stops, and running off-sequence as half the field had yet to pit, Paffett chased Auer through Turn 5 and edged his Mercedes ahead under braking for the hairpin.

That meant the pair cycled back into the top two positions in the final third of the race and Paffett incrementally grew his lead to a final gap of 1.4s.

Auer's charge had come under threat from former Formula 1 driver Glock but after one half-hearted attempt into the hairpin at the halfway distance, Glock faded to a lonely third. After the race Auer was fined EUR1,000 for having a cooling fan on the grid which is considered illegal equipment, but was not penalized further because the team didn't use it.

Mercedes' Edoardo Mortara was a late climber to fourth having spent most of the race in a four-car train in the lower reaches of the top 10.

He was helped by his rivals, most notably Mike Rockenfeller after the Audi driver ran wide at Sachskurve and allowed a succession of cars through before to 14th.

A similar decline removed Wittmann as a challenger as he dropped from a likely fifth all the way down to 11th.

That meant it was Mortara, the returning Pascal Wehrlein and Bruno Spengler left to compete for fourth and it was decided by Mortara's dive down the inside at the hairpin. Wehrlein put up little defence and was able to comfortably hold on to fifth ahead of Spengler.

Rast endured a chaotic race as he went long on his first stint that involved an illegal pass on Rockenfeller that forced him to cede a position. He then went airborne at the Turn 14/15 kink and fell outside the top 10 before his stint of 21 laps cycled him to the lead briefly.

Dani Juncadella had run the same distance and he followed nose-to-tail with Rast into the pits and a similar stop time meant the Mercedes and Audi driver ran side-by-side out of the pitlane exit. Rast received a post-race warning from stewards.

Juncadella would have the final say, taking eighth ahead of Rast, but the pitlane incident is still under investigation.

Last year's European Formula 3 runner-up Joel Eriksson came close to a point on his DTM debut but lost out in battles with Rast and Wittmann.