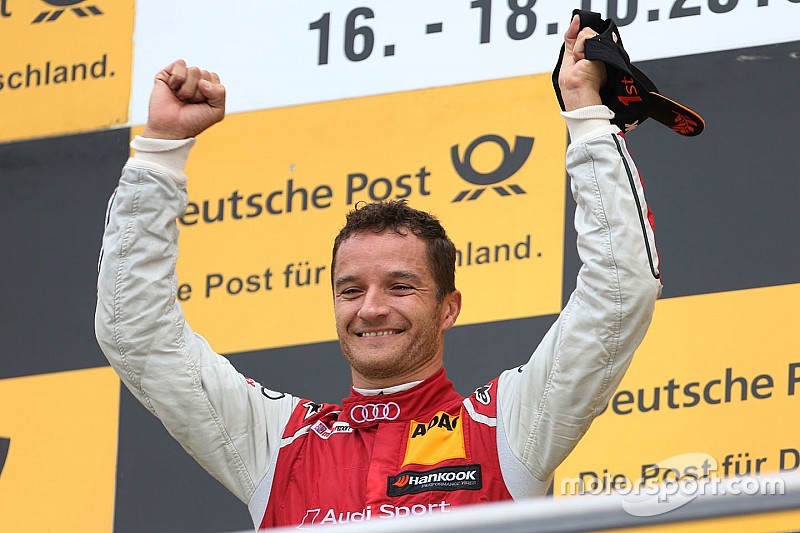 Pascal Wehrlein emerged as the 2015 DTM champion in a carnage-filled penultimate race of the season at Hockenheim as Audi veteran Timo Scheider took his first victory since 2010.

Wehrlein had started well behind his main rivals Edoardo Mortara and Mattias Ekstrom but an action-packed opening stint saw him emerge ahead of the duo and he then brought the car home to secure the title.

Off the line, poleman Maxime Martin got off to a stellar start, while Miguel Molina bogged down behind him - as did title contender Ekstrom further down the grid.

With Ekstrom's struggles bunching up the mid-pack and impeding Wehrlein, the duo ended the lap well outside the top 10 - while Mortara headed the contingent of title contenders in seventh.

However, the Italian had picked up a puncture when fighting teammate Molina, which eventually forced him into the pits.

Out front, Scheider kept up with Martin and eventually got a good run out of the hairpin for the lead, passing the Belgian on the inside Turn 7.

However, just as an Audi driver had taken the lead, the championship hopes of Ekstrom took a massive hit - the Swede had been passed by Wehrlein and tried to retake the spot, bumping into the German and then himself being spun by another Mercedes of Robert Wickens.

A subsequent crash between Gary Paffett and Molina, which Wehrlein managed to narrowly avoid, brought out the Safety Car - with Wickens handed a drive-through along with title outsider Bruno Spengler, whose slim chances evaporated after he had punted Adrien Tambay on the opening lap.

After the restart, Wehrlein, backed by Christian Vietoris acting as wingman, powered into the points-scoring top 10, while Martin slipped behind Jamie Green to third place.

Meanwhile, a recovering Mortara had actually passed Ekstrom, only to afterwards send the BMW of Timo Glock into a spin at Sachs, which resulted in a drive-through and an eventual retirement for the Italian.

The status quo out front would remain until the chequered flag, with Scheider maintaining a solid lead over Green and Martin holding off Paul di Resta for third.

Having been allowed through to ninth by Maximilian Gotz, Wehrlein then passed Antonio Felix da Costa for eighth.

And while Ekstrom recovered to ninth, forcing his way past Vietoris and then overtaking both Felix da Costa and Gotz on the final lap, Wehrlein emerged as champion.