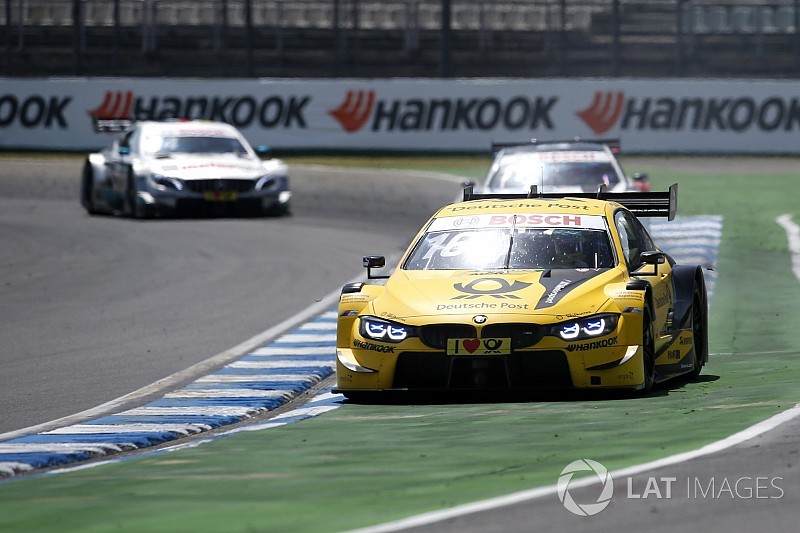 A stunning battle between Timo Glock and Gary Paffett through much of the DTM’s finale at Hockenheim went the way of the BMW driver in an entertaining race.

The duo’s battle began as soon as the mandatory pitstop ended, with Glock pitting a lap before Paffett on the 14 tour out of 35.

A rapid in lap and a pitstop that matched Glock’s allowed Paffett to exit the pitlane right on the rear of the BMW, aided by initial second-placed Lucas Auer getting a penalty for a jump start.

The pitstop cycle then gave Glock a lead of around a second at the halfway point which the rapid Paffett quickly reduced.

Both then traded the place frequently into the Turn 6 hairpin, through the high-speed run into Turn 7 and the subsequent quick-fire corners.

Glock’s long-term lead meant he had more DRS uses in reserve compared to Paffett, and Glock finally sealed the win with 15 laps remaining after he covered the Mercedes into the Sachs curve.

Their battle meant that Joel Eriksson had caught up to the chase for second and the European Formula 3 graduate lost out after he touched wheels with Paffett through the final corners.

But while Eriksson was unable to depose Paffett, Audi’s Mike Rockenfeller defeated the Mercedes driver on the final lap.

Paffett’s battle with Eriksson opened the door to Rockenfeller made a move into the final corners of the penultimate lap after a scare when he collided with debris in the middle of the track at the right-hand Turn 16. Not to be deterred, Rockenfeller passed Paffett on the last lap for second.

Eriksson would then take fourth place ahead of Loic Duval as the Frenchman completed his double duty weekend of DTM and the FIA World Endurance Championship at Spa.

Pascal Wehrlein enjoyed a solid return to the DTM with sixth in the second race, having been fifth on Saturday.

Reigning champion Rene Rast would rue a late touch of the grass that cost him several places, ending the day in seventh after starting second.

Bruno Spengler ran the third-longest opening stint of the race, which helped him recover from the back of the grid to eighth ahead of Mercedes driver Paul di Resta and BMW’s Augusto Farfus.

Auer’s penalty for a jumped start meant he could only finish in 15th ahead of Mattias Ekstrom in his final DTM race.

Jamie Green was 17th after a pitlane start for a fuelling problem that meant he missed his slot for the information lap.

Dani Juncadella also jumped the start and ended the day last in 18th place and his Mercedes teammate Edoardo Mortara retired not long after he struggled to get away from the grid at the race start.