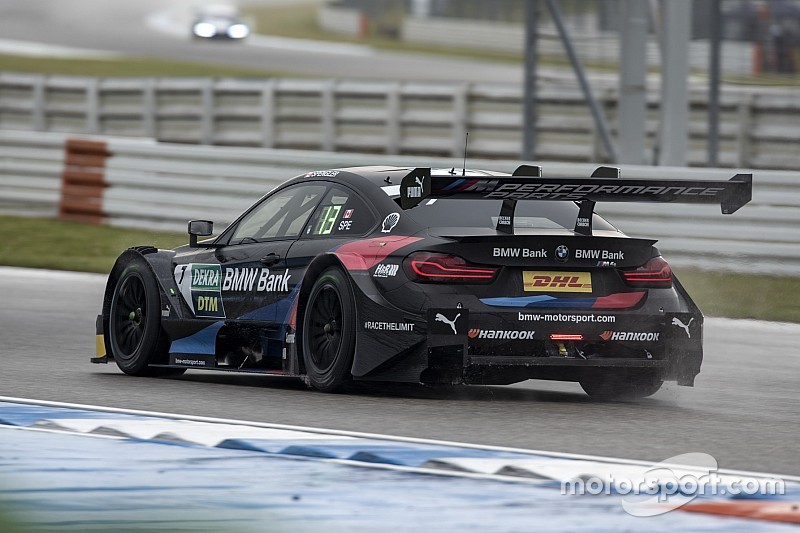 BMW veteran Bruno Spengler topped the times in a wet second free practice session ahead of this weekend’s DTM opening round at Hockenheim.

Spengler emerged atop the pile after the top spot changed hands between all three manufacturers – Aston Martin included – during the closing minutes as conditions seemed to improve a little.

The time set by the Canadian’s Team RMG-run M4 was enough to edge out a last-lap effort from the R-Motorsport Aston Martin of DTM debutant Jake Dennis – the Briton’s time fell just 0.014 seconds short as he flashed under the chequered flag, albeit 13s off a dry pace.

Another BMW, that of Marco Wittmann, rounded out the top three ahead of two drivers who spent substantial periods at the top of the times.

Rene Rast (Audi) was fastest in the early going, while Timo Glock (BMW) was quickest in the mid-period of the 30 minutes, before they ended up fourth and fifth respectively.

A bit of a time gap behind Juncadella preceded three more Audis – those of Robin Frijns, Loic Duval and Mike Rockenfeller, who rounded out the top 10.

Aston drivers Ferdinand Habsburg and Paul di Resta only completed a handful of timed laps, Habsburg also visiting the Sachskurve gravel briefly, while BMW’s Philipp Eng failed to get a time on the board at all.