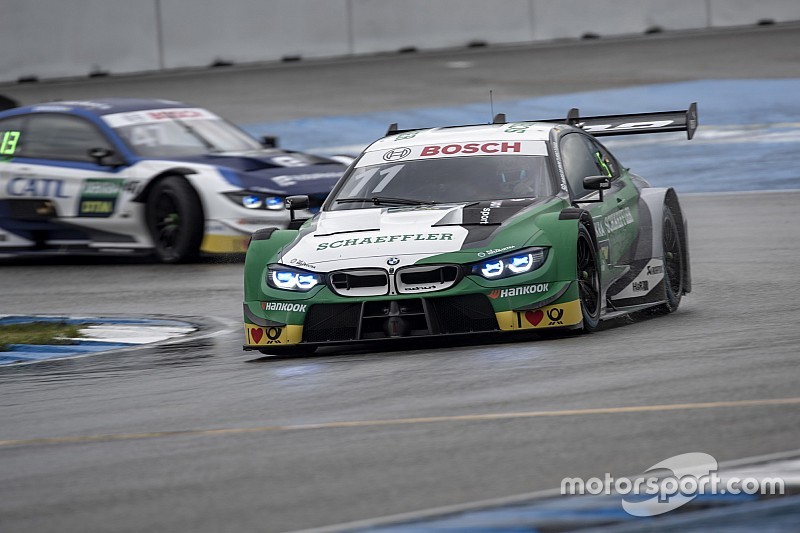 Two-time DTM champion Marco Wittmann put in a spectacular final qualifying lap to clinch pole position for the opening round of the DTM at a wet Hockenheim.

Wittmann wrung everything from his RMG BMW M4 on the last lap, the car squirming around the final corners on the slippery track to lower his own previous benchmark by seven tenths of a second.

Behind him, the Team Phoenix Audi of Mike Rockenfeller was on a similar flier, and the 2013 DTM champion crossed the line with a time just 0.066s adrift of Wittmann’s.

This pair were in a class of their own, although Audi’s 2017 title winner Rene Rast potentially could have challenged for pole, only for track positioning to bring him into the same territory as Rockenfeller with a couple of minutes remaining.

Rast gesticulated and then dropped back from Rockenfeller, likely costing him a shot at pole, although he was able to claim fourth on the grid.

It was Paul di Resta who came through to claim third on the grid on the first outing for the R-Motorsport Aston Martin team – the Scot was one of the last to cross the line at the chequered flag and his final lap elevated him up the order, albeit almost a second adrift of the pacesetting duo.

The third row also featured an Audi and an Aston – apart from di Resta, Audi’s Robin Frijns was the only driver to make a mid-session pitstop, and he rejoined to take fifth, with Jake Dennis securing an excellent sixth in his Aston on his DTM debut.

The top 10 was completed by the Audi of free practice pacesetter Nico Muller.

Philipp Eng’s miserable weekend continued – after failing to put a time on the board in FP2, his BMW coasted to a halt at the pit exit at the start of the session, prompting a red flag while he was towed out of the way.

DTM new boy Jonathan Aberdein spun exiting the final turn on his out-lap after the red flag, looping across the track and crunching his WRT Audi into the inside wall, before continuing to take 16th position.