Although Lawson made a rapid start from pole position and covered the inside line for the first braking zone, van der Linde cut the corner in what he described as a risky attempt to take the lead, sideswiping the Ferrari at the apex.

This left Lawson with a heavily damaged car and paved the way for Maximilian Gotz win the title by three points – overcoming Lawson’s substantial 22-point lead in the championship.

Marko hit out at van der Linde for colliding with Lawson for three races in a row at the end of the season, and the Audi’s driver attempt at holding off Gotz that left him with a puncture and ultimately put him out of the running for points.

"That was a completely brainless manoeuvre by Kelvin van der Linde,” Marko told Motorsport.com’s sister site Motorsport-Total.com. “And it wasn't the first. He also hit the back of Liam at Hockenheim. I watched the replay and he was going to take out the Mercedes later as well. Such a man should be banned.

"Is there a penalty point system in the DTM? Because with his whole season and above all: attacking the Mercedes afterwards, when he actually has hardly any chances left. For me, that is extremely unsportsmanlike conduct, which in my opinion should be sanctioned accordingly.

"He should be banned. And in Formula 1 he would automatically have so many points through a penalty point system that a ban would be imposed."

Van der Linde was handed a five-second penalty for leaving the track at Turn 2 and rejoining the track in an unsafe manner. The stewards argued that a severe penalty wasn’t necessary as the collision that followed was not intentional.

Asked for his thoughts on the sanction, Marko said: “If it wasn't intentional, then the race director is not qualified enough to take part in such a championship. Because there can't be such a misjudgement."

Such was Lawson’s championship advantage that he could have clinched the title even without scoring points in the Norisring finale. However, that changed when Mercedes ordered both Lucas Auer and Philip Ellis to give up their positions, allowing Gotz - who was running third at that point - to bag the full 25 points for victory and with it the drivers’ crown.

Asked what he made of the title being decided by team orders, Marko added: "It was not a very glorious end to the season. That Mercedes then plays it so ostentatiously." 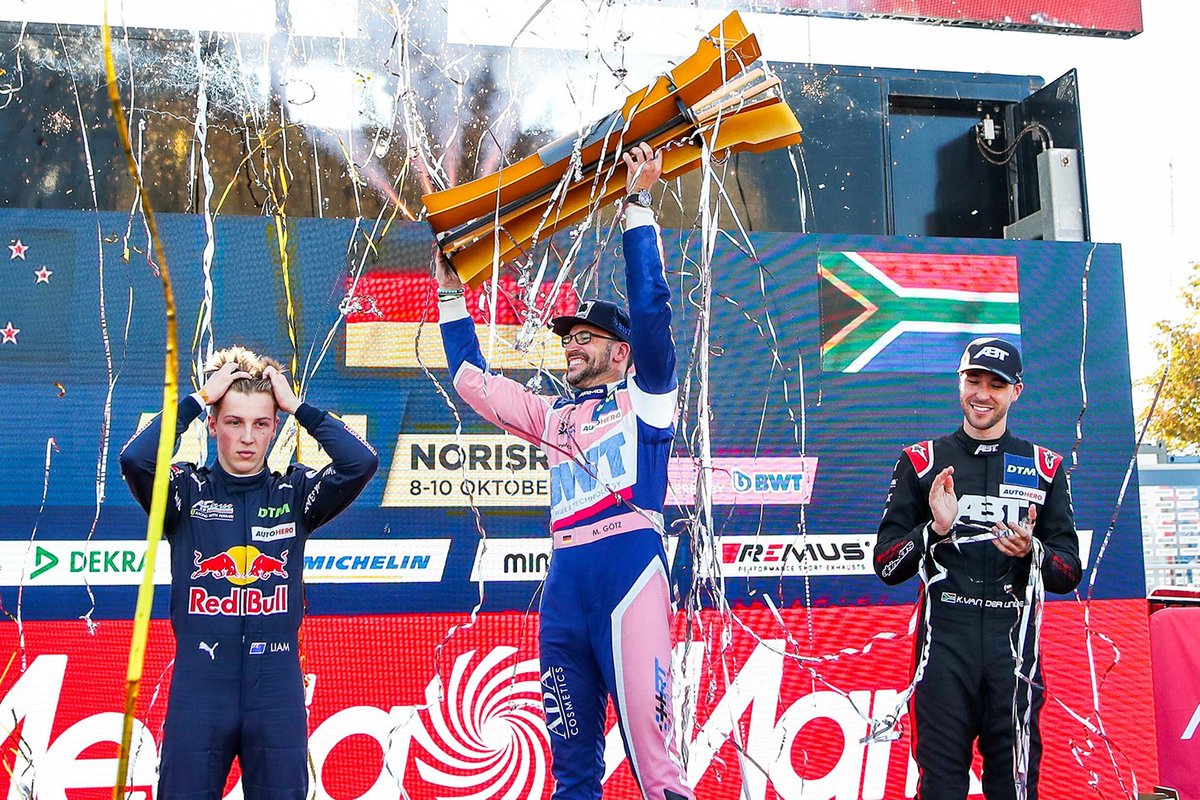 Abt Sportsline driver van der Linde went into the second half of the season as the favourite for the title, having held a 33-point lead over eventual champion Gotz after his third victory at the Nurburgring in August.

Lawson did manage to turn the tables when the Abt driver hit a difficult patch on Audi’s weak tracks, but van der Linde fought back with victory in the opening Hockenheim race to draw level with the Red Bull driver in the standings.

However, during the final three races of the season, van der Linde was responsible for three separate collisions with Lawson, before another incident with Gotz in the title decider finally ended his hopes of winning the championship.

Ten-time grand prix winner and DTM chief Gerhard Berger feels van der Linde’s aggressive attitude undid his good work in the first half of the season and ultimately led to him losing the championship to a more consistent Gotz.

“As I saw it, [Lawson] could do it [and win the title going into the final race],” Berger said. “He got a good start and was clear in the lead. He turned into the first corner and Kelvin came for whatever reason, driving into his car. Well, that's something you have to ask Kelvin and Liam [about] but Liam was in a good position [until then].

“I think at the end of the day with Kelvin his aggression in the last few races maybe cost him the championship because he was clearly in a good position to win this championship but the mistakes that were coming together were too many.”