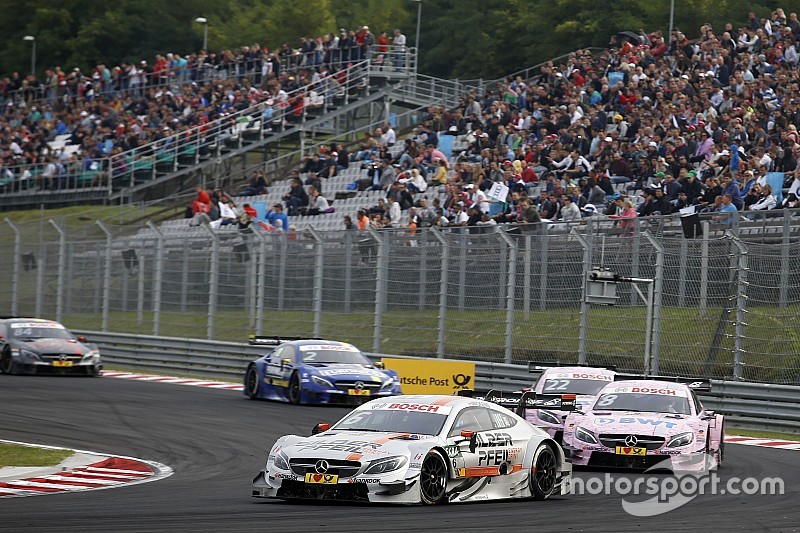 Mercedes has announced that it, along with fellow DTM manufacturers, will scale back to a six-car line-up from 2017 onwards.

The idea to downsize from eight-car line-ups to just six cars per marque has been discussed by Mercedes, BMW and Audi throughout 2016 - and Mercedes' announcement now means the DTM grid is set to shrink from 24 entries to 18.

While neither Audi nor BMW have formally confirmed they would be downsizing as well, parity in car numbers between manufacturers is believed to have been a necessary stipulation of the negotiations, and Mercedes' statement makes it clear the reduction is a uniform decision.

"Following the final decision that manufacturers will start the 2017 DTM season with six cars, we have investigated various implementation scenarios," Mercedes boss Ulrich Fritz said in a statement.

For 2017, neither Mucke nor ART will be involved, with HWA running all six cars.

"Of course, it is a pity that the successful cooperation with Mucke Motorsport and ART Grand Prix will not continue in the DTM," Fritz continued.

"If you could see how happy the entire Mercedes-AMG DTM team was at the Lausitzring for Mucke's first victory, then you'd know how our appreciation is for Mucke Motorsport.

"That is why we are very pleased that the cooperation between Mercedes-AMG and Mucke Motorsport will continue in various areas, such as Formula 3.

"ART GP has done an incredible job over the last two years, without any prior experience in the DTM," Fritz concluded.

While Audi's Timo Scheider and BMW duo Antonio Felix da Costa and Martin Tomczyk have all confirmed they're bowing out of the DTM after 2016, all of Mercedes' eight drivers are yet to announce their plans.

Da Costa can picture DTM return "in a few years"

Mortara leaves Audi for Mercedes for 2017