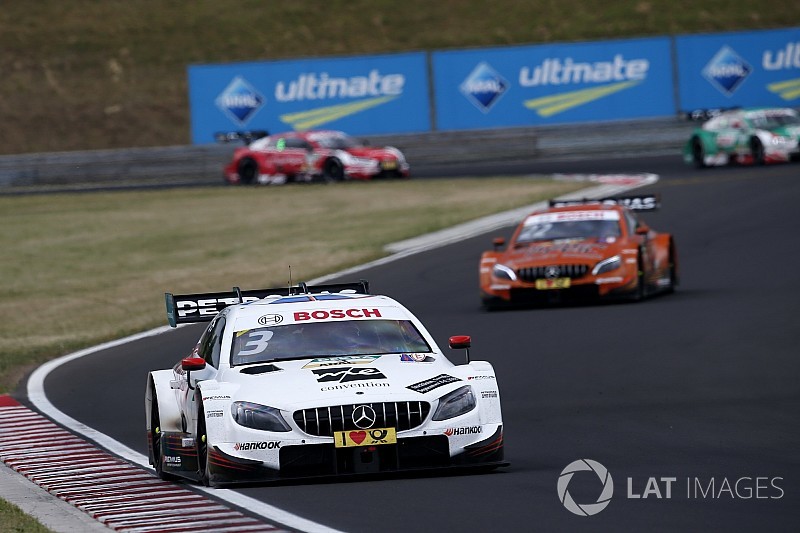 Di Resta was the early leader in the first race of the Budapest weekend, but Auer, who had pitted three laps earlier, passed him when the Scotsman changed tyres and was on colder rubber.

However, di Resta made an easy overtake on Auer soon afterwards and went on to win the race.

Two-time DTM champion Scheider, who retired from the series at the end of 2016, criticised the move, and accused Mercedes of manipulating the outcome of the race.

"You can see the brake lights at Lucas Auer just as he lets Paul past," Scheider told German TV channel Sat.1. "He signalled very clearly and let him pass inside.

"That's a no-go, we don't want to see that. We want to see racing drivers drive the races and the best one should win in the end. This is what we've always been upset about. The fans out there, they are not stupid.

"I've been doing this for years and I know that even if there is no official radio communication while driving, you know before the race what to do in a situation."

Fritz denied that there were team orders in use during the race, and said the situation between di Resta and Auer was merely an example of good "teamwork" between the two drivers.

He added that Scheider's "comments were not made based on facts".

"I have discussed this with Timo Scheider yesterday at length and I have completely different opinion," said Fritz. "I think it was the case that his comments were not made based on facts.

"He for example said that we can give messages with the pitboard, which is not true because the pitboard is only allowed without any numbers, without any spellings and whatever.

"So that is for sure not true and I can only say, we have never ever given out an order that Paul di Resta is to win this race and therefore it was not a team order or whatever.

"In the end we agree to disagree [with Scheider] because I think what our drivers did yesterday was a good example of teamwork.

"The drivers help each others, yes, that is for sure but it is the individual driver decision that I cannot comment on this.

"I think if two drivers apply this strategy then it is acceptable for me. In the end it is about racing, it is about getting the best result also for the individual and from the brand."

Glock: Learning from past mistakes key to points lead