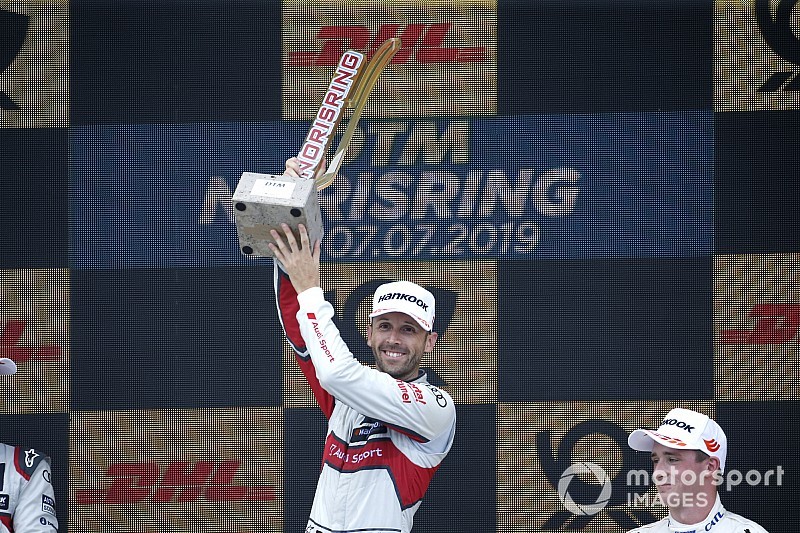 Championship leader Rene Rast recovered from stalling at the start to win a frantic opening DTM race at the Norisring in convincing fashion.

Audi driver Rast's winning margin of 34.498s over Nico Muller owed plenty to a decision to pit just as an early safety car was called, which helped him cycle back into the top top five at a time where the leaders were yet to pit.

While Rast stalled at the start, Muller made a strong getaway from pole position to lead the BMWs of Bruno Spengler and Phillip Eng - who had qualified second but was demoted five places for blocking a rival - into the first corner.

The WRT Audi of Pietro Fittipaldi was a casualty of a mid-pack melee on the exit of the corner though, which ultimately prompted a safety car to be called while the field was on its fourth lap.

Rast was one of three drivers - alongside the R-Motorsport Aston Martin Vantages of Daniel Juncadella and Jake Dennis - to stop on lap three, and emerged from his stop in 10th, ahead of everyone else who had pitted.

He then made progress through the order when the race restarted on lap nine, passing Jamie Green into the first corner for fourth at the start of lap 20, and assumed the lead when Muller pitted at the end of lap 30.

At that point Rast had 9.9s in hand over the RBM BMW of Joel Eriksson, but the 2017 champion raced away from there to claim his third victory of the season by a crushing margin.

Second only went Muller's way at the final corner, as he passed Eriksson to claim runner-up spot.

Muller rejoined from his stop in seventh, but made light work of the Astons of Dennis and Habsburg, then passed Daniel Juncadella and Marco Wittmann in quick succession, before hunting down Eriksson.

The BMW driver defended boldly into the first corner, and on the exit, in the final laps to hang onto the position, only to cede the place when Muller slithered his BMW up Eriksson's inside into the final hairpin as they prepared for the run to the finish.

Loic Duval was excluded from his third position in qualifying and sent to the back of the grid, but cut his way through the pack early on and recovered to fourth, ahead of the BMW of Bruno Spengler - who started second to Muller.

Daniel Juncadella scored R-Motorsport's best result since joining the DTM by finishing sixth, but had been a podium contender for much of the race.

While Dennis and Habsburg faded after their stops elevated them up the order, Juncadella retained a strong pace relative to the BMWs and Audis and held a net fourth once all pitstops had been completed.

Juncadella then reeled in the Marco Wittmann, but the Aston's straightline speed deficit to the BMW proved a major handicap on the run to the first corner and, by the time he passed Wittmann with an excellent move around the outside into the chicane, Muller was already a long way up the road after dispatching both.

That delay also allowed Duval and Spengler to close up and ultimately pass the pair.

Dennis and Habsburg finished a lap down, but advanced from 16th and 15th respectively to complete the points.