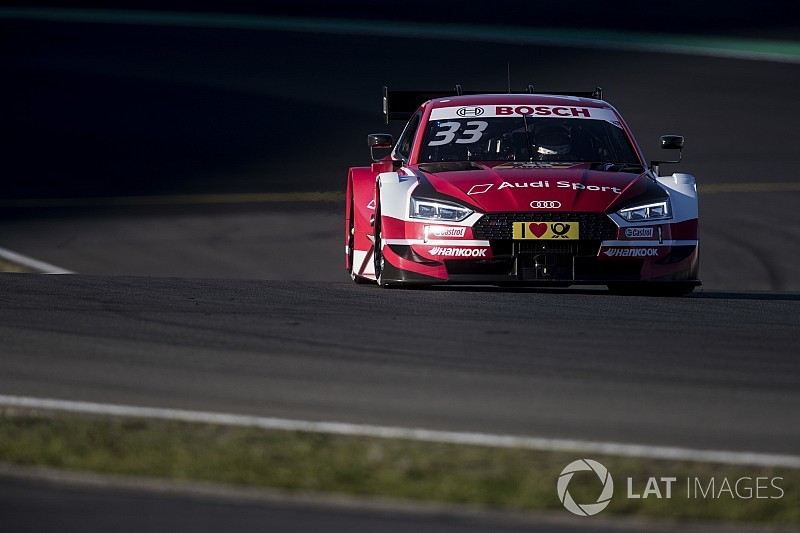 Rene Rast won a scrappy DTM race at the Nurburgring in which Gary Paffett resumed the title lead ahead of Mercedes teammate Paul di Resta.

Rast's victory was secured in the first stint as he sternly blocked the advances of fellow front-row starter Paffett on the row to Turn 1 before building a lead of several seconds over the chasing Mercedes driver and BMW's Bruno Spengler.

The battle between the Mercedes and BMW driver only further helped Rast bolt clear with the duel ending once Spengler dived past Paffett at Turn 1 on lap 14 of 40.

Rast pitted from the lead two laps later with Paffett following him in and Rast returned to the track well clear of his rival to win by a margin of 0.8s.

Paffett would be demoted to third by Spengler after his rival served his mandatory pitstop two laps later than Paffett.

The Mercedes driver briefly threatened Spengler but fell back to finish a lonely third behind his foe.

But the podium finish was enough to elevate Paffett back into the title lead by eight points after di Resta was spun out at Turn 4 by a misjudged attempted pass by Philipp Eng, who hit the Mercedes on the inside and forced it off the track.

Di Resta had been fifth at the time but dropped to 11th before eventually falling to last after the pitstops had shaken out, with Eng in 16th after serving a drive-through penalty for his part in the collision.

BMW's Marco Wittmann was fourth after failing in a bid to overtake Auer for fourth and instead jumping the Mercedes man through by strategically making his pitstop one lap after Auer.

But Wittmann fell back to fifth in the final laps when BMW's Timo Glock surged by.

Glock's race had previously threatened to fall apart when he was drawn into a contentious battle with Dani Juncadella.

A superb start from 12th on the grid allowed him to rise up to ninth and behind the Mercedes, but in his haste to pass Glock shoved Juncadella wide on the run through the sweeping long run of Turns 2 and 3.

That dropped Juncadella to 15th with Glock lucky to continue in eighth, albeit with a warning for his aggression - with Juncadella earning his own for a similar move on Glock on the opening lap.

Glock then rose to the lead by stopping later than all the field except Audi's Mike Rockenfeller and Loic Duval.

The BMW driver returned to the field in sixth before battling his way to fourth, pressuring Paffett before running wide at the chicane approaching the Coca-Cola Curve.

Wittmann then finished fifth with Rockenfeller - the penultimate driver to make his pitstop - taking sixth.

Pascal Wehrlein made up for a poor start that drew him into the midfield pack to finish seventh ahead of Duval - the last driver to make his pitstop - Augusto Farfus and Nico Muller.

Edoardo Mortara and Robin Frijns clashed on the opening lap, forcing the latter into a spin, and the pair finished 13th and 17th respectively.

Audi's Jamie Green earned a warning for forcing Frijns into the grass late on and ended the race in 14th ahead of Juncadella and Eng.