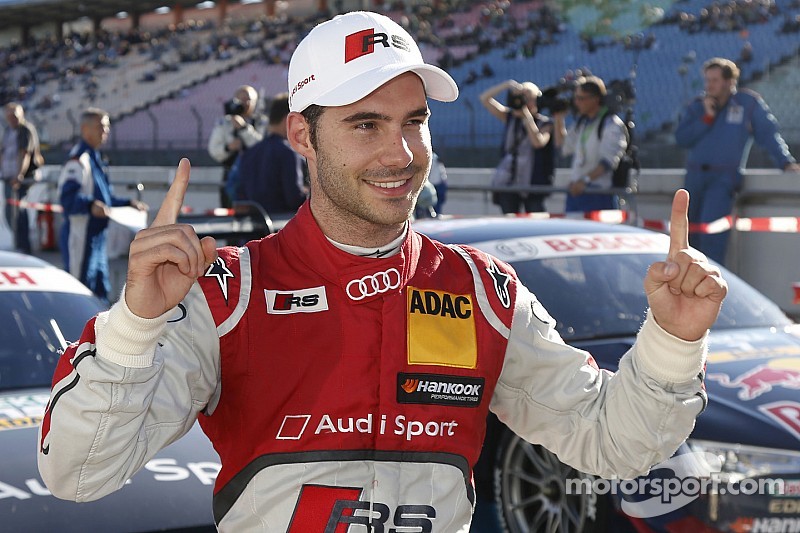 Ingolstadt/Hockenheim, October 18, 2014  Strong showing by the four rings in the DTM finale at Hockenheim (Sunday live on Das Erste starting 13.30): Miguel Molina, Mattias Ekström and Edoardo Mortara secured the best three grid positions for Audi for the last race of the year. Six Audi RS 5 DTM cars in total made it into the top eight in qualifying. Before the race starts, a driverless Audi RS 7 and the new Audi TT cup will be making a grand appearance as well.

It was a qualifying session exactly to the liking of Dieter Gass, Head of DTM at Audi Sport: Six Audi cars in Q3 and three in the top three positions of the grid: That was precisely the strong showing we needed here in qualifying. I can only tell the whole squad: well done! If we repeat this performance tomorrow in the race, then well have very good chances of winning the manufacturers title. Thats clearly our aim.

I now have a good chance of celebrating my first victory in the DTM tomorrow.

Id like to thank Audi and my team who worked hard for this result. And this work has paid off, said Miguel Molina, who secured the best grid position for the third time in his DTM career. The pole position is fantastic and the whole result is great for Audi. The last races didnt go so well for me, but now were at the very front again.

Adrien Tambay, who in his Playboy Audi RS 5 DTM had started from the pole position in the season opener at Hockenheim, in eleventh place missed the top eight by 0.130 seconds. Nico Müller (Audi Financial Services Audi RS 5 DTM/Startplatz 18) complained about lack of grip.

For Audi, this marked the third pole position of the year and the eighth of eleven possible ones in the season finale at Hockenheim since the brands return with a factory-backed commitment in 2004.

But Audi is not only set on thrilling the fans at Hockenheim with the RS 5 DTM. The brand with the four rings has developed the worlds sportiest piloted driving car. On Sunday before the start of the DTM race, the Audi RS 7 piloted driving concept will demonstrate its dynamic potential and driving skills with a fast lap on the Hockenheimring  without a driver.

Soccer star Bastian Schweiger, who plans to visit Audi on Sunday to keep his fingers crossed for the Audi drivers in the DTM finale, is among those who would not want to miss the lap of the RS 7 piloted driving concept.

The new Audi TT cup that was unveiled on Friday will be doing its first public lap on a race track before the start of the DTM race as well. Prof. Dr. Ulrich Hackenberg, Member of Audis Management Board for Technical Development will be at the wheel.

Dr. Wolfgang Ullrich (Head of Audi Motorsport): The four rings are making a grand appearance at Hockenheim this weekend: the world premiere of the new Audi Sport TT Cup yesterday and the lap of a driverless RS 7 tomorrow. The really brilliant performance of the Audi Sport DTM squad in qualifying perfectly fits this. Now its important for everyone to fully concentrate on making no mistakes in the race and to convert this good starting base into victory in the manufacturers championship for Audi.

Dieter Gass (Head of DTM): It could hardly have gone any better than this: six Audi cars in the top eight and three of them at the very front  of course were very happy with the qualifying session. Before the weekend and after free practice, we could only dream of this. When such a dream comes true and the starting base for the race and the battle for the manufacturers championship is as good as it looks right now, we can tackle the day tomorrow with optimism.

Miguel Molina (Audi Sport Audi RS 5 DTM), grid position 1: Its always great to be on the pole position and especially here at Hockenheim in the season finale. The hard work of the past weeks has paid off. My team did a great job. Im very happy about being able to give something back. I now have a good chance of celebrating my first victory in the DTM tomorrow.

Mattias Ekström (Red Bull Audi RS 5 DTM), grid position 2: Having a strong qualifying session is always fun. And 16 thousandths of a second to the pole position isnt a large deficit. Things are looking good for the race: Im hoping for us to be able to celebrate a proper Audi party tomorrow.

Edoardo Mortara (Audi Sport Audi RS 5 DTM), grid position 3: Im one of the happiest men in the paddock at the moment. Looking back on the problems we had in free practice, this is a fantastic result. We made a few changes after free practice and they worked out in qualifying. Now Im hoping for us to have an equally good day on Sunday.

Jamie Green (Hoffmann Group Audi RS 5 DTM), grid position 5: This was a good qualifying session for me. In the free practice sessions, we still had a few problems. They didnt make it easy to prepare for qualifying. Then things really went well  I was quick in each session. Then, in Q3, I only had one opportunity. Looking at all the circumstances, fifth place is a good starting base for the race.

Mike Rockenfeller (Schaeffler Audi RS 5 DTM), grid position 7: For Audi, its obviously an optimal result. Personally, Im not happy with seventh place. In Q2, I still drove the fastest lap but in Q3, on just one set of tires, I wasnt able to repeat it. That was a shame. Somehow grip was lacking. Im hoping for a good race.

Timo Scheider (AUTO TEST Audi RS 5 DTM), grid position 8: Congratulations to Miguel (Molina) and to Audi on this solid team performance. Personally, we need to analyze why I wasnt able to improve anymore. Quite to the contrary: in Q3, I was three tenths of a second slower than in Q2.

Adrien Tambay (Playboy Audi RS 5 DTM), grid position 11: After having been on pole here in the season opener in May, eleventh place obviously isnt what Id been hoping for. In Q1, I still managed setting the third-fastest time  that was okay. Then, in Q2, I made a few minor mistakes and in a tight racing series like the DTM that makes you lose a lot of ground. Its really a shame but Im going to attack again tomorrow in the race.

Nico Müller (Audi Financial Services RS 5 DTM), grid position 18: After free practice, I actually had a good feeling. Unfortunately, in qualifying I really wasnt making any headway right from the beginning. The car felt a little sluggish. The time simply wouldnt materialize although I hardly made any mistakes. Then, in Q2, there was a problem with my set of tires. An improvement was no longer possible. Tomorrow, well just try and make the best of it.

Hans-Jürgen Abt (Team Director Audi Sport Team Abt Sportsline): An incredible day for us with three of our drivers in the top three places. Im totally happy that things went this way. You could tell that we did a lot of work in the free practice sessions  and that paid off.

Ernst Moser (Team Director Audi Sport Team Phoenix): A superb result for Audi with a view towards the manufacturers championship. We managed to get both cars into the top eight, unfortunately only in positions seven and eight. The times in Q3 werent good anymore. We need to look at why that was the case. But on the whole Im pleased with qualifying.

Arno Zensen (Team Director Audi Sport Team Rosberg): A great result for Audi: six drivers in the top eight. The starting base in the battle for the manufacturers championship couldnt be much better. Now weve got to bring it home tomorrow. Jamie (Green) in fifth place is right in the middle of it. A little more would have been possible because the time gaps are extremely narrow at the front. In Nicos (Müller) case we need to take a look at the situation  something wasnt right with the last set of tires.