Triple lead for Audi in the DTM 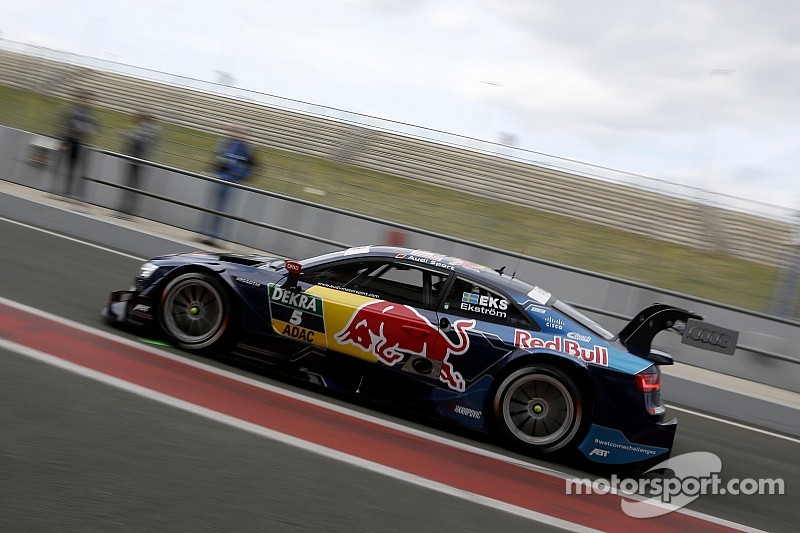 Mattias Ekström celebrates his 20th victory in a DTM race

Ingolstadt/Hockenheim – A commanding win of the opening round on Saturday, a one-two result on Sunday: In front of 75,000 spectators (throughout the weekend) Audi managed a near-perfect start of the new DTM season.

Mattias Ekström’s triumph in the Red Bull Audi RS 5 DTM of Audi Sport Team Abt Sportsline in extremely difficult conditions on Sunday was similarly distinct as Jamie Green’s success the day before. In the dry early stage, Ekström prevailed in a duel with title defender Marco Wittmann (BMW) and, after switching to wet tires when rain set in, overtook his team-mate Edoardo Mortara (Castrol EDGE Audi RS 5 DTM). In the second half of the race, the Swede kept extending his lead and crossed the finish line with a clear advantage of 7.3 seconds.

“Today was fun from the first to the last lap,” said Ekström, who celebrated his 20th win in a DTM race at Hockenheim. “My Audi RS 5 DTM was perfect. We pitted one lap too late for the tire change but that wasn’t so important because my car was so good. The conditions were very difficult today – and that’s when the experience of the old hands pays off.”

Mortara takes the lead of the standings after finishing second

Edoardo Mortara completed Audi’s one-two finish by taking second place. The Italian was leading the race some of the time but, on lap 17 while braking to enter the hairpin, let Ekström pass without putting up a fight. Following positions four and two in the season opener, he is now leading the overall standings. “I saw that Mattias was faster and didn’t want to jeopardize our possible one-two result.” A smart decision because on the last lap Mercedes driver Gary Paffett almost caught up with him.

Mike Rockenfeller in the Schaeffler Audi RS 5 DTM of Audi Sport Team Phoenix started from the pole position but didn’t have a perfect set-up for increasingly wet track conditions. Following a gripping battle with Marco Wittmann (BMW) and Robert Wickens (Mercedes-Benz) in the final stage, ‘Rocky’ finished the race in sixth place and, like the day before, scored valuable points.

Saturday’s winner Jamie Green in the Hoffmann Group Audi RS 5 DTM of Audi Sport Team Rosberg battled his way forward towards the top ten but in the end scored no points in 13th place. Timo Scheider, who had started with a bruised right hand, set the fastest race lap. In the AUTO TEST Audi RS 5 DTM, he took twelfth place following a difficult race and body contact with a rival that caused him to spin shortly before the flag fell. Miguel Molina (Teufel Audi RS 5 DTM) and Nico Müller (Audi Financial Services Audi RS 5 DTM), after tussles and a drive-through penalty (Müller) were beaten below their potential in 18th and 19th place. Adrien Tambay had to park his Playboy Audi RS 5 DTM after twelve laps due to a suspension issue.

“This was a tremendous start of the season for Audi in the DTM and, following our victory in the thrilling WEC race at Spa, a perfect weekend for Audi across the board,” said Dieter Gass, Head of DTM at Audi Sport. “We had the fastest car both on a dry and a wet track and we clinched two poles and two victories – on Sunday even a one-two. We’re the front runners in all three classifications, even heading the drivers’ standings with three drivers. You could hardly wish for more.”