Why Audi has dropped down DTM's pecking order 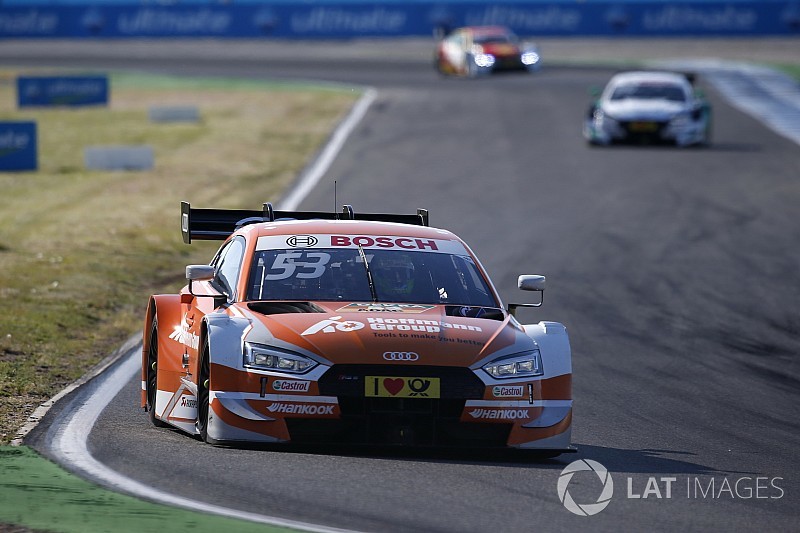 BMW and Mercedes shared the first wins of the 2018 DTM season as the new regulations relegated last year's dominant force Audi to also-rans, baffled by the sudden drop in form.

Having feared that a simplistic common aerokit and conventional suspension would "hurt" it more than others, Audi confirmed those worries at Hockenheim as the DTM field grappled with a 30% reduction in downforce and smaller set-up windows.

That largely ended the DTM’s long-held perception of “Formula 1 with a roof” as various winglets and aerodynamic devices disappeared overnight.

It immediately benefitted Mercedes, which had shied away from the high-cost development that Audi used to find the DTM-leading aerodynamic advantage that took it to a clean sweep of the titles last year.

Audi’s Jamie Green explained to Motorsport.com where Audi had to adapt compared to its rivals.

“All the details around the front flicks - the little winglets we had on the front – we now have one and it’s half the size of what it used to be,” he said. “We used to have two per side and they were big.

“There are lots of other little details around the splitter, underneath the splitter. All the side channels between the front wheel and the rear wheel are different now.

“We used to have air ducts taking air into the rear wheel arches which have now gone. So, massive difference.

“We also used to have some details on the front wheel arches that shape the air around the car, which have gone now.”

“You look at the car now, it’s a lot more basic and clean with a lot less details, flicks and winglets that were all giving us grip.

“So, that’s mainly bodywork and a little bit under the floor but it’s a big percentage of downforce loss."

He also added that the suspension also changed Audi’s approach.

“The suspension used to be more complicated,” Green said. “So there was obviously a lot more things to think about with set-up, whereas now you’ve got four springs and an anti-roll bar on each axle, so the car is more simple now.

“There are less things to work on, so it’s a bit more straightforward to set-up and our optimal set-up is just different to last year.”

The removal of all those designs meant that Audi suffered from oversteer and excessive tyre degradation through Friday and into Saturday as Mercedes took pole two tenths clear of BMW on Saturday.

Reigning champion Rene Rast was able to finish ninth and improved to second in qualifying on Sunday but with the caveat that Audi sacrificed race pace.

When Mike Rockenfeller took an opportunistic second, Audi was at a loss to explain its turnaround. But race one winner Paffett suspects Audi simply had more to lose.

“To be honest we [all three manfuacturers] got handed the aero package and put it on the car,” he said. “I don’t think it was that complicated, I think Audi had more downforce to lose than we did.

“We have all been given the same aero package and we’ve all gone to try and maximise the parts we’ve been given. At the moment, it seems Mercedes has done a better job of that.”

BMW added that it expected a learning curve through the season, and Timo Glock suspects the picture would be clearer in races following the similar Laustiz.

"At the end of the day you can say everyone had one proper test because Vallelunga wasn’t really one [due to poor weather]," BMW Motorsport Director Jens Marquardt told Motorsport.com. "It helped the [ITR] test was here at Hockenheim and the conditions are not very far away [in the races].

"It will be a learning curve through the year and we have two new tracks on the calendar [Brands Hatch and Misano] which will be a challenge for everyone.

"At the end of the day, you want to have things a bit mixed up and you don’t want to know at the start of the season how it will go."