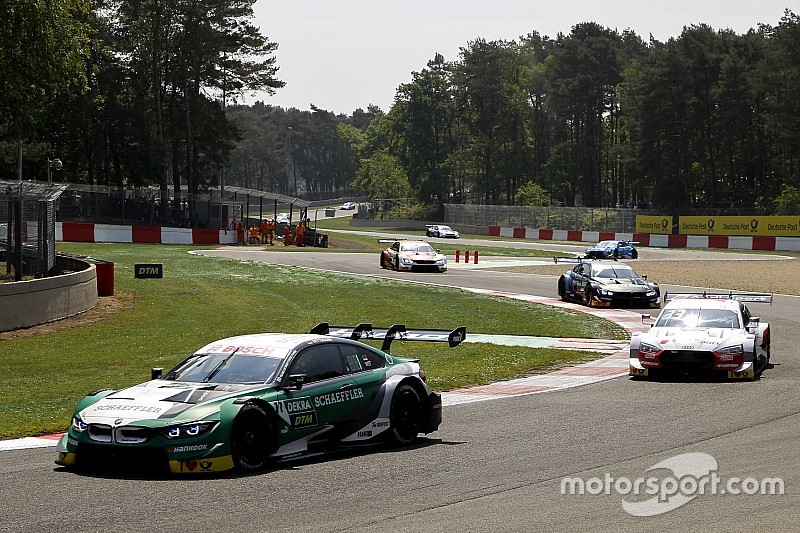 Marco Wittmann has apologised to Audi's Robin Frijns for the collision that earned him a drive-through penalty in the Zolder finale.

The BMW driver opted to stop later than the majority of the DTM field and led the race before pitting on lap 16 of 39 in a bid to use fresher tyres to move up the field. Wittmann moved into a battle with Frijns in the final third of the race, with the Audi driver suffering from a reported power loss.

The two-time DTM champion moved to the inside on the sweeping Turn 1 bend but made contact with the rear-left corner of Frijns's Audi, spinning the car off the track onto the grass.

Wittmann, who finished 13th after serving his penalty, told Motorsport.com: "I stopped quite a few laps later than all the rest around me, I had the fresher set of tyres. I could really put some pressure on Robin and I fought him quite hard at Turn 1.

"He had to take the inner line, I chose the outside line. Then I tried to cross him mid-corner which, actually worked quite well at that stage. But then he went into the corner with an understeer moment, and more-or-less drifted into my car, and I couldn’t avoid him anymore.

"I’ve chatted to him and he said he had a power loss at that stage. He’s not even angry at me. He said it was a shame that I got the penalty, I apologised but he said anyway he didn’t have the drive [after losing power].

"It’s a shame, but that’s the rules. I spun him and around and destroyed his race even if he would not have finished with the power loss."

Frijns confirmed the power loss problem to Motorsport.com and said that he had overworked his tyres battling Phillip Eng, who went on to finish second.

"I had to defend [from] him [Wittmann] at Turn 1 and yeah I went on the exit on the apex, with no power, there was nothing there in my car which is why he hit me and I spun around," Frijns said.

Asked if he felt Wittmann's penalty was fair, Frijns said: "Yeah, he spun me around. If you do that you always get a drive-through, which is logical. It’s how it goes."