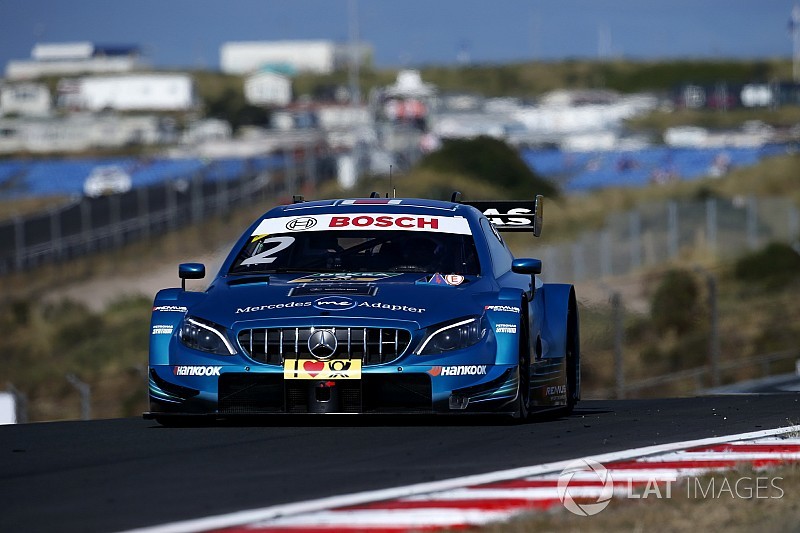 Mercedes veteran Gary Paffett extended his DTM series lead with victory in the first race of the Zandvoort round.

Paffett was supreme on the Dutch circuit, and was never headed other than during the pitstop sequence as he led home a Mercedes 1-2-3-4.

Poleman Paffett came under heavy pressure from fellow front-row starter Pascal Wehrlein for the opening eight laps, before Wehrlein made his pitstop.

Paffett pitted one lap later without problem, but Wehrlein had lost five seconds during his stop, dropping him behind Paul di Resta, who had run third from the start.

Wehrlein slashed the gap to his two British Mercedes stablemates, but then there was a safety car just after half-distance when Nico Muller, who had been leading the Audi charge in a net fourth position, got a puncture and plunged head-on into the tyres at the Gerlachbocht right-hander.

Extraordinarily slow work in locating a flatbed to rescue the stricken Audi meant the field droned around for ages, leaving just nine laps of action to the finish.

Rene Rast was the only driver not to have stopped, and the reigning champion’s Audi was even pulling away from the leading Mercedes trio.

It had looked as though Rast could rejoin after a late pitstop and score an extremely good result, but the timing of the safety car well and truly scuppered him.

After the restart, Rast held on at the front before making his inevitable stop with one lap remaining, allowing Paffett back in front.

Paffett held the gap to di Resta at seven or eight tenths for most of the restart, finally taking the flag 1.4 seconds clear.

Di Resta had rubbed panels with Wehrlein into Tarzanbocht at the restart, and then Wehrlein lost out in another bodyswiping moment to fellow Mercedes man Lucas Auer on the exit of the corner.

Auer therefore took third from Wehrlein, while local man Robin Frijns benefited from the misfortunes for Muller and Rast to be top Audi driver in fifth.

Timo Glock was the leading BMW challenger, although he had Marco Wittmann for company for most of the race as they took sixth and seventh ahead of another BMW, that of Augusto Farfus.

Joel Eriksson made good progress after the restart, the BMW rookie moving up to ninth, while Audi’s Jamie Green completed the points scorers.

Title contender Edoardo Mortara, who suffered a broken brake-balance adjuster in qualifying and started last, could make little progress in his Mercedes and finished 13th.