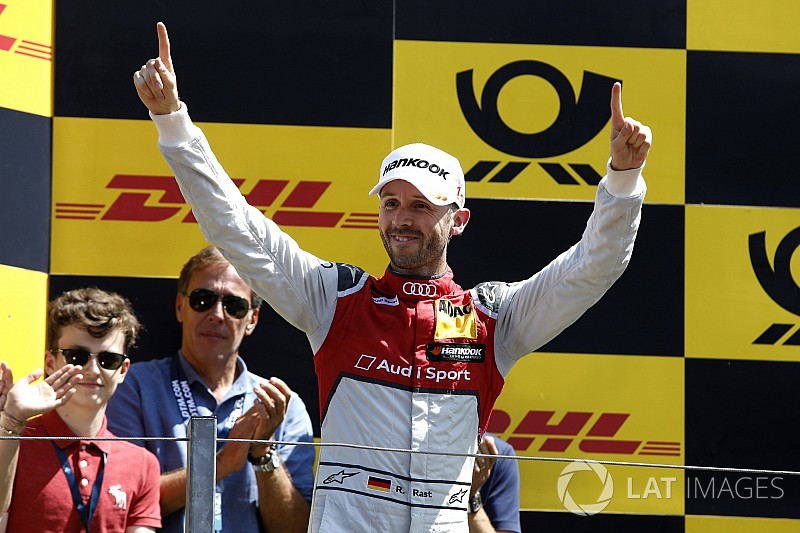 Paffett was sensationally quick at the start, scorching away from pole position to open 1.6 seconds on the BMW of fellow front-row starter Philipp Eng on the opening lap.

From third position, Rast immediately dived for the pits at the end of lap one, giving himself a clear track but having virtually the whole race to make his second set of Hankook tyres last.

Paffett was five seconds to the good after five laps, but by now Rast was lapping faster and, by the time the Briton pitted at the end of lap 10, it was apparent that the Team Rosberg-run RS5 would move in front.

Paffett’s stop wasn’t the quickest either, which meant that he was 2.3s adrift of Rast by the time he completed his first lap after his stop.

The Mercedes veteran brought the gap down to 1.6s, but Rast began to stretch away again before there was a safety car after Jamie Green locked up and punted Bruno Spengler’s BMW into the gravel trap at Tarzanbocht.

The later stoppers had just pitted by this stage, leaving Rast to lead Paffett and Paul di Resta’s Mercedes at the restart.

For most of the rest of the race, Rast maintained the gap at just over half a second, but Paffett trimmed it to 0.4s with three laps remaining, before finally the Audi pulled away again and crossed the line 0.8s to the good.

Eng lost time in the early laps defending his second place furiously from the Mercs of Pascal Wehrlein and di Resta, while Wehrlein also lost ground by running relatively deep into the race on his first set of tyres.

Farfus benefited when Wehrlein, who had just emerged from his stop, had a double contact with Nico Muller’s Audi, Farfus swooping to pass both in one go.

Wehrlein eventually took sixth from Muller, who earned the black-and-white warning flag for his stout defence of seventh from the Mercedes of Edoardo Mortara, who was briefly forced off track.

Lucas Auer was ninth for Mercedes, with early-season title contender Timo Glock rounding out the points scorers – the BMW man was running last but one when the safety car emerged, and took a worthwhile punt on a second set of new tyres to make up some positions.

Glock also benefited from late problems for Mike Rockenfeller, whose Audi was running seventh when it lost time and he was forced to make a second stop, and Marco Wittmann, who was ninth at the restart when his BMW sustained a front-left puncture in the jostling after the race went green.