After three hours of race, Murphy Prototypes takes its first victory in ELMS, with the ORECA 03 driven by Jonathan Hirschi and Brendon Hartley.

Murphy Prototypes couldn’t wait to notch its first victory, and now the Irish team has done it, adding its name to the European Le Mans Series list of winners! 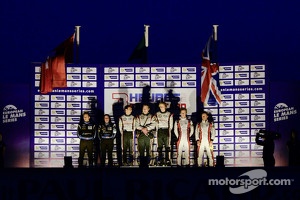 After a superb comeback from Brendon Hartley, who had taken over for Jonathan Hirschi, the team took the victory in the 3 Hours of Paul Ricard with an ORECA 03 powered by the V8 Nissan prepared by the engine department of ORECA.

It’s the eighth success this season for the « Made in ORECA » chassis. With the Alpine A450, a car designed and built by ORECA, Signatech-Alpine finished fourth and in the process took the Teams title with Pierre Ragues and Nelson Panciatici taking Drivers honors.

Boutsen Ginion Racing takes fifth place ahead of SMP Racing and Race Performance. Co-leaders in the title fight heading into the race weekend, Thiriet by TDS Racing was unable to challenge for the championship when a wheel became loose early in the race, but still finishes second on the year.

David Floury, Director of ORECA Technology : "Congratulations to Alpine on their ELMS championship. It’s a great and deserving reward for the Signatech-Alpine team. We are proud that Philippe Sinault and his team had the confidence in us to choose the ORECA chassis, and we’re also happy that it has turned out to be a great return for the brand to endurance racing. « We are also happy for Murphy Prototypes who finally tasted the victory they’ve been chasing all season.

They had come so close on several occasions, but now it’s finally done, and it’s deserved ! We are disappointed for Thiriet by TDS Racing, who were unable to fight for the title in the end. Aftet this 8th win this year, including for ou engine department, ORECA’s objective is now to be crowned LM P2 world champions."

Brendon Hartley (Murphy Prototypes, ORECA 03-Nissan #18), 1st LM P2 : "I’m very happy to be on the top step of the podium. We have the feeling that we really deserved this win. We’ve been so close before and we’ve experienced a few disappointments, but this time it’s done.

The guys worked really hard and I’m very proud of them. It’s nice to finish the season on this note. The race wasn’t as easy as it looked. In fact it was a bit difficult. I pushed as much as I could, and I was able to pass the competition by taking them a bit by surprise. To take the checkered flag for the win was really emotional for me!"


Starting second on the grid after missing out on pole by just a tenth of a second, Murphy Prototypes keeps its position despite a chaotic start. The Thiriet by TDS Racing entered by ORECA 03 is still in third, while the Alpine A450 loses one position, in contrast to Boutsen Ginion Racing who takes to places away from Race Performance and SMP Racing. After fighting with Jonathan Hirschi, Mathias Beche is forced to give up third place at the end of the first 15 minutes. The Swiss driver is forced to pit 10 minutes later : he has lost a wheel and rejoins the race after about 10 minutes.

After the first round of pitstops, the Murphy Prototypes ORECA 03 runs in third place, ahead of Signatech-Alpine and Race Performance, who has just passed SMP Racing. The running order remains unchanged until the halfway point, with driver changes. In the process, Signatech-Alpine makes another stop to replace a broken steering wheel.

Now behind the wheel of the No.18 ORECA 03, Brendon Hartley is about 40 seconds behind the leader. The Kiwi driver pushes and reduces the gap lap after lap. Reaching the No.38 Zytek and No.43 Morgan at the start of the third hour, Hartley passes both in the same lap ! Only 48 minutes left in the race.

As the last pitstops are performed, the running order remains unchanged. Murphy Prototypes leads, while Boutsen Ginion Racing is back in the fourth position, ahead of Signatech-Alpine and Race Performance.

After three hours of race, Murphy Prototypes takes its first victory in ELMS, with the ORECA 03 driven by Jonathan Hirschi and Brendon Hartley. Ending the day just off the podium after a late passe with 12 minutes to go, Signatech-Alpine is declared champion with the Alpine A450 – developped and built ORECA – driven by Pierre Ragues and Nelson Panciatici. With a very good performance, Boutsen Ginion Racing complete the top 5 with Kapadia/Kuppens/Swift. SMP finish sixth, ahead of Race Performance who served a stop and go penalty in the race’s final moments.