Mathias Beche set the fastest qualifying time in the European Le Mans Series' first race of the 2012 season. With a time of 1:48.171, he and Pierre Thiriet will start from the overall pole position at Circuit Paul Ricard in their LM P2 #46 Thiriet by TDS Racing Oreca-Nissan .

“This pole position, and this first championship point, is a nice reward for the team, Beche said. “Already last year, the competition was tough. This season, the level is even higher with big names. Along with the team, we showed that we’re able to run up front and that makes me proud.”

Third in the top LM P2 category was Tom Kimber-Smith with his best lap of 1:48.882 in the Greaves Motorsport #1 Zytek Z11SN Nissan. The champion driver was seven-tenths off the pace of Beche.

LM PC pole was won by Massimo Vignali in the #40 Boutsen Ginion Racing team with a 1:55.338. The class is based on the Oreca 09s. “Obviously, I’m satisfied with this result on my debut in this category. We made a lot of progress in free practice, and then ran into a few problems in the last session. As a result we were a bit worried but the team did a great job with the car,” said Vignali. 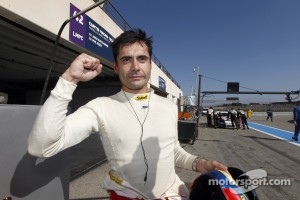 In the LM GTE-PRO class, it was Jaime Melo who set the fastest lap at 1:57.630. Melo who marks his return to the JMB Racing team had a time that blew away his closest competitors by more than seven tenths in the #83 Ferrari 458 Italia, and that was in the combined LM GTE category as Prospeed Competition is a LM GTE-AM class car.

Taking the LM GTE-AM pole was Marc Goossens in the #75 Porsche 911 RSR.

Said Melo, “I know this car well and we were able to find the optimum setup for qualifying. This result is important for the race. Marco Frezza and I are well prepared and we’re aiming for victory in our category. But we know the race lasts six hours and anything can happen.”

On hand today at the French circuit was the eight times consecutive FIA World Rally champion Sebastien Loeb. The Frenchman formed his own team with Dominique Heintz to take on Le Mans-style racing. Loeb retired on the first day of the Rally de Portugal, and was able to watch his team in their first challenge. Nicolas Minassian, Stephane Sarrazin and Nicolas Marroc will share the driving duties for Sebastien Loeb Racing; which is an impressive lineup of sportscar racing talent.

All hopes are allowed and the podium is a realistic possibility.

Sarrazin was elected to qualify the Oreca 03 Nissan and was seventh fastest in the LM P2 class. “The first result is positive,” he said. “We progressed well throughout the sessions. We need to find our marks and prepare for the race. We have to now optimise every parameter. Experience will play a part tomorrow and we will attack very hard.”

Loeb commented, “We’re in the hunt : the result shows that the team worked well and Stephane had a good lap. We have to remember that it’s a big first for the team and that everyone is discovering the car – that’s not the easiest when it’s during a race weekend. We will have a good debrief to understand and continue our learning of the car. We have two experienced drivers and a young one who holds his own. All hopes are allowed and the podium is a realistic possibility.”

Porsche tops charts in first ever night practice in Bahrain

Back in title race after Porsche 911 RSR’s double victory