Ferrari 458 Italia driver Michael Lyons will graduate into the prestigious European Le Mans Series this year with renowned team AF Corse it is confirmed today, Monday, 24th March, as part of a high-profile line-up in the GTE Class.

The 23-year-old Briton, from Felsted in Essex, will partner Italian duo Marco Cioci and Piergiuseppe Perazzini in the No.54 Ferrari 458 for the five round championship which begins at Silverstone Grand Prix Circuit on Friday, 18th April, and Saturday, 19th April. 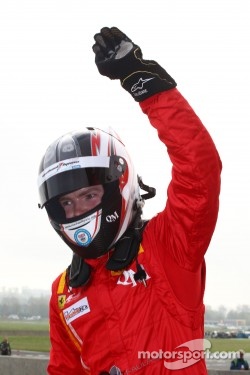 Having established a very strong reputation with AF Corse over the last couple of years, becoming Vice-Champion of the FIA GT3 European Championship in 2012 and a multiple podium finisher in the International GT Open last season, Michael is thrilled to be remaining with the Italian squad and, of course, Ferrari for his debut season in the ELMS.

“I’m very excited to be moving into the GTE class in the European Le Mans Series”, he said, “It’s a major championship and a huge opportunity for me to be able to team-up with guys like Marco and Piergiuseppe, they are both massively experienced and successful Ferrari racers and I’ll be able to learn a huge amount from them.

“I genuinely think we have a great chance to win in the ELMS in our first season together and the continuation of remaining with Ferrari and AF Corse is incredible. The team is so professional and the 458 Italia is an amazing car, plus we’re going to have Luca Masse, the chief engineer from the team’s FIA World Endurance Championship squad, working with us which is a real bonus.”

Michael’s new-for-2014 team-mates each bring masses of experience with Ferrari, Rome 38-year-old Cioci having enjoyed wide ranging success in European and global sportscar racing – not least in the Le Mans 24 Hours last year where he was a podium finisher in the GTE class.

Perazzini, who hails from Florence, is also a multiple race winner and podium finisher driving for Ferrari and, like Cioci, the 58-year-old has also climbed the Le Mans 24 Hours podium in addition to winning a variety of endurance racing contests.

“It’s going to be a great year working with Marco and Piergiuseppe”, added British Racing Drivers’ Club member Michael, “We had a very successful first test in the car earlier this month at Imola, so I can’t wait for the first round at Silverstone. Starting my debut ELMS season on British soil will be great and especially with the race being at the home of the BRDC too.”

The trio will take part in official pre-season ELMS testing at Paul Ricard HTTT in the south of France on Tuesday, 1st April, and Wednesday, 2nd April, ahead of the first race of the year at Silverstone on Saturday, 19th April.

From there, the ELMS will visit Imola in Italy on 17th/18th May, the Red Bull Ring in Austria on 19th/20th July and Paul Ricard on 13th/14th September. The season finale will take place at Estoril in Portugal over the weekend 18th/19th October.

ELMS: Team WRT take the win and series title at the 4 Hours of Spa

The redemption of Juan Pablo Montoya