James Walker and his JMW Motorsport team-mate Rob Bell took an outstanding victory in round one of the 2011 Le Mans Series at Paul Ricard this afternoon. This was James' first European sportscar race so to come out on top after six hours of hard racing is a fantastic achievement.

For my first sportscar race in Europe that was one hell of a start.

The No.66 JMW Motorsport Ferrari 458 competes in the GTE-Pro class, the top GT class of the Le Mans Series. A win in this ultra competitive class is always hard fought and James and Rob had to battle hard throughout the race.

It was Rob who took the rolling start from third place and, after managing to avoid the carnage when the lights went green but the safety car was still on track, he found himself in fourth place. He set off after the Ferrari ahead of him and took third just before the one-hour mark. 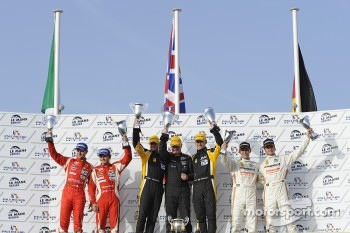 Soon after it was time for James' debut and he didn't disappoint: "I really enjoyed that," said James when he stepped out of the car. "I had a good battle with the Felbermayr Porsche and learned a huge amount about sportscar racing, especially when I lost my right side mirror, which makes turning into a corner blind very interesting!"

At the halfway mark Rob was back in the Ferrari and up to second place after the car in front received a stop-go penalty. The No.66 Ferrari took the lead when the dominant AF Corse team's No.51 Ferrari of ex-F1 drivers Giancarlo Fisichella and Gianmaria Bruni suffered a problem. James jumped in and didn't relinquish the lead throughout his run. Then a final stint from Rob would see him take it to the flag and take an historic victory; the first win for the brand new Ferrari 458.

"For my first sportscar race in Europe that was one hell of a start," said James after the race. "We've only had the car for a week and it's so special for us to have taken the first 458 win. The car was great throughout the six hours. Rob did a top job, the team didn't miss a beat and Dunlop gave us a great tyre. I'm working hard to keep learning as fast as I can and I couldn't have asked for a better start than this."