Albuquerque gets his first experience in the Zytek in a test at Estoril in Portugal next week (9-10 March) along with Dolan and Tincknell prior to them all attending the ELMS Official Tests (1-2 April).

After three years racing in the DTM for Audi Sport Team Rosberg, Audi Sport announced that Albuquerque, who began his motorsport career in 1994 and joined Audi in 2011, was switching to its LMPprogramme in 2014, contesting the Spa 6 Hour and Le Mans 24 Hour races. 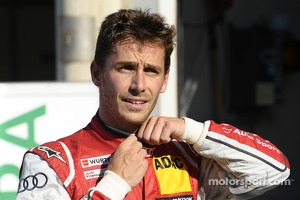 For JOTA Sport, who finished third in last year’s Teams’ Championship with Dolan and Oliver Turvey claiming joint third place in the final Drivers’ standings, Albuquerque’s signing means the team can now fully focus on a busy test schedule ahead of the season-opener at Silverstone (18-19 April).

LMP2 “cost capping” regulations mean that the Zytek Z11SN will essentially be as raced so successfully last season.

JOTA Sport is the racing division of the JOTA Group and in addition to competing in the ELMS, has raced in the American Le Mans Series, British GTChampionship, FIA World Endurance Championship and Le Mans Series.

Filipe Albuquerque (P). Age 28. Born & Lives: Coimbra (P): “I am really looking forward to racing with JOTA Sport. I expect to learn a lot and to fight for the ELMS title that the team just missed out on last year.

“JOTA is one of the best teams in ELMS. We have in common the will to win and the [car] package is very good. For me, it's perfect to get more experience in endurance racing. It's a ‘win-win’ situation.

“I really want to thank Audi Sport for allowing me to race with JOTA and I am certain that it will help in my preparation for the Spa 6 Hours and the 24 Hours of Le Mans – I am completely focused in improving my endurance skills.

“This year marks my first year in sports-prototypes but I don't think it will be very hard to adapt. In addition to DTM, I also competed in the Blancpain Series plus 24 hour races in Daytona and Spa over the last three years.

“Of course there are some differences. I need to be prepared to drive for up to four hours consecutively, to be consistent throughout and not be so focused in doing fast, one-off laps as it is in DTM as well as sharing the car with two other drivers.”

Simon Dolan (GB). Age 44. Born: Chelmsford, Essex. Lives: Monaco (MC): “I am delighted Felipe is joining JOTA for ELMS. His speed and experience in general will help take the team to a new level and give us a great shot at winning the [ELMS] title.

“I’m naturally also thrilled to have this association with the legendary Audi Sport team – one which I hope will develop further in the future.”

Harry Tincknell (GB). Age: 22. Born: Exeter, Devon. Lives: Sidmouth, Devon (GB): “I'm really happy that a driver of Filipe's calibre completes a very strong line-up that should be a force in ELMS. I'm certain he'll immediately be very fast and consistent and I'm looking forward to working with him.

“The Estoril test will be important especially as the Portuguese venue hosts the last round of the championship. It’s also the first time JOTA has run the Zytek there.”

Sam Hignett. Partner, JOTA Group: “It is very exciting to welcome an Audi Sport ‘factory’ driver to JOTA for the entire ELMS season. There is no doubting Filipe’s pace and credentials.

“It is up to us to give him the tools to expedite his sports car education and I’m certain that he will fit in perfectly with Simon and Harry and form a combination that will be consistently competitive and one that ultimately challenges for the ELMS title.”

Dr. Wolfgang Ullrich, Head of Audi Motorsport: “I'm delighted to have this association with JOTA Sport. This team is the right one to place one of our 'factory' drivers. JOTA has already been successful in the World Endurance Championship, European Le Mans Series and at Le Mans competing in the LMP2 category for the past two years.

"It will give Filipe a better chance of developing more quickly into an endurance sports car driver by competing in the European Le Mans Series and provide him with a solid foundation in a race scenario towards his preparation for his factory LMP programme with the Audi R18 e-tron quattro.”