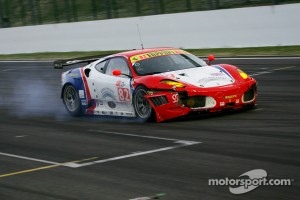 The final race of the 2011 Le Mans Series produced some thrilling on track battles, not least for the CRS Racing crew of Klaas Hummel, Adam Christodoulou and Phil Quaife. After a tough season where Lady Luck has flatly refused to shine on the No.82 Ferrari, the joy was clear to see when the car crossed the line in second place in the GTE-Am class this evening.

Phil Quaife pulled out all the stops to qualify in third place for today’s race but the man behind the wheel for the start of the six-hour battle was Klaas Hummel. He got away cleanly at the start and, after an assured drive, Klaas pitted to hand the car over to Phil. Another great drive by Phil and then again by Adam saw the Ferrari running in third place, lining up for its first podium of the year. Phil took the wheel again and made his way up to second before Adam brought it to the chequered flag, completing CRS’ Le Mans Series season.

“That result has been a long time coming,” said Adam. “We should have got a podium at Ricard, then at Spa and then at Silverstone but everything that could happen did happen! Today we finally had a race that went to plan. It’s a great result for the team and the best way to finish off the season.”

“This is a fantastic way to end the Le Mans Series season,” said CRS MD Mark Busfield. “We embarked on this series two years ago and it all came together today. Now we need to keep the momentum up as we go straight off to Atlanta this week for Petit Le Mans.”

After helping the No.62 driving squad to a podium finish at Silverstone recently, Tim Mullen will again join Pierre Ehret and Roger Wills for the next round of the Intercontinental Le Mans Cup.

“It’s great to be racing with Pierre and Roger again,” said Tim. “I haven’t raced at Road Atlanta before but I’ve been studying the track and I’m really looking forward to getting out there. It looks fast with a lot of elevation changes which all drivers like. I enjoy the American sportscar scene as there is always a great atmosphere so I hope we can go out there and take another podium like the one we got at Silverstone.”