Greaves Motorsport took Nissan all the way to the top at Estoril this weekend, winning the LMP2 Le Mans Series title in style. The point scored by Tom Kimber-Smith for taking pole position in yesterday’s qualifying session was all the team needed to seal the deal. This didn’t stop them going all out in today’s six-hour race though and they duly took second position and celebrated both the second place and the championship win on the podium. 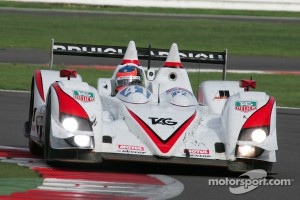 It wasn’t just Greaves flying the Nissan flag at Estoril as the LMP2 class was won by TDS Racing’s Oreca-Nissan, adding a winner’s trophy to the one they collected at Spa earlier this year. It was looking like a Nissan 1-2-3 but the Boutsen Racing Oreca-Nissan faltered on the penultimate lap after running so strongly in second place.

Greaves’ Zytek-Nissan combination has notched up an amazing hat trick of wins in the Le Mans Series, in addition to their incredible victory in the Le Mans 24 Hours in June.

“We went into this season with a clear aim to be up there fighting for wins and podiums,” said Team Manager, Jacob Greaves. “But to come away with as much as we have done is just incredible. It’s down to a combination of the right chassis, the right engine, the right team and the right drivers. All of this together has created a fairytale season for Greaves Motorsport.”

The Le Mans Series may be complete but the Intercontinental Le Mans Cup still has two rounds to run: Petit Le Mans and Zhuhai. Nissan’s 2008 GT Academy winner, Lucas Ordonez, is at Road Atlanta now, preparing for another big moment in his racing career.

More on that tomorrow…

“Karim announced his retirement from the Le Mans Series before the race today,” said Greaves. “He has achieved what he set out to achieve and has done an amazing job. He has been a real pleasure to work with and we have some fond memories from the last two years.

"Tom joined us at late notice for the first round of the season after having been out of international racing for a while. He took on the role of No.1 driver immediately and hasn’t put a foot wrong all season. His pole position lap yesterday was a special lap.

"Olivier joined us at Le Mans after having driven only 10 laps in the car so to be part of the winning team proves he has been a tremendous find for us. He was very strong at Imola and Silverstone and his performance at the start of today’s race really showed he is a star of the future.”