Fourth victory, second title and the cherry on the cake – a ticket for Le Mans! 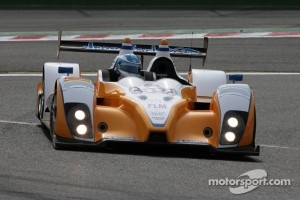 Pegasus Racing added the Teams’ title in the Le Mans Series Formula Le Mans category to the Drivers’ crown that Mirco Schultis, Patrick Simon and Julien Schell had clinched at Silverstone. At Estoril the team from Strasbourg combined efficiency and flair by scoring its fourth victory in five races in 2011. The most important thing, however, is the fact that it has booked its ticket for the 2012 Le Mans 24 Hours so Pegasus Racing’s return to the LM P2 category is quasi-guaranteed.

Despite the brilliant series of wins, the whole team had to remain vigilant right till the very end as a retirement in Portugal would have compromised everything. «We needed two points to clinch the teams’ title,» said Julien Schell. «Patrick went into the lead straight away and did a couple of very quick stints. He called us on the radio and said that the engine temperature was 105 degrees. So we had to keep a close eye on it throughout the whole race. Mirco also drove well and did not make any mistakes. He held on to the category lead and eighth place overall.»

Schell did his two stints without problems except for the rubber marbles that damaged the louvres over the wheel arches and a rearview mirror. Pegasus had to change the front bonnet twice. As the other teams in FLM ran into traffic issues or mechanical problems, Schultis was under very little pressure as the race neared its end and he took the chequered flag in twelfth place and first in FLM, a lap in front of JMB Racing. It was champagne time at Pegasus Racing!

In 2009 and 2010, the Strasbourg-based team had scored good results in LM P2 including a podium finish in Portimao, and it is determined to move back into this category in 2012. «Thanks to this title we can begin to prepare for the next season straight away. Based around our second participation in the Le Mans 24 Hours, we’re looking at two different programmes: running a car in the new World Endurance Championship or two in the Le Mans Series.»

The Fédération Internationale de l’Automobile (FIA) and the Automobile Club de l’Ouest (ACO) have joined forces to relaunch a new World Endurance Championship with races in China, the United States and Europe with major manufacturers like Peugeot and Audi topping the bill in LM P1. The LM P2 prototypes will be the stars of the Le Mans Series, which will consist of five 6-Hour events in Europe.

McLaren to tweak overall colours throughout 2011

My job in F1: Chief strategist at Sauber